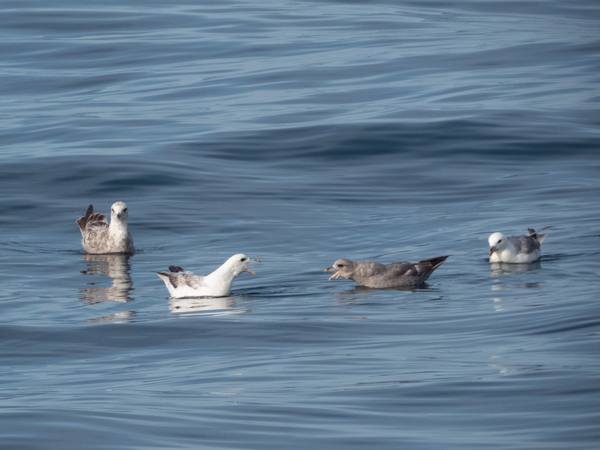 Fulmars starting drama in the flock

I woke up at 1:00 AM, mentally preparing myself for our 6 hour night watch.

Our mate, Taylor, assigned me to steer the ship, a responsibility that woke me up quickly. The stars made a brief appearance in a circle above our boat.

I tried to take Captain Emma’s advice to guide my steering using the stars, but found myself fixated on the compass at the helm more often than I would have liked. The clouds looked more like waves that night (imagine a sheet of cardboard with the top  layer peeled off).

I rotated through the deck positions (boat check, steering, and lookout) with Isabella and Xiaoni. I finally feel like I’ve reached a level of competence in my watch duties. The ship makes different sounds at night than it does during the day. The constant sloshing of waves accompanied by hums from different motors and fans.

The last hour of our watch passed by the slowest (but not in a bad way). I stood on the bow as lookout feeling cold, tired, and happy. I had exhausted my mental soundtrack having spent my last lookout shift singing a gross atonal medley of Bad Romance, American Pie, and snippets from The Fiddler on the Roof. I tested a number of standing positions to relieve the tension in my shins and shoulders¬¬--squatting was the most effective. After Sandy relieved me from my post, I hobbled back to the quarterdeck and rolled into bed.

This time, I woke up to potatoes and butternut squash soup. The stewards, Jackie and Audrey, cook better on this floating vessel than I can on land.

We did mini research projects on different zooplankton we’ve been finding in our nets. I was glad to have a reason to comb through the old books that inhabit this ship.

That afternoon, I sat with Xiaoni on the roof of the Charthouse. We watched birds and played guitar. There were a lot of seabirds that day: northern fulmars, storm petrels, arctic terns, and great black backed gulls. As the ship slowed to deploy the hydrocast, we came across a flock of fulmars sitting on the water. Northern fulmars resemble fancy seagulls;  they have a more streamlined body and look like they have eyeliner on. They also have a tube on top of their beak that can filter salt water. We capitalized on this rare opportunity, spamming our camera shutters as these birds floated around us. We also heard their vocalizations; they make low chuckling noises.

Isabella and I did lab work for our evening shift.  We threw the neuston net into the water and watched as it collected bioluminescent plankton. It looked like we were catching stars. When we pulled up the net, we found the we had caught over 500 fish (we usually don’t catch fish in our neuston net). I was so excited that I palmed through the entire bucket of fish. They were small, skinny, and silver. I’m still not sure what species they were, but people have suggested silver fish. It was a good day.