Not just a Fluke – A Throwback to Our Whale Watch 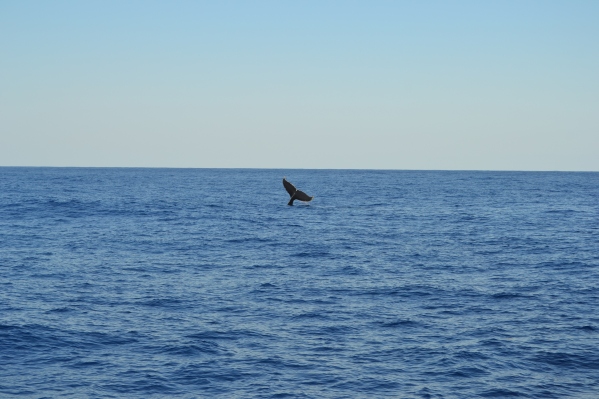 Current Position
Challenger Bank off the SW coast of Bermuda

You know you have made some great life choices when your dinner is interrupted by a surprise whale watching session.

On our first approach to Bermuda, when the call of "land ho!" was shortly followed by "whale ho!," everyone below decks eating dinner immediately dropped everything.  The mad dash to the foredeck rivaled our speed when the lazy watch hears the dinner bell (triangle). Some people had never seen a whale before and the excitement was tangible. Those who had were just as eager. After a couple of blows on the horizon and a fin sliding up from the water, the humpbacks headed out for the night while we continued onto our next scientific station. Thankfully our whale watching was not done. Due to an incoming gale, we had reached Bermuda early and had some time before we were expected to dock, so the next afternoon we motored back to Challenger Bank where we had seen the pod of humpbacks the day before.

From my limited experience with whale watching, you don't always see those postcard perfect breaches or tail slaps, but when you do get to see those types of behaviors it's absolutely breathtaking. And Challenger Bank did not disappoint. The first whale blow was spotted off the starboard bow and a large group soon gathered. Suddenly, there was one enormous humpback launching out of the water and barely 30 seconds later a second one followed. Everyone on deck yelled in unison and began flipping out as only marine scientists could. It was absolutely incredible to see back to back breaching; I honestly still can't believe we were there.

I was standing on the quarterdeck at the time and was about to head back to the lab for a bit when I noticed a strange shape in the water. The sunlight hit the water and seemed to illuminate a pale shape that resembled wings. As I peered over the starboard side, I called over to one of the off-watch scientists, Farley, and we realized that what we were looking at was a whale swimming under the boat! The "whale ho" call went up again. As the shape drifted from starboard to port, everyone followed its path around the ship and the whale finally surfaced a mere 15 meters away. The excitement continued into the afternoon as we saw more blows, surfacing, side flipper and tail slaps on the water. At one point we broke out the hydrophone to see if we could hear anything.

There have been so many times when the beauty of the ocean caught me off guard. Despite the constant flurry of activity and exhaustion from lack of sleep, it's moments like these that keep me going. As May approaches, the humpbacks will migrate north, in the same direction as our planned cruise track, eventually making it to their summer feeding grounds in the Gulf of Maine. It's sort of funny to see our aquatic neighbors from Woods Hole all the way down in Bermuda. Hopefully this is not the last we will see of them!

(Hi Mom, Dad, Austin, it was great talking to you while in Bermuda, can't wait to see you guys when we get to NYC!!!)