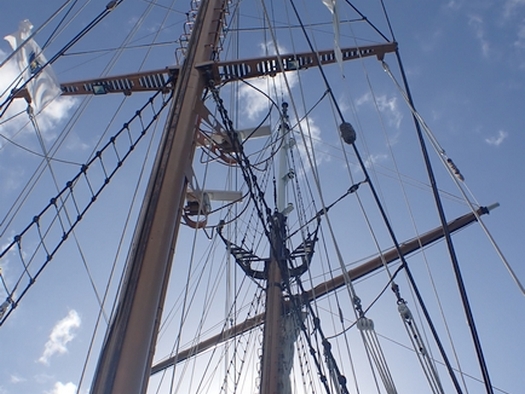 Weather
HOT. Winds at a force 2 coming from NE

Ahoy from St. Thomas! We are nearing our first week and a half on the ship, and it has been a wild ride already. From seeing dolphins breaching next to our ship, to marveling over the colorful armies of fish we see while snorkeling, we’ve been through so much together already.

Currently, I am sitting on the starboard quarterdeck post-dinner (which consisted of falafel, pita bread, tzatziki, hummus, and kale salad—yummy!) while my shipmate Addie strums a Hozier song on the ship guitar. My watch (aka B Watch) just got relieved for the day. There’s a peaceful and relaxing vibe, especially now that the hot sun is gone and the beautiful stars are out. Side note: I am planning on learning as many constellations and stars as I can, so every night I make sure to brush up on the ones I do know. First, I identify Orion, then Cassiopeia, then the planets Jupiter, Saturn, and Venus which make a straight line, and so on. I’m excited for Kevin (our captain) to teach me more soon.

The night gives me a chance to reflect on the day’s events. Today, we went on a day sail so we could make use of some of our sails as well as dispose of food scraps, waste, and make water. C Watch took us off anchor and led our ship away from St. Thomas. I remember waking up to my bunk moving a lot more than normal, a sure sign of the Cramer moving forward through the waves. After a baked potato lunch (delicious, huge shoutout to Katey and Jackie), we had class and did some emergency drills. While underway, I spent a lot of time staring at the ocean. It feels a lot like a never-ending water ride at an amusement park, which is kind of cool. Macy and I did our first lab hourly, which consists of spending six straight minutes at the quarterdeck looking for marine mammals, birds, fish, and Sargassum around the ship. Being in the lab is cool, and I like processing our samples from our reef surveys in there.

Snorkeling and conducting reef surveys have been a lot of fun, despite being a lot of work. We prep our surveys by labelling bottles, preparing dive slates and quadrats, and coordinating the game plan with our teams. Post-snorkel, there’s a mad dash to get dry, put some clothes on and head to the lab to immediately process our chlorophyll-a samples. It’s all worth it, because we get to see so many cool creatures! Fiona and I were just a few feet away from a sea turtle with remora attached to the shell during our Francis Bay survey. Addie, Fiona and I also played with a tiny, curious sheepshead porgy during our fish ID survey! So and I identified a saddled parrotfish, which is rare in this part of the Caribbean. In our most recent survey at Hull Bay, we also saw a colony of grunts hidden in a cave, flamingo tongues attached to sea fans, and huge groups of colorful parrotfish swimming over and under corals. I’m almost disappointed that we only have one reef survey left, because I have gotten really into learning all of the reef fish species. I’ve been spending some of my breaks leafing through the reef fishes book we have in the lab.

Anyways, I’m looking forward to when we’re completely underway and sailing the open ocean! There’s already so much that has happened, yet it still feels like we are just getting started. When choosing my study abroad programs, I wanted to make sure that I’d get a variety of experiences. There’s the classic Europe study abroad program (which I’ll be doing next semester in France!) and there’s SEA, the unconventional, adventurous program. Like Hux said in her last blog post, I think we’re just now truly realizing that this is going to be our reality for the next month. We’re all reacting differently, but I feel as if I am excited for the adventure ahead and am fully planning on living in the moment as much as I can.