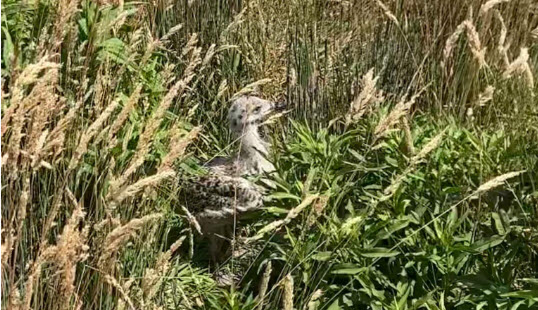 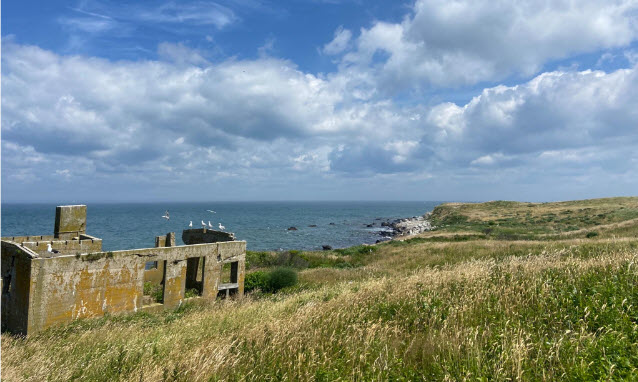 Ruined building where the people with leprosy would do their own laundry.

Today the second group traveled to Penikese Island. We learned about the history of the island which included a quarantine area for immigrants with leprosy, a school for troubled boys, and now, a bird sanctuary. We got to talk to one of the former schoolboys, Sean, who told us about his time on the island in the 1990s. He showed us where the boys would play basketball, volleyball, tend to their edible garden, and learn in the one-room schoolhouse. Now Sean volunteers on the island to maintain the buildings’ stability and helps with the island’s yearly controlled burn of the tall grasses and plants.

One of the most prominent features of the 75-acre island was the vast amount of birds. Mostly inhabited by Herring Gulls (common seagulls) and Black-Backed Gulls, everywhere we looked there were hundreds of birds. Flying around, perched on rocks, swimming, or trying to dive bomb us while walking! Some of us had to hold up bamboo sticks as protection. Another awesome thing about the island is that we visited in the middle of the breeding season, so I definitely loved seeing the fluffy gray chicks waddling around exploring the island. It was interesting to hear the birds squawk at us when we got too close to their babies, they had a distinguishable ‘this is my normal squawk’ and ‘get away from my babies!’ squawk.

One group stayed at the campus and played a pirate role play game with Ben that was set in the 1740’s. We all had a different character to play and we had to make decisions based on our characters strengths and weaknesses. I played Annie Bonn, a newly wed woman who was at sea with her husband. He was searching for a family boat, but Annie just wanted an adventure. She hated her husband, and as Annie I decided to commit mutiny against the captain of our boat. I became captain of the boat myself and I threw my husband off the boat. My crewmates and I then decided to become pirates because we wanted all the booty, but eventually got hanged by the English army for our acts of piracy.