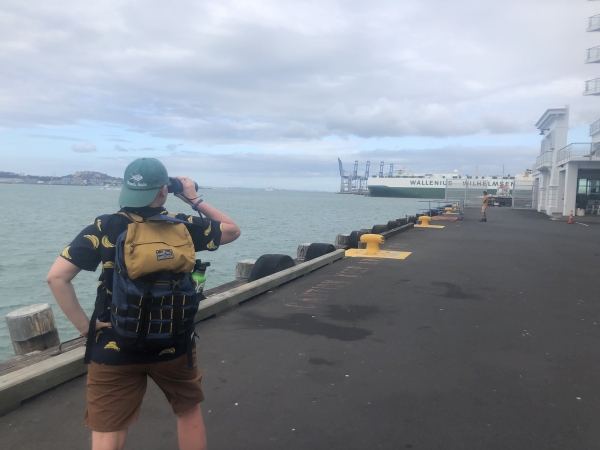 For their Conservation and Management elective course, S-290 students have continued a long range study in which they are tracking usage of the ports we visit regularly, a project Professor Erin Bryant has termed the Human Uses of Ocean Space Census. We photograph the location each time we visit and quantitatively record what we observe.

Humans have been using the sea as a backdrop of our lives for ages. From bridal parties, dog walking, or restaurant going, Princes Wharf has seen it all. Located in central Auckland, Princes Wharf is where the Robert C. Seamans was docked, waiting for us to board. We joined the ship and crew on February 14th; however we did not set sail until a few days later. As we were familiarizing ourselves with the docked tall ship, passers-by looked over the wharf railing to admire our ship, and they were probably also wondering what a bunch of 19-21 year olds were doing on such a vessel.

With my "Conservation Management" classmates from my watch, and I took a walk down to the end of Princes Wharf on the 16th of February to do our best in counting the different vessels, land uses, and human uses of Auckland Harbor. The most common type of boat we counted was by far and away recreational sailboats. Most of these sailboats were smaller, one or two sails, and were docked on the opposite side of the harbor. I find it interesting that there were so many sailboats--we estimated 90-visible in the harbor from just our one location. I suppose Princes Wharf has wonderful sailing conditions. The side where we were docked held mostly commercial vessels. There was a tall ship, the Ted Ashby, which set out one night with a wedding party on it, so my guess is that it can be rented for various types of events. There were always huge cruise ships docked in the wharf right next to us, and there were plenty of ferries, like the one I took to get to Waiheki before coming on board. Auckland is also undergoing expansive construction as they are supposed to host the America's Cup tournament next year. Visible from the wharf were 9 construction vessels.

The actual wharf was lined with restaurants as well. Our census was taken at the very end of the wharf, and we counted 28 people walking, but if we had counted closer to where the Robert C Seamans was docked, the number would have been in the hundreds. There was a hotel right above us that hosted many people, which included a bridal party one night; it was pretty entertaining watching them celebrate the future of their friend. Restaurants lined the wharf, including an ice cream shop, a burger place called Burger Boy, and fancier restaurants with beautiful views. The day we conducted our census it was cloudy and very windy, yet people still came out in droves to admire the beauty of the harbor.

I imagine Princes Wharf 100 years ago would be strikingly the same, as I said at the beginning: humans have used the ocean as a backdrop for generations. I imagine couples walking along holding hands, friends laughing while enjoying a drink, and maybe there were more sailing vessels than there were engine-powered ones. I do wonder how, in the next 100 years with technological advancements, how humans will use the ocean. Will we still enjoy the simplicity of admiring the water? We haven't outgrown that pleasure yet, and I hope that the people of the future enjoy just looking out at sea as much as I do.