Rays, Sharks, and Boobies – Oh My! 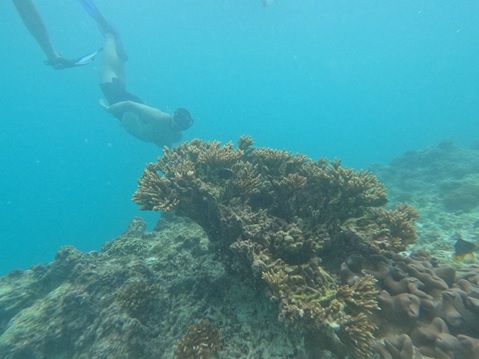 A nice underwater shot of myself diving down to look at a coral while within in the channel to Palmyra.

Ship's Heading
Alongside the Dock!

Weather/Wind/Sails Up
A beautiful day with a nice breeze as well as some cloud cover to dispel some of the heat we've been feeling since we got here. All the sails are down, covered in beautiful blue sail covers while at dock in Palmyra.

I could get used to this: waking up to my own tropical paradise, 1,000 nautical miles away from one of the largest tourist destinations on the planet, on board of a 134 ft long tall ship that we just sailed across the Pacific. I still haven't gotten used to the absence of waves and the constant rocking of the ship. Taking my first steps on land the other day, I couldn't stop myself from rocking as if we were still out in the open ocean. 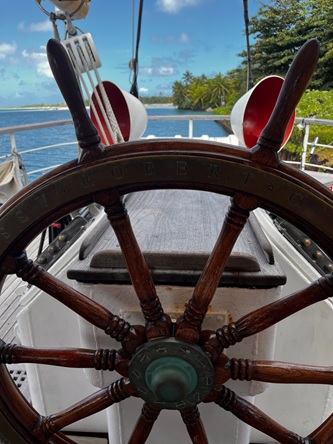 The day that we entered Palmyra, showing off the helm of the Robert C. Seamans. Taken while at dock next to shore.

It's so strange being on an island that is so far from civilizationand one which for the past twenty years has been slowly brought back to resemble the former glory that the atoll once had. Even still, when on a small beach excursion, the other day, the ruins of old WW2 bunkers and structures that dot the island seem eerily out of place amongst the tropical rainforests that cover the island.

Before we got into the atoll, I made sure to wake up early to take one last shower before we could no longer dump any grey water overboard and prepared to see land for the first time in two weeks. Straining my eyes, I searched all morning till I finally caught glimpse of a sliver stretching across the horizon, finally shouting what I had been waiting to say all week, "Land Ho!!!"

After sailing through the narrow channel granting the only access in and out of the atoll, I wondered what else had sailed through these waters before us. Pirates shipwrecked off the nearby reef, carrying with them scores of Inca Gold, the navy while they occupied the island during WWII, or even those with yachts large enough to cross the ocean to escape the daily worries of life. Once on land we were greeted with the wreck of an even more interesting suspect, an abandoned, makeshift drug submarine which found itself within the lagoon after a storm after drifting aimlessly across the ocean.

I heard that the channel is currently filling back in with coral, and while good that the habitat is finally returning to its natural state, there still needs to be a way for scientist, and scientists in training such as ourselves, to make it to the island. They plan on transplanting the coral currently in the channel to other spots around the atoll. Hopefully I can hop on that and sign up for a stint as a diver, working to spread coral around Palmyra.

Speaking of coral, spending the day snorkeling on some of the world's most pristine reefs was an experience like no other. I'm used to diving in freshwater lakes and rivers in Central New York, which doesn't even come close to what I experienced today. The crystal blue waters amongst the active coral reef and fish population were much nicer than the zebra mussels and goby fish I'm used to back home.

This was also my first-time swimming with sharks (I'm told black tips are pretty much harmless to us). After watching so much about them and watching countless episodes of shark week as well as the entire JAWS franchise, it was refreshing getting to experience them in real-life.

We're also apparently on one of the biggest red-footed booby colonies on the entire planet. Looking at the trees around the island, the many birds nesting in the trees look more like fruit due to the sheer number that we can see. Whenever we take one of the small boats out, the birds surround us like a fighter jet escort and follow our every move.

The fact that I still have two more full days on the atoll is amazing as it feels as though Iive been here for a week already. Iim excited to explore more of the atoll tomorrow and to enjoy my own little slice of paradise for the next few days (Hopefully we get to go snorkeling at least one more time).

Oh, and Mom, Happy Birthday! I love you and miss you and canit wait till I see you again. Iill try my hand at making pineapple upside down cake again and see if I can perfect it this time. I miss everyone else back home and Iill be back before you know it. To more late-night driving sessions with the music blaring, and to seeing everyone again, love yiall.