Rolling Down to Old Maui 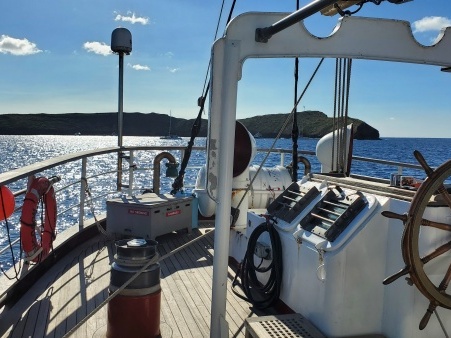 This morning, instead of receiving the regular sort of wakeup relaying time, weather outside, and finishing off with "Are you awake?" I woke up to a simple whispered message of “Kira, there are three humpback whales circling the bow.” As the whisperer (Carolyn) rushed away, I called out, “What time is it?” - “I don’t know,” she said. I decided to head up and check it out for myself.

I knew we were expecting to see humpback whales here, since they typically come to the waters around Maui to mate in this season, but it wasn’t a sure thing. Our resident whale scientist Lila has refused to make any definitive statements about whether there would be whales or not, to avoid jinxing it. This area is marked on our chart as a whale protected area, and there is a book in our library titled “The Humpback Whales of Maui,” but I hadn’t really heard anyone say, “There will be whales,” only “There might be whales.” And I guess it worked, because there most definitely were whales circling the Robert C. Seamans under the full moon in the small hours of the night. At least three of them. More like seven.

It turned out to be a little past four in the morning. There were a crowd of pajama’ed figures standing in the dark on the windward side. Silence and moonlight. When suddenly, someone said, “There they are!” We heard three loud puffs of exhalation and saw the “blows,” the clouds of the whales’ breath rising out of the water like steam out of a train. Alongside the puffs there were groans, remarkably loud and deep vocalizations, and the sight of several immense black backs rolling through the calm water, the light of the moon reflecting on their skin. It’s hard to describe in writing how large a whale is. They are the largest animals alive in this world. 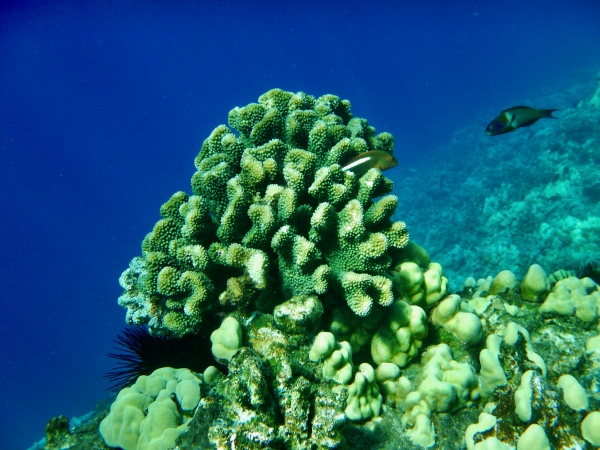 They are also the loudest. Every time a whale emerged, we also heard a number of sounds: clicks and bellows and squeals and howls. They sounded like monsters, like spaceships. I looked around to see if Katie was among the crowd: she has always been talking about how much she hoped to see whales, and how she wanted to be woken up if whales were ever sighted. Fortunately, she was awake and saw them. Every student had gotten a wakeup, and everyone stood and saw. We were all out there, watching the whales with awe and curiosity, as they circled us and investigated our ship, equally curious about us.

Eventually, I went back to sleep. A couple of hours later, I was up again on morning watch. The island of Maui (our destination for the day) was visible, along with the islands of Lanai and Molokai a bit further off. I relieved the helm at the start of watch (took control of the steering wheel), and again there was a slight change in routine. Usually the helmsperson is delivered a “course ordered” in the terms of a compass direction such as “Course ordered two nine zero” – meaning to steer 290 degrees off North (clockwise) according to the needle on the compass in the binnacle before the helm. Today, when I took the helm, the captain just came over and said “See that island there? Steer right to the middle of that.”

That island was called Molokini. As I steered the ship, the sun came up right behind it, which was beautiful, but also made it kind of harder to use it as a visual bearing. In any case, we got there, and we hove to right near it. At first we weren’t sure why: is this where we were anchoring? Then Jan, Nate, and Darcy were lowered away in the skiff to do some “reconnaissance” and the word slowly seeped out that we were going snorkeling again! We were all bouncing around with excitement – snorkeling the other day had been so incredible, the reef was so beautiful and there were so many different fish. I was in the first round of students shuttled out to the reef and the reef here was magnificent. Photo attached courtesy of Jan, our chief scientist and snorkeling guide, who brought along an underwater camera.

There was a morning snack of the most wonderful scones I’ve ever eaten in my entire life, crafted by our wonderful steward Ashley. In the afternoon, I went below to rest my eyes for a little bit and managed to miss something really exciting: the winds rose to 30-40 knots within a few minutes, and we needed to strike all the sails. I slept through the event, so I was a bit disappointed when I heard so many of my shipmates describing it as “exhilarating” and “the most exciting thing that ever happened in their life,” but I’ve already written so much about the other things today, so that’s okay. There was also a baby bottlenose dolphin today. We’re now anchored off Maui and we can see city lights, as well as the first state highway any of us have seen in a long time.

Again, lots of well wishes to my mother, father, and dear brother.  And lizard, fish, parakeets, etc. and any friends or cousins or extended family who may be reading this.  Shavua tov and lehitraot b’karov.