Sailing in the Trade Winds 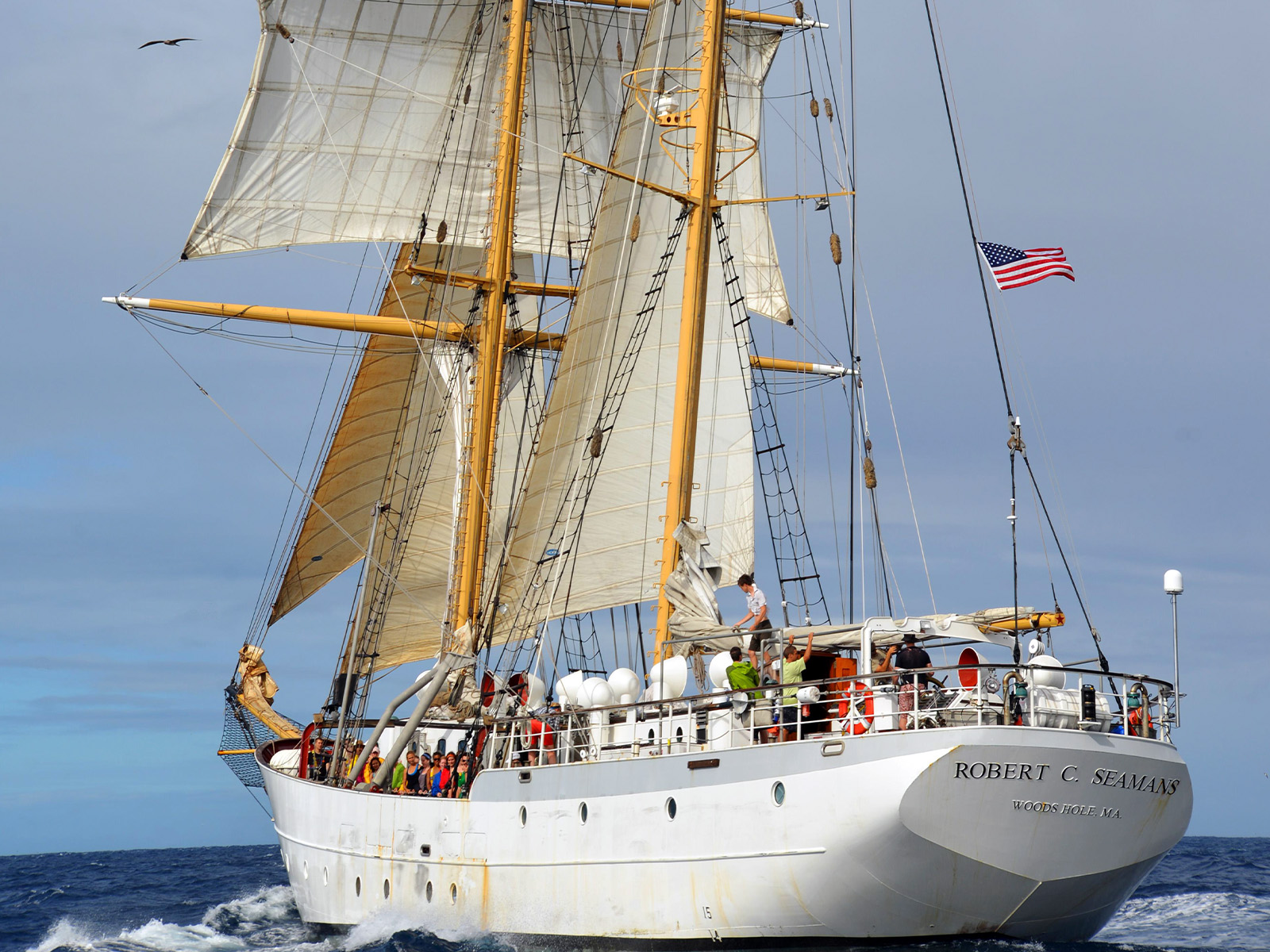 Just passed over Seadragon Ridge today. We are roughly 400 nm from Palmyra Atoll!

What a day it has been! I started off the day on Morning Watch, with a wake up at 0600 for breakfast at 0620. Breakfast was yummy; we had scrambled eggs, sausage links, banana muffins and fresh fruit including strawberries, kiwi, and grapefruit. When we got ready for our watch change with C-Watch at 0650, we found a flying fish on deck! Unfortunately, it had gotten stuck on deck at some point during the early morning. Leading up to today, we had seen a few flying fish soaring above the waves, but they were much more active today! Kevin said he wouldn’t be surprised if more landed on deck.

Apparently, as the ship moves through the waves, it scares the fish out of the water and prompts them to jump into the air. If you look closely, you can see small silvery objects bouncing above the waves, sometimes a dozen of them at time!

I was on deck for watch today, and started off on lookout. It’s really peaceful being on lookout. It may sound boring, standing around looking at nothing but waves out in the middle of the Pacific, but I find it really relaxing. When I’m on watch at night, I like to look at the stars and sometimes I can see shooting stars!

During the day, I like to watch the waves and the clouds and just be in silence for a moment. I also find the movement of the ship on the waves relaxing and very nostalgic as it reminds me on jumping on a trampoline every time we get a big wave. When I was younger, my cousins and I created a jumping game which we called the “Butt Bomb Game.” Each of us would stand on one side of the trampoline and we would all start to jump together. We would jump as high as we could, and on the third jump, we would all land on our butts. The best was when you would ‘steal’ someone’s bounce and fly into the sky!

After lookout, I was at the helm. It was a little harder today, since there were A LOT of big waves that would roll by. On average, most of the waves we saw today were about 10 feet tall. At one point, when a squall was approaching, we saw waves that were 16 feet tall! It was crazy to see waves that big coming at the ship. Every once and a while, it would hit the ship just right and splash over the side. It’s kind of funny to see the dried salt on your legs after your watch. Being in the trade winds has definitely made the trip interesting.

The ship has been rolling a lot which had made navigation below deck a little tricky. And it doesn’t help that the humidity has made the soles extremely slippery, especially in the salon. We’ve lost a few plates, but generally everything has been okay. Our things do move around in our bunks a lot though. Coming off watch at 1000, I spent some of the afternoon before dinner on the top of the chartroom reading and enjoying the weather. At times the ship would roll so much that even the windward side would be extremely close to the water. A couple of people even lost their hats today because of the winds.

Despite all the rolling, and the shifting being at sea has been an AMAZING experience! After we get back to shore, I have to go back to school for my last trimester and I’m not looking forward to it. We’ve only been on the ship and at sea for a little more than a week now but it feels like so much longer. It’s crazy how quickly everyone is picking up on everything we are learning. Especially with gybing, we gybe about twice a day, for every science deployment. At first it seemed like a lot, there were all these moving parts that had to be done in order to successfully gybe and it felt impossible that we would figure out and understand what all those steps are.

But that’s not the case. As a collective whole, my watch group has learned a lot of new skills, and everyone is willing to teach anyone who may not have been on deck at the time, or were doing something else in that moment. I’m really grateful to have them in my watch group.