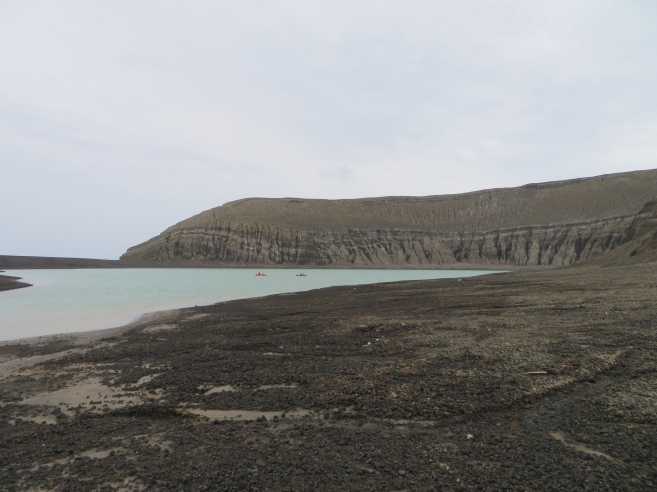 Intrepid students and SEA assistant scientists deploy the pack rafts and side-scan sonar in the crater lake at HTHH.

On September 27th the SSV Robert C. Seamans departed Pago Pago Harbor, American Samoa, bound for Earth's newest landmass, located in the Kingdom of Tonga. The ship is a Sea Education Association student sailing and oceanographic vessel with 40 souls on board: student and professional crew, faculty, a visiting scientist from NASA, and an observer from the Tongan Ministry of the Environment. The ship's destination: a new landmass formed in 2015 in an explosive volcanic eruption. The eruption deposited a pile of ash, pumice, and lava 'bombs,' building up a new landmass over the course of a month connecting the two small, uninhabited islands of Hunga Tonga and Hunga Ha'apai.  Perhaps the King of Tonga is scheming up a name for this new landmass, but for now, we'll refer to it as HTHH.

Sea Education Association has been sailing to remote ocean regions, conducting oceanographic research, and involving students in sail training and scientific exploration for over 40 years.  Our two 134-foot sailing tall-ships are each fully equipped with an oceanographic research laboratory and field sampling technology geared towards studying the chemistry, geology, physics, and biology of the ocean from the surface to deep ocean habitats.  Both ships are designated Sailing School Vessels (SSV), which means that students sail as crew, not as passengers.  The SSV Corwth Cramer operates in the Atlantic Ocean, and the SSV Robert C. Seamans in the Pacific.

Since the formation of HTHH in 2015, NASA has been keenly interested in this landmass as a rare opportunity to examine pathways of land formation and erosion in the time of 21st century remote sensing and scientific technology. HTHH is the first island formed on Earth since the availability of sub-meter resolution satellites including imaging radar and geodetic lidar altimetry. The island has persisted longer than expected, sparking questions of the erosion dynamics behind its longevity and mechanical stability. NASA's Mars Exploration Program is most interested in HTHH, as it offers a proxy for understanding important geologic dynamics on the red planet associated with water-based erosion.  One might even consider the island of HTHH "Mars on Earth."

We've now arrived here at HTHH, aboard the Robert C. Seamans, which is nimble enough to get close to the island and involve students in this work in collaboration with the Kingdom of Tonga and with our partners at NASA. 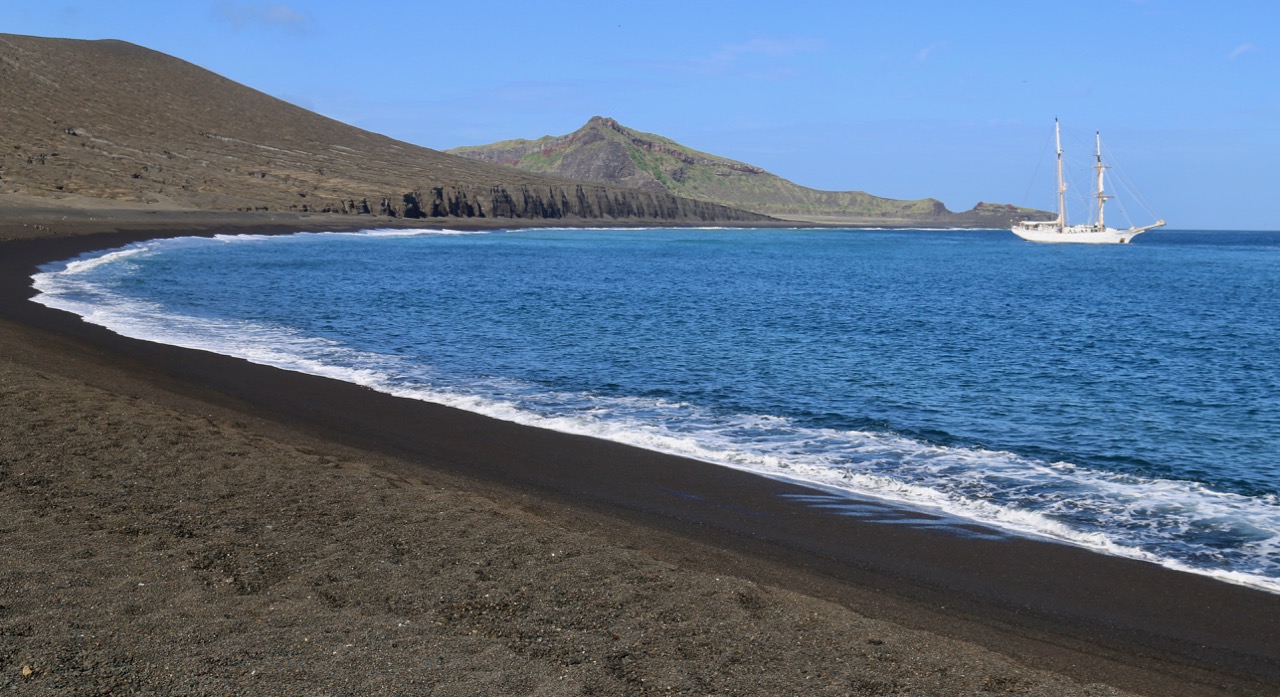 As Chief Scientist for the SSV Robert C. Seamans throughout this mission, I have the distinct pleasure of wearing many hats (educator, scientist, shipmate, and my salty blue baseball hat), and facilitating the scientific and educational elements of this work.  As we sailed south from Vava'u, the island emerged from the horizon, otherworldly, wild, and pristine. For months and months, we had planned for this moment. Now, our much-discussed mission fully materialized: a dark grey primordial-looking volcano striped with canyons, dark black saddles leading to green-tufted islands to the East and the West.

We have twenty-six eager college students as integral parts of our scientific mission: to better understand processes of land formation on Earth, so that we might understand it on other planets (eg. Mars). We'll conduct our research in partnership with NASA and with the Kingdom of Tonga. As an educator, this experience is a dream.  I'm able to guide students through the process of discovery-to invite them to be scientists, to be stewards of this place, and communicators of our work. To show them the messy, complicated, joyous process of fieldwork. These students are immersed in the pure logistics of it all - of getting people from boat to island (don't forget the sunblock, the radios, and make sure the datasheets are waterproof!). The need to McGuyver.  The need to open our eyes and question everything we see. I'm not lecturing in front of an undergraduate chemistry bench or over a microscope mimicking the scientific process.  Instead, I'm trudging through tiny volcanic black pebbles through the wind and rain with students trailing behind, wearing bright yellow foulie jackets and rain boots. I can't help but feel a bit like Miss Frizzle.

We're headed to the island's crater lake to map its depth and shape for the first time using pack rafts and a portable sonar device. We've wound up and through the canyons lining the volcano's steep walls, loose volcanic ash towering 30-50 feet above us, documenting and hypothesizing about the rocks and a suspicious white ooze coming from a distinct layer between ash and chunks of basalt.  We're asking questions, using the human tools of our eyes and senses. We're collecting data that might help to answer those questions with equipment we've personally lugged through force 6 winds in five or so small boat runs back and forth from island to ship throughout the morning. The equipment includes an ROV, two drones, highly sensitive GPS devices, datasheets, trash bags, sonar equipment and pack rafts, all to be deployed by student teams throughout the day, all to be trudged through the tiny black pebbles to the crater lake, the crater rim, the raucous wind-exposed south side beach, and the island's saddles.  Tomorrow, we'll test the newest rumor yet (although currently unsubstantiated) - Grace stuck her feet deep in the silt at the crater lake, and it was WARM down there. We're picking up marine debris (because yes, of course, despite being the newest landmass on Earth, HTHH is covered with plastic trash).

The greatest delight for me, beyond the science and the adventure, is inviting students to engage as integral members in this scientific (and very human) process of discovery.  I am so excited to share this experience on HTHH with this eager group of SEA students.  I'm thrilled to be collaborating with NASA, our visiting scientist Dan Slayback, and our Tongan observer and partners in the Tongan Ministry of the Environment. I'm so fortunate to be working alongside an amazing team of professional crew (assistant scientists, engineers, steward, and mates) sailing aboard the SSV Robert C. Seamans, without whom this work would not be possible.  I'm also endlessly grateful to my co-faculty, Captain and Chief Anthropologist, aboard as masters of our educational and sailing program.  And we're excited to share our experience with you! Please follow along for the next few days as we accomplish this most exciting mission here at HTHH, Mars on Earth.