Sails Up, Engines Off! 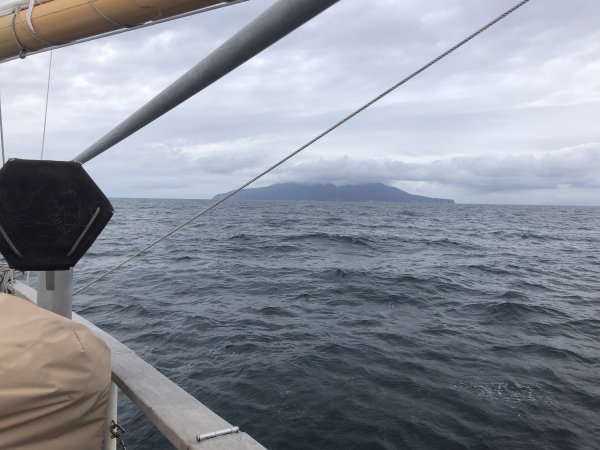 Sailing with Little Barrier Island off our starboard side.

All aboard the Robert C. Seamans awoke at anchor in Huruhi Bay this morning after standing anchor watches one hour at a time throughout the night. Gulls swiftly made their way through the sky and called to remind us all on the ship of where we are (on the ocean)! Rain had landed itself on the teak deck to foreshadow what the day would have in store for us.

Breakfast was held at 0830 which gave everybody a nice chance to get some extra sleep! I was able to wake up slightly before breakfast, allowing time to pour a coffee and do some journaling above deck. The sweet jingle of the triangle and holler of "breakfast all hands!" alarmed all that breakfast was ready to eat! I told myself that I was only going to have one serving, but at second glance I couldn't help but go for one more!

After our meal students and crew mustered into watch groups (A, B, and C) to conquer tasks below and above deck. Upon finishing our tasks, it was time to do what we have all been waiting for. set sail! C watch was on duty so they bore the responsibility of getting the Seamans under way. The port anchor was raised, and we began our voyage north with some power from the motor as well as our main stay sail.

As we motor sailed our way the waves and wind got bigger and stronger which did not sit so well with all. Sea sickness is a real thing! I am thankful to say that I do not know what it was like to feel sea sick, but to those who do, hats off to them because as soon as they did what they needed to do, they were back to all hands on deck. I trust that over time everybody will adapt and not feel this way much longer.

As the day proceeded the wind had made a favorable change that allowed us to also raise the fore stay sail giving us the opportunity to shut the main engine off and be completely dependent on the wind to bring us where we wanted to go. At this point A watch (my watch) had relieved C watch and the rain was on and off in small showers. Hourly boat checks which require a thorough inspection both above and below deck kept us occupied throughout the day.

Engine room checks may have felt intimidating at first but just a few days of being on board has led to confidence in knowing what to look for and check. We had class on the quarter deck at 1400 and our class work for the day was to raise the main sail! This was exciting and required most of the crew to achieve, but we did it! We are now sailing along making our way north with three sails set in the hands of B watch. As I sit warm and dry below deck in the library I hope that they are both warm and dry above until 0100. It is interesting and different living in a home that never rests, it's also an awesome feeling to completely trust the people on watch while others rest below deck and know that they will keep us safe.  Time for some rest in my bunk!

Shout out to mom and pops! Give those dogs lots of loving for me! Same thing to Mara and Luke, give Sophie a frito!  I miss everybody back home, but life here isn't too bad so don't worry about me too much!