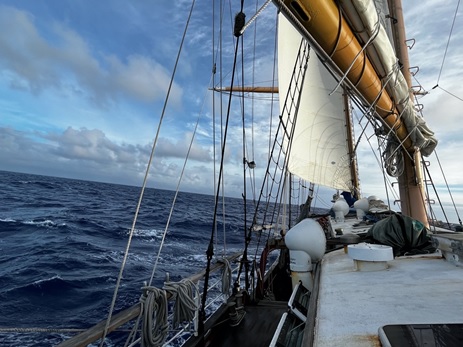 Myself, that tiny white dot near the lines of the ship was the cargo ship. 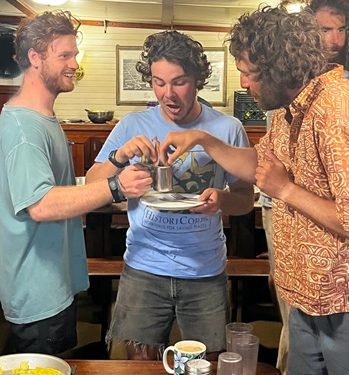 I luckily managed to capture this shot of (left-right) Sebastian, Nate, Engineer Nolan, and Engineer Henry's head in the back, enjoying some left over sausage from dinner and dipping it in maple syrup

T-8 days! The further into the trip that we get, the faster the days start to go, and the closer we get to the end. It's crazy to believe that we have spent nearly four and a half weeks at sea, out in the middle of the Pacific Ocean. For the first time yesterday, we were able to see two ships on the Horizon, and even though we couldn't see the people on the ships, it was cool seeing other "life" while out in the ocean. For most of the four and a half weeks that we've been at sea, we've only ever known the shipmates accompanying us on this journey. Apparently one of the ships that passed in front of us was an over 1,000 ft long tanker on its way to some unknown destination across the planet. It's strange to think that in eight short days we will be back into the "real" world, connected to all our friends again no matter how far away they are.

I think I can speak for most of my shipmates, that we are all excited to reach Hawaii, but at the same time I think many of us are also sad to be leaving the boat. We must start thinking about things such as our plans for this summer, doctor appointments, and even something as simple as what our plans are going to be for the next day. Ship life is very structured, always with free time to relax with your shipmates, but also in a way that you never have to plan out where you're going as our watch schedule was posted the day we got to the boat.

Our watch officer a few days ago, Kevin Murray (Kev-O), during our watch meeting out on the head rig of the ship (the net on the bowsprit hanging over the water), said that we should take the time to appreciate what we're doing and to take the time to soak it in. That was four days ago, and I can't believe how fast the time has already flown since he said that, and I believe that we are all taking that to heart now. Even though I was a little seasick since leaving Palmyra (the coral was worth it), now that I'm used to the motions of the boat I don't want to leave.

It also doesn't help that the food on board has been great so far, and I can only imagine will continue to be great until we step off the ship.

My steward day was just recently, and I got to make shepherd's pie for pie day, as well as my "famous" half-moon cookies. Most of the crew recognized the cookies to be black-and-whites as they might call them in downstate NY, but I still prefer the name half-moons.

Also, this may be a shocker to people back home in Syracuse, it certainly was to me, but a frittata in Syracuse is nothing like a frittata anywhere else. Where I'm from I guess you could describe it as an egg scramble, usually with broccoli, pepperoni, potatoes, onions, pepper, and maybe a few other things. However, everywhere else in the world a frittata is more like a quiche, but just without the crust. Maybe it's just me but my mind was blown in the kitchen, it first being revealed to me back in Woods Hole by my house mates. Either way breakfast for dinner was a success one night as you can see by the picture, I only wish they had made some Syracuse Frittata's.

To everyone else back home I love and miss you all! I'll see and talk to you soon, in just seven days or so by the time this is posted (oh wow I just realized we only have a week left as I wrote this). Also, Happy Belated Birthday to Marianna, thank you for being such a great friend! Also late happy birthdays to my cousin Jenny, my friends Lauren, and Porter, and I'm sure there's more that I've missed. Talk to everyone in a week.