Stars Above and Stars Below 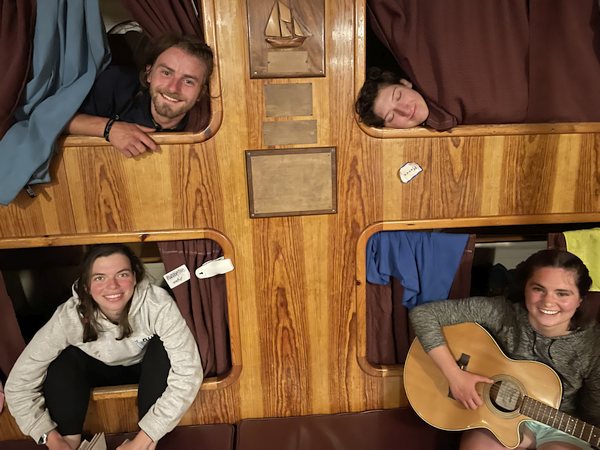 Adam, Isabelle, Elizabeth, and Maeve in their bunks

Description of location
218 nm of the coast of Cape May, NJ

It’s Maggie again. This is my second and final blog post and I am writing it on a very special day. May the fourth. Do you know what day this is? A few nerds out there probably do and kudos to them. It is Star Wars day. “May the fourth” be with you.

Okay, now that I have appeased my urge to talk about film franchises that I am fond of, I will fill you in on what has been up for the past few weeks and I will sprinkle in deep meaningful thoughts and lessons that I have been dwelling on, here and there. As that is an important mainstay of the blog.

I realized today that it has been once month since we left Woods to board the ship. It is difficult to fit this experience into such a rigid time structure as a month. It feels both longer and shorter in different ways. 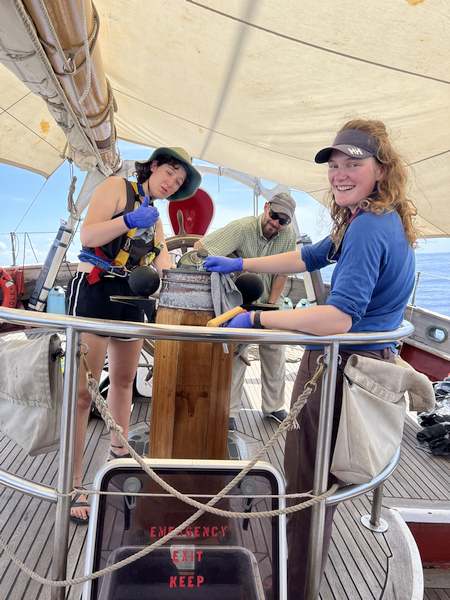 As others of my shipmates have mentioned, over the past two weeks things have really been falling into place for me. Concepts and practices that baffled me when I first stepped on the boat now come more easily to me both on deck and in the lab, such as line handling, correctly reporting the weather, and reading radar, and in the lab, identifying critters, performing molecular work on a rolling boat, understanding the steps to a meter net, CTD, and Neuston deployment, and how to correctly record all of this data.

There is certainly much more to learn but I am glad with the progress that I have made. The mates and the assistant scientists on board as well as the other staff and my shipmates have taught me a lot and I am very grateful. In the past few days we have begun the third phase of the trip, the junior watch officer (JWO) phase and I have been in this role twice now, once in lab and once on deck and it entails being responsible for the ship or the lab. Luckily though, you are not stuck up a creek without a paddle, so to speak, because you have your shipmates to rely on if you are not sure about something.

I find myself relying on them often.

At night and when visibility is restricted due to fog or other weather, there is a forward lookout posted at the bow. I enjoy this role very much as it offers a time to think and to look at the ocean, also lookout is a great opportunity to sing because it helps pass the time and it is difficult for others to hear you from the spot at the bow. I have been doing a lot of James Taylor, some Beatles, Joni Mitchel, Cher, Coldplay, Keene, assorted musical tunes, some folks songs/sea chanteys, the White Stripes, ACDC, America, The Brother Where Art thou’ sound track, some Rafi songs, some Carpenters songs, some Peter Paul and Mary stuff, and a little bit of Arrow smith, with some others in there as well including Ain’t no sunshine when she’s gone, Buttercup, Rappers Delight, Horse With No Name, Proud Mary, Mr.Sandman, I think I smell a bat, and Rock Lobster. 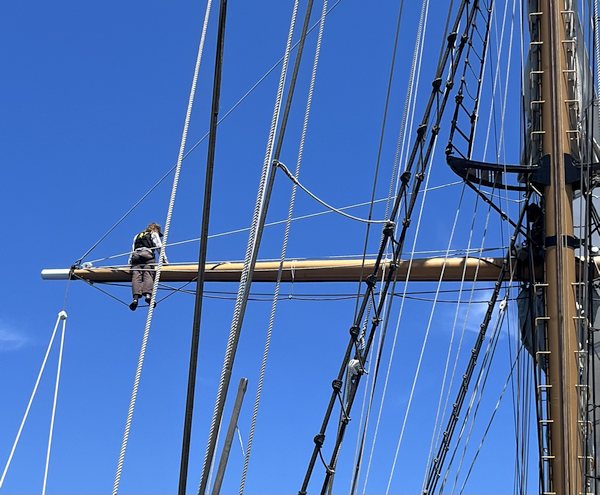 Last week, there was one night that had no moon and a very clear sky and the stars were magnificent. And, being at sea the entire sky was visible with no forests or buildings to block any of the visible constellations. My watch officer, Rocky, knows so much about the constellations and he helps to guide me through the jungle that is the night sky. He and my shipmates were pointing out the different stars within constellations as well as pointer stars and the Milky Way. Rocky also encouraged me to steer by the stars. I used Polaris, the North star, to keep us on course. I am thankful for that night and those that taught me and I hope to be able to learn more about the night sky from them before my time here is through. Okay, so that covers the stars above portion of the title. Now for the stars below.

The other night on Dawn Watch, I was at the bow and as I was scanning the horizon suddenly my attention was grabbed by a shimmering in the water off the port bow. Wonderfully, it is not uncommon to see bioluminescent sparkles as the ocean water sprays up against the bow. Small organisms in the water produce light (like fireflies do) and when these organisms are jostled you see flashes of luminescence. At first, that is what I thought I was seeing, but as I looked closer I realized that the luminescence was appearing in repeated streaks below the surface almost as if they were following alongside the boat. I saw something leap from the water followed by a spray of glowing water and I realized that a pod of roughly eight dolphins were swimming alongside the bow. It was one of the most indescribable things that I have ever seen. They stayed for perhaps three or four minutes crossing back and forth in front of the bow, visible only by the trail of light they left behind. As they played with the boat they were calling to one another with high pitched whistles and they would come and go until eventually there was only one left and then they were gone.

My watch had aloft training and our scientist, Kelly, and Mate, Rocky, showed us how to don harnesses and climb up the rigging to get to the course yard which is the lower horizontal pole on the foremast. It was amazing getting a different view of the ship. Being up so high increases the distance you are able to see. I was able to spend some time up there watching the flying fish glide from the water as the boat spooked them from underneath the waves. I hope to go a loft gain in the near future. There was a day with swells averaging 10-12 feet with some as high as 20 and as the ship was heeling back and forth as it passed over the swells the occasional wave would jump on deck soaking anyone in the way. We call this accidental saltwater shower getting doshed. I got doshed twice. It was a good experience. On Dawn watch, in lab, there was a Neuston Tow to process and there were ten jelly fish among the things collected (also in the tow was a mantis shrimp larvae). I was tasked (at my request) to bio volume the jellyfish which means putting on a glove picking up the jelly fish and measuring how much space they take up in a graduated cylinder, before throwing them back in the ocean the jellyfish were heavier than I expected and quite slimy. Would recommend.

Two nights ago we were roughly forty nautical miles from some lighting storms. The forks of lighting all along the horizon that they produced against the pitch black of the sky was truly awe-inspiring. There was no thunder, only the light. I could have stayed out there for hours watching it.

There are difficult aspects to living on the ship, such as waking up at odd hours of the night. But the silver lining is that you never do it alone, you have a community (your watch) that goes through it with you and they are there to support you and each other and that is a really nice aspect of the trip. It enables people to get to know each other very well and it reminds me of summer camp in that regard. It is also so nice to see how engaged everyone is. Maeve and I led a repeat after me song for class one day and everybody got really jazzed about it which made it really fun.

I have found that until a few weeks ago, I was very much living in the moment from watch to watch, from meal to meal, from interaction to interaction. Recently though, I have been taking a step back and really appreciating the people around me, the constant company, and the wonderful food and laughter that the galley and the stewards produce as well as other bright moments aboard the boat and how I will miss those things once I leave. At times, it is strangely easy to take for granted the fact that I am on a ship sailing on the ocean surrounded by a great group of people, and I am doing my best to be aware of how exceptional this experience is.

It will be strange to return and to learn about the status of Ukraine and Russia and of other important news. Although that conflict is likely still ongoing in some form it feels to me almost as if it is not because I am so wrapped up in my little world on this ship.

So, being out on the bow at 0300 in the morning allows me to step away from the moment and think about other places, things, events and people that still exist even though I am on a sail boat.

Although there is much more to say I must go to sleep as I am on Dawn watch again this morning. Thanks for reading.

Signing off this has been “Musings from Maggie.”

P.S. Hi Dad, Mum, and Ian, and family and friends. Hope everything is good on your end. Dad, could you please bring all the plates please if possible?

And I want to call to mind one of favorite quotes from Wind in the Willows, “there is nothing so good as messing about in boats.” Do you guys remember which character said this? Thanks!