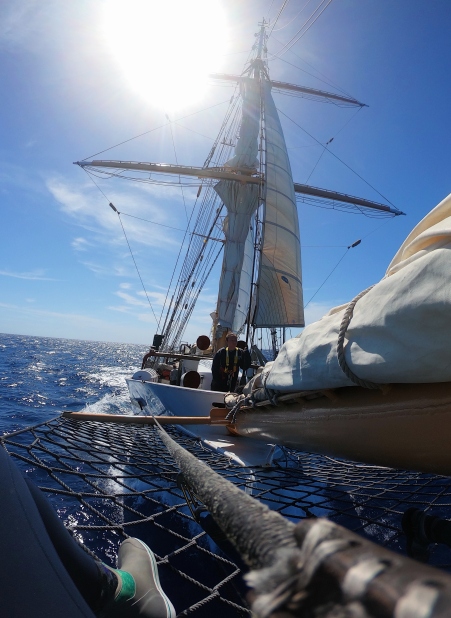 The view from Liv and I’s head rig lounge.

Ropes and lines cascade down from the top of the mast, to the end of the spreaders, and all the way down to the deck, adorning our ship like a spider web that’s been stretched across the rig. Each foot of three strand line and steel cable rope are carefully placed with consideration to the loads they will bear and the various forces acting upon them while maintaining aerodynamic advantage.

This part of the boat, the rig, is comprised of intentional and calculated angles. Some of these angles are a given; shrouds, which support the mast, must be at a minimum angle of twelve degrees to optimize the ability to resist the pressure of the wind on the sails without creating undue strain on the mast. Other angles created are more practical; lines bend and take different routes in their journey from deck to sail to eliminate chafing or risks of tangling with one another.

I have spent perhaps too much time on this trip gazing up at the rig. There is a reliability in our daily view while underway. As the blue of the sky and sea remain consistent, at times blurring the horizon, I have found that the rig becomes the most interesting thing for days on end in our radius of visibility.

The view of the ship from particular locations, like the helm, bowsprit, or the winch on the quarterdeck I like to lean against during class, each hold their own particular code of unintentional angles. Based on your position relative to the rig, the lines create their own frames of the sky. These unintentional angles become most helpful when used to provide context for the stars in the night sky.

One night, as an evening watch droned on, I found myself seeking a way to remain on course without having to keep my eyes glued to the compass. On a good day, steering as the compass bobs around can feel like a fun game of attempting to remain as accurately on course as I can while the wind and swells challenge me otherwise. On a day where I am in less of a good mood, the compass can feel a bit tedious and annoying. Evening watch occurs after dawn watch, with your twelve hours off being during the day, from 0700 to 1900. I’d made the wise decision to stay on for part of A-watch, take a very brief nap, and then hangout with Olivia on the head rig. At this point, I was somewhat tired, and the bobbing of the compass no longer felt like a fun game.

I’d steadied up on my course of 230. I looked up at the stars, seeing if I could use them to interpret changes in the boat’s position. Sailing on a port tack, under the four lowers; the mains’l, main stays’l, fore stays’l and jib, there is a small triangle formed by the mainm’st, the shrouds leading to the mainm’st, and the port tops’l yard on the forem’st. In this small triangle formed, a star landed perfectly center when I was dead on course. As the night sky spun past, I found that I had to routinely adjust my perception of where the star should align in my triangle. I was able to reference the compass, rather than watch its every small sway. When the star began to duck behind the mainmast, the boat was heading up into the wind, and I needed to fall off. As the star bobbed out of the shrouds on the other side, the inverse was true.

This small triangle has reliably become my steering guide on a clear night. Depending on the hour, our position, heading, and sail plan, different stars drift into my triangle lens. They don’t all mean dead center is my course, the way that one did that first night. However, paying attention to the place a star should take in the spaces between the rope and line has given me a greater understanding of the more finite motions of our ship and the way it reacts to small changes at the helm or shifts in the wind.

Looking through the textbooks about rigging and sail design we have in the ship’s library, there is an endless list of considerations put into every material used and its placement and function. There is no mention of the shapes formed in the sky by intersecting lines, or the different ways to utilize these shapes from the different vantage points on the boat. I have appreciated most on this trip the extended amounts of time we have to gaze up at the rig, to notice smaller details, and to find purpose in the few parts of the ship that are unintentional.

Hello to everyone at home and sending lots of love from the South Pacific! We’ve switched to the New Zealand chart and I’m looking forward to talking to you soon!