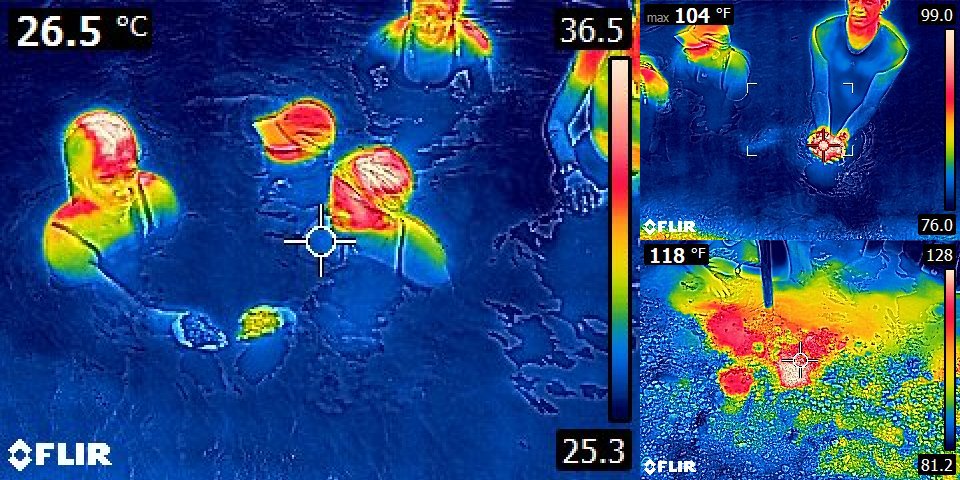 KATHERINE: Walking on deck, I welcomed our first sunny day at HTHH; however, upon reaching the island, I was greeted by hot black sand and an all-consuming heat that would last all day. Soon, as a part of the bird/vegetation team, Emily, Arielle, Cam, and I headed towards the southwest corner of the island, which boarders Hunga Ha’apai (which I think looks like a dragon lying down). Its red eye watched over us as we drew near. 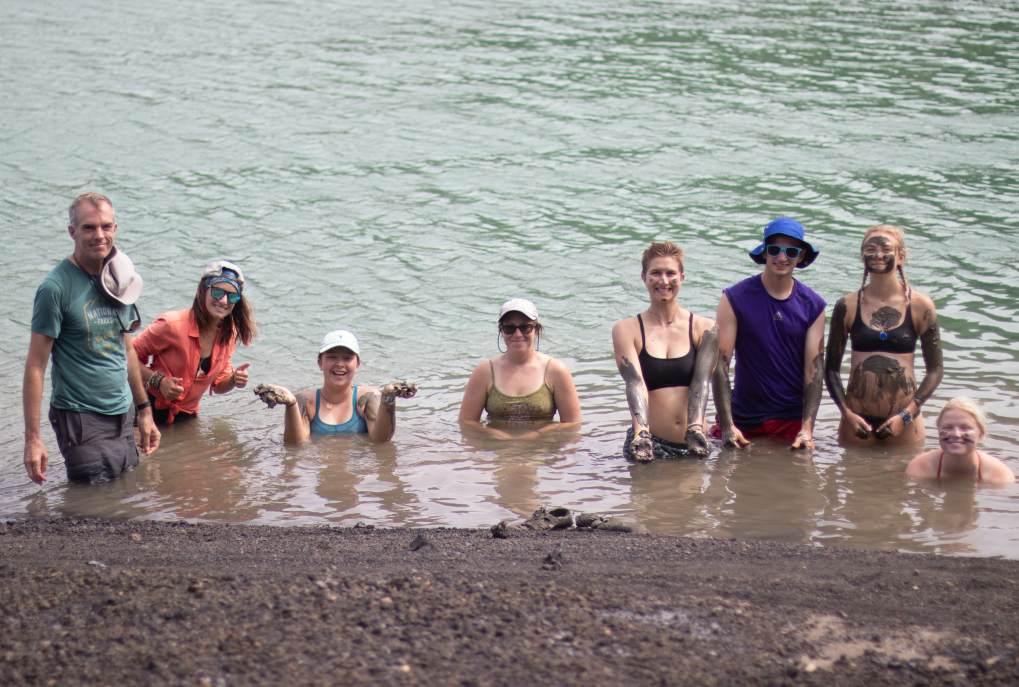 CAMERON: The morning was hot, but peaceful. The sound of the waves mixed with the calls of boobies and frigate birds. The vivid green vegetation and reds in the rocks of Hunga Ha’apai set sharply against a bright blue sky and were in crazy contrast to the deep black rocks of HTHH.

KATHERINE: Our team observed a variety of birds, from frigate birds to red tailed tropical birds to a rare red-footed booby! While I was disappointed that we did not see any barn owls, we did discover a mysterious marsh bird, which we will soon identify!

Upon reaching the southwest corner, I was shocked to discover that there was a lot of marine debris scattered along the shore, in the sand and in the grass. Our single large trash bag was not enough to pick up all that we found (shoe soles, plastic bottles, Styrofoam, buoys, long plastic pipes, etc.), so we gathered the trash into piles for a group to collect tomorrow.

CAMERON: How can there be shoes in a place where nobody has ever walked? Arielle alone, in about 15 minutes found 14 shoes (all flip flops or sandals), 13 bottles, and two buoys. It’s tough to feel impactful when I know next year more trash will be back. Perhaps HTHH, if it’s picked up each year, can be used as an indicator of the state of ocean bound trash in the area. 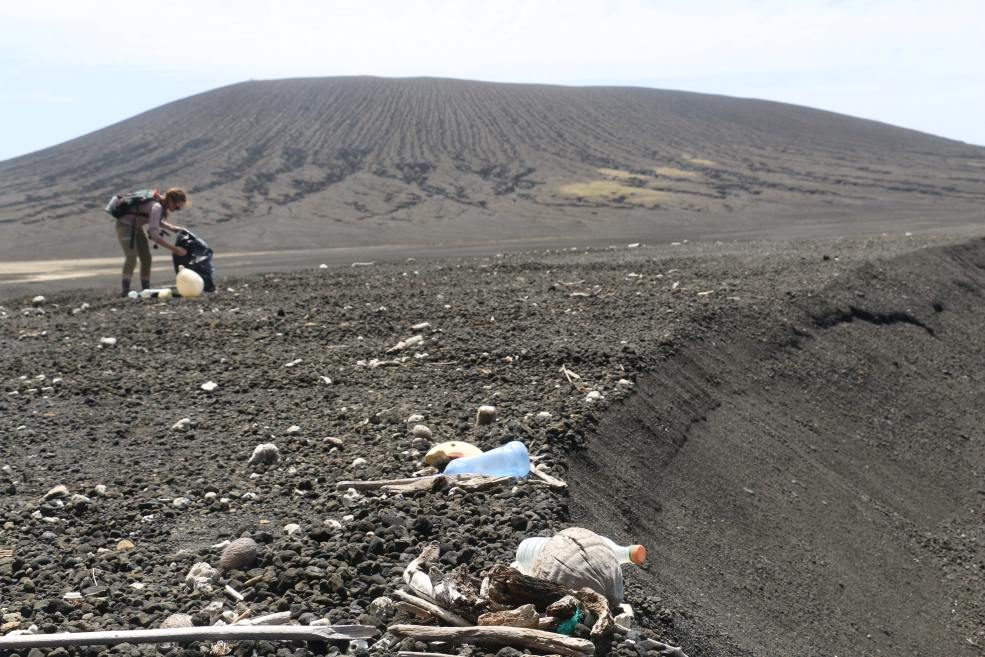 Plastic debris collection on HTHH, plastic debris is present on the foreground, with Arielle collecting trash in the background with the cone of HTHH in the distance.

KATHERINE: The afternoon was for the crater lake. Watching the still green water emerge from the cover of brown canyons was striking in contrast to the crashing blue and purple surf of HTHH’s southern shore. I had paused between the two bodies of water when I noticed a small wave break not far from shore. I barely had time to alert my companions before a humpback whale breached right before my eyes! You could hear our screams of shock and delight from our ship, the Robert C. Seamans (I’m sure!), and we soon watched her calf breech multiple times, playing in the waves.

CAMERON: Grace thought she felt warm mud yesterday when we did transects to sonar map the bottom of the crater lake… Today, it took us a little while to find the area Grace had stumbled upon and there was some doubt as to if it even existed. Then, there was an excited cry, “I found it! It’s over here!’ Sure enough, as we stood half submerged in the crater lake, our feet sunk through the soft, and uncharacteristically warm mud!

KATHERINE: I stepped into the cool lake water, surprised as my foot, then ankle, then calf, was submerged until I was knee deep in gravel and mud! Due to a lack of a sediment temperature probe, our chief scientist decided that we would use what we have - our hands, feet, arms, and legs – to conduct our research.

So there we were, wandering knee deep in sediments (waist deep in water), sticking our limbs in and out of the earth, scooping up mud and gravel beneath the sun and clouds. When someone found a hot spot, everyone rushed over (all stumbling with movement hindered) to experience the spa-like sensation. Using a thermal camera, we measured the temperature of the sediment by taking a picture of mud after lifting it out of the water. In
the end, we discovered areas of underwater sediment in our study area (approximately one third of the lake shore) that were hotter than 100°F, with the hottest section at 127°F!

CAMERON:  “I love this mud. It’s not gritty.” I marveled. “Most mud has a certain grit too it.”

“It’s probably ash,” someone replied. Wow. It probably is.

The layering of sediment in the lake was fascinating! There were dark Oreo blacks combined with lighter brown layers to create a roughly inch-and-a-half thick rubbery crust (like firm tofu). This crust sat on top of softer mud mixed with volcanic rocks that provided very little resistance to our feet. Beneath everything was a firm gravely surface that supported our weight. Near one of our hotspots, we found that the sediment was layered in an alternating gravel, mud, gravel, mud fashion.

Throughout the afternoon, we moved along the lake edge and discovered the hot areas were not uniformly around the lake. We hope to feel out the rest of the lake tomorrow. We observed some of the mud has a slight sulfur aroma. The crater lake’s salinity and temperature are also similar to nearby sea water. We set up a temporary stake to monitor the water level to help determine if the lake is tidally influenced.  Perhaps there is some
circulation between the lake and the ocean nearby.

KATHERINE: As incredible as the discoveries we are making on this island are, I think it’s important to note that there is nothing like experiencing nature’s wonders firsthand, whether in the splashes of whales or the stateliness of HTHH. So, I encourage all of you to go out and experience your local nature. I hope that you will gain the same appreciation for your natural surroundings as I have for HTHH.

CAMERON: Walking back I just was smiling, trying to wrap my head around the outlandishness of the situation. We spent the afternoon walking around getting muddy in a crater lake and just discovered something nobody in the world knew.

More about top photo: thermal images of hot mud, left: Sally and Grace compare surface mud with mud from deeper in the sediment column, while Eva, Katherine, and Olivia look on; center: Cam holds hot mud up to the camera while Eva looks off camera; right: hot mud with stake that is being used to investigate tidal influence within the crater lake. Blue in the thermal camera is not only produced by the cold, but also the underwater areas in the top of the image. (Photo: Dan Slayback)