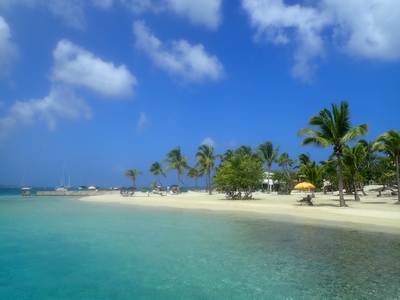 It’s our second to last day on St. Croix! We started off the day with chia seed pudding, fruit and meetings with Ben about our logbooks and takeaways from the class. When not meeting with Ben, some of us lounged by the pool while others finished some assignments before we head to sea. I finished reading a couple of books on my phone. I have a feeling I’ll be a little too seasick our first few days on board to do any reading.

After a lunch of lentil soup, quinoa and salad we met with a few people from the graduate program at the University of the Virgin Islands and a marine scientist from St. Croix. Three of the graduate students we talked to are SEA alums and all of them did their voyage on the Cramer! One of them was even a student on the very first CRX voyage.

The marine scientist we spoke to is also an underwater photographer and during his presentation he showed us the most gorgeous photos he’s taken of sharks, jellyfish, turtles and more. He also had a few insane stories to share. In 2005 he was working in the USVI tagging sea turtles. During a snorkeling trip off Buck Island in 2015 he noticed a turtle with a tag on it. While diving down to get a closer look he noticed that the start of the serial code on the tag matched the code of the tags he was putting on turtles back in 2005.

When he returned home he was able to confirm that the turtle he saw was one of the ones he tagged! Another time he was called by a fisherman who had caught a large mahi-mahi. When the fisherman had cut the mahi-mahi open there was a live Hawksbill turtle inside. They didn’t tag the turtle when they released it, so it’ll be impossible to tell if they cross paths again but it’s already happened once! Who’s to say it won’t happen again!