Taking Down The Fish 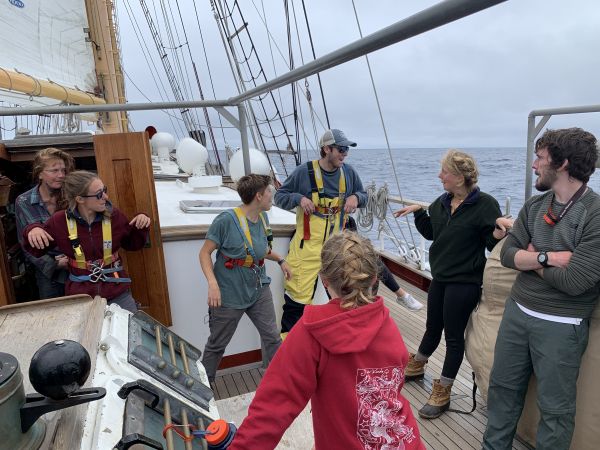 Preparing for field day with a pump up game.l

Preparing for field day with a pump up game.

Weather
Cloudy, but a few stars!!

As you may know, we haven’t had much wind the first week. We started motoring, which is very boring in terms of sail handling. A little while ago the wind picked up, and we got to sail! We had up the fish sail, which is a big sail shaped like a rhombus that stretches between the fore- and main-mast, to pick up all the wind we could. When we set it, we increased our speed more than a knot. 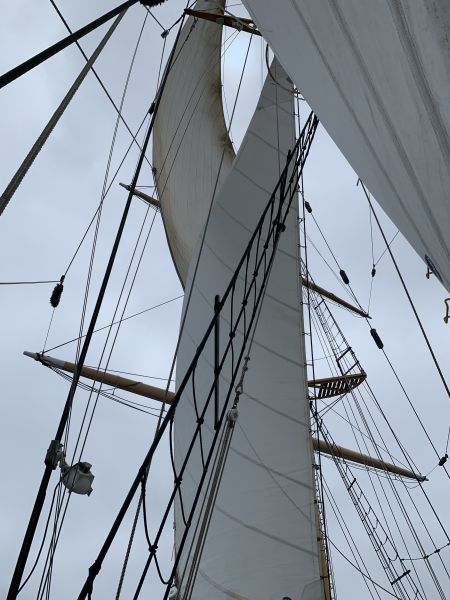 I was on night watch (1900-0100) when it was coming down. The watch and a few others were gathered outside on the quarterdeck, waiting in the dark for Cap, talking about astrology, feeling close and conspiratorial. A bright floodlight I never saw before lit up the whole deck and Cap stepped out of the charthouse a moment later, like stepping in a spotlight. The light made the night different. We could see each other in more than just the green glow of the usual ship’s light, and the floodlights were making a halo out of flyaways in Calliope’s ponytail. Cap assigned us to different lines (fish peak/throat halyards, downhaul, sheets), and walked us newbies to our positions. I had asked to downhaul, and got paired with our engineer Henry. I didn’t really understand what he was doing out of bed late at night, hauling lines. But when we started hauling at Cap’s command, I saw that we could have easily used two Henrys to pull the fish down. I’ve been getting a little stronger from hauling lines, and my abs and shoulders are sore every morning, but even though I was doing, at a generous estimate, a third of the downhaul, I was exhausted and breathing so hard I tasted iron by the end of the job.

Cap conducted us like a symphony. I love being a part of a team, feeling and watching the different lines having different effects on the sail, slowly coming to understand the previously incomprehensible order of operations with sail handling. After we got the sail down, I stood on a deck box to watch Cap and Kelsey tie the sail up-too dangerous for me to stand on the housetop at night. My muscles were burning. This night, we also saw a few stars through the clouds!

Off to sea what we can see!

The dream of sailing aboard the Robert C. Seamans came alive today in Honolulu Hawaii for the Stanford@SEA class of 2022. Now in the 20th year, 29 Stanford [...]

Off to sea what we can see!