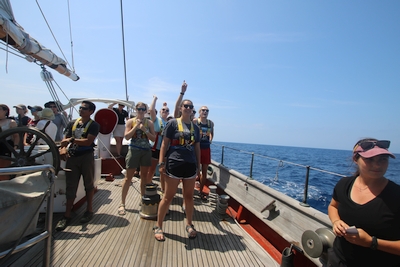 C-watch (from left to right: Kayla, Julia, Izzy, Emma and Alex) cheer their teammate on as they find a line.

Weather / Wind / Sail Plan
Light wind coming from ExS. Warm and humid with a temperature of 29.5°C at noon.

Description of location
After leaving Dry Tortugas yesterday we started to head towards the Florida Straits. Last night we were about 7 miles away from international waters so we had to make some adjustments to our course. We are now in the Gulf Stream.

Today was definitely an action filled day! I was on dawn watch today from 0100-0700. I really like dawn watch because you get to see the stars at the beginning of the watch and the sunrise at the end. Most of my watch (including myself) spent any idle time they had studying lines for the notorious line chase race that occurred today. We were informed a couple of days ago that we would be tested on how well we knew the lines on the Corwith Cramer. The “test” is called a line chase and it is when a student is shown a flashcard with the name of a line on it and they have to go touch the correct line. My watch was determined to do well… which paid off in the end. 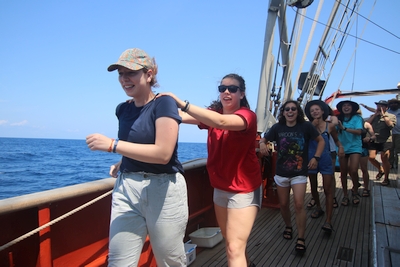 When watch was over I took a short nap and then woke up for lunch. We had falafel, pita bread, hummus and vegetables. It was delicious and just what I needed to get me going for class at 1430. You could feel the excitement in the air as we all gathered around for class today. At the start of class, Captain Alison explained the very simple rules for the line chase. Each watch was to get into a single file line and take turns finding the lines that they were shown by one of the mates. The biggest rule was to not run or you would be told to crab walk all the way back to your group!

All of the watches gathered up and did their own little cheers and chants as they prepared to start the race. Before we knew it the race was on. Each team flew through their flashcards (you could tell that everyone really studied!). My watch group (A-watch) was flying through their lines until we got to Lydia who paused for a while when she got her card. We all were wondering why she paused until she turned around and showed us that the card she had said “conga line!” That meant that we had won the line chase! We took that flashcard very literally and proceeded to do a conga line victory lap around the boat. 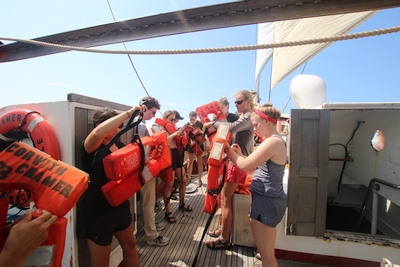 B-watch practices putting on their PFD’s.

All of the other groups finished pretty quickly afterwards. We were all celebrating with each other when we suddenly heard someone say, “fire in the galley.” That’s right, in the midst of our excitement a surprise fire drill was thrown at us. We had to quickly switch into emergency mode as we all made our way to our emergency meet up locations. Each watch has their own job to do during any emergency on the boat. My group is in charge of the fire hoses so, we got some good practice today. Shortly after the fire drill, we had an abandon ship drill where we practiced putting on our PDF’s (life jackets). We then discussed our life raft plan which was very helpful.

Dinner was shortly after class for me today, because I had evening watch from 1900-0100. When my watch started I began to notice a change in the ocean that was surrounding us. As we headed into the Gulf Stream the small waves that we were sailing on began to turn into giant swells. By 1730 most of the crew and students were on deck either admiring the beautiful sunset or staring intently into the horizon trying not to get seasick (I think everyone was doing a little bit of both). These swells definitely tested our sea legs (and stomachs) as we attempted to gybe (turn the ship away from the wind) and conduct science experiments in the dark! Needless to say the ocean is a very unpredictable place to “live” but I am very grateful to be able to admire and respect its great power.

Well thanks for reading. I hope that this blog was just as exciting to read as it was to experience!

To all of my family: I miss and love you guys a lot!! Keep eating lots of vegetables and tell Zane I said hi!