The Diamond of the Sky 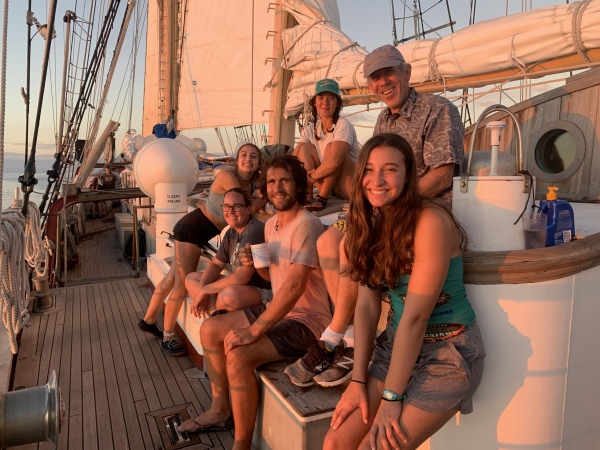 What an incredible past two days it has been on the Robert C. Seamans! We’ve had a lovely change of pace being anchored for the last two nights in Kealakekua Bay. While at anchor, our evening watch schedule is quite different; we stand hour-long watches in pairs rather than the normal six-hour watch with your entire watch. Needless to say, everyone was very thankful to get a full night’s rest.  For me, our time in the bay was the perfect way to celebrate our Pacific crossing. We also had two birthdays to celebrate – our 1st scientist Emily and chief engineer Nate! The galley team really brought their A game by cooking cheesecake and rainbow muffins for us all.

Who’s to say if it’s the double birthdays, the completion of our open ocean passage, or just the sheer beauty of Hawaii, but the Islands have been giving us so many beautiful gifts as of late. In the afternoon sun over Kealakekua Bay, we had our first swim call!! Jumping off the tip of the bowsprit and swimming in the water with my shipmates – gazing up at the ship that just carried us across the Pacific – was such a joyful moment. It might just be my favorite of the trip (so far), if it was even possible to pick a favorite. The next day we went snorkeling at the nearby coral reef, spotting all sorts of colorful fish and even a moray eel! The rainbows over the bay have been so beautiful, coupled with soft cooling tropical rain coming off the island.

Today, we weighed anchor and set sail northwest along the leeward side of Hawaii (aka the Big Island). Calm seas and puffy cumulus clouds set the scene for our first major megafauna siting in the islands: around eight dolphins were swimming and playing alongside the ship this morning. Just before crossing into the Alenuihaha Channel, Hawaii sent us its final gift of the day: the green flash!! 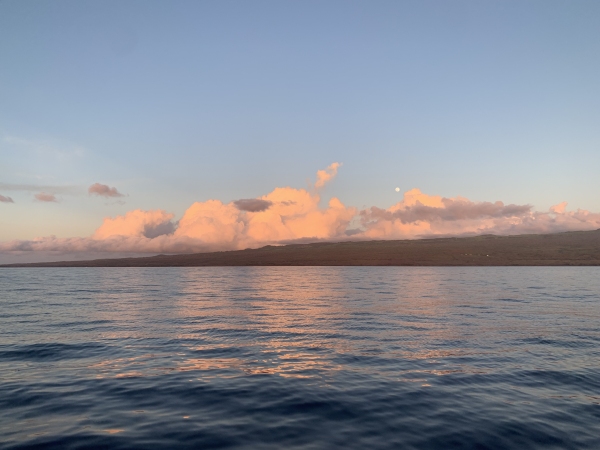 Some puffy cumulus clouds and the moon showing off over Hawaii.

As the sun started to set, giant cumulus and cumulonimbus clouds were lit in pinks, purples, and golds all around – the nearly full moon rising up from behind the island in the east.  As it is with many sunsets on the ship, most everyone drifts onto the quarterdeck – chatting, laughing, or peacefully staring out onto the horizon.

Just before the sun went down, Nate remarked that the sky might be clear enough for seeing the mysterious and elusive green flash, but there were a couple tiny clouds in the distance just blocking our view. We of course manifested them away by blowing furiously at the sun. Surprisingly, it worked, and at the very last moment a brief green sparkle flickered on the horizon. Everyone cheered, but I was a bit confused because I had never seen the green flash before. In all honesty I thought it was just a myth before this trip, but Captain Sean cleared things up for me.

In his words, the green flash is like “the diamond of the sky” – small and hard come across, but brilliant and beautiful. So now I’m thinking “green sparkle” might be a better term than green flash, but maybe that’s just me.

And who knows, maybe someone somewhere in the ocean has witnessed a crazy green flash that lights up the whole horizon, or maybe that only happens when we’re not looking… For me, exploring the islands has been the best possible way to celebrate the three thousand plus nautical miles we have sailed, the strong and unique sense of community we have built, and of course, the ship herself. It feels unbelievable we only have a few days before we end our journey in Honolulu, but I plan on soaking up every last joyful bit of it that I can in the coming days.

And to Mom, Tara, Alex, and all my family back home, I can’t wait to see you soon and hopefully you won’t be too shocked by my shaved head (don’t worry, I don’t regret that decision one bit)!