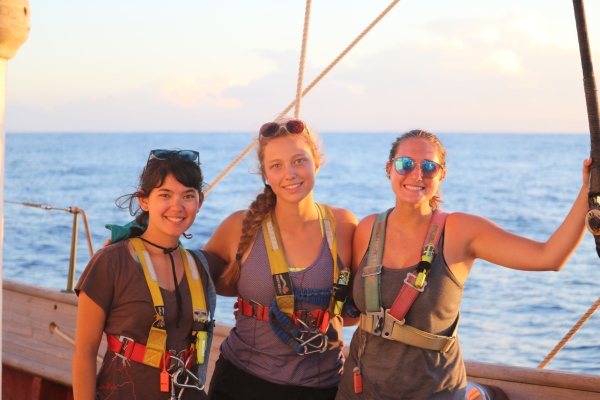 Abby, Louisa, and I right before we saw the green flash!

My day began during Midwatch 2300-0300 (11:00 pm on the 26th- 3:00 am on the 27th) where I spent a majority of this four-hour watch posted as the lookout at the bow of the ship. As lookout, my role was to scan the surrounding ocean and horizon for anything alarming that could affect the ship's current heading. For example, this includes any boats nearby or incoming weather patterns. I saw beautiful lightning flashes in the far distance that entertained me in the chilly breeze (with chilling being around 22°C) as I hoped that the large looming squall that was dead ahead would pass. 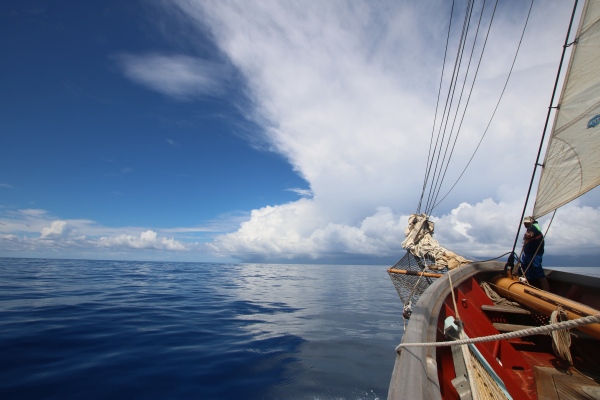 Unfortunately, this didn't happen! With just about 20 minutes remaining of our watch (we were so close to going to bed dry!!) the rain started pouring down as we entered into a storm that would eventually develop into a Force 7 squall! Luckily for A Watch (my watch group) we were able to head to bed after some more sail handling before B Watch took over the deck at a delayed watch turnover.

After catching up on some sleep in the morning, I soon began my second watch of the day from 1300-1900 (1:00pm-7:00 pm). The weather, thankfully, now was beautiful and clear as we proceeded to sail towards Silver Bank to hopefully encounter many, many whales!! During afternoon watch, we continued to practice steering the ship at the helm (one of my favorite things to do), setting and striking sails (which was becoming gradually less and less painful everyday as my numerous blisters from the first few days were finally healing), generally taking care of the deck, and participating in afternoon class. During afternoon class, my shipmates delivered a navigation, weather, and science report from the last 24 hours, Jeff (our Chief scientist) taught us about how the carousel is deployed, and everyone gave a 2 minute port stop debrief regarding what new evidence we had gathered for our change projects after having spent the past few days in Samaná, DR.

Soon enough, my afternoon watch was coming to an end, just as the sun was setting. During the shore component back in Woods Hole, our professors had explained to us the phenomenon known as the green flash. The green flash, we learned, would occur only under certain weather conditions, when no clouds could block the sun as it dipped below the horizon, resulting in a green flash of color. At around 1840 (6:40pm) the two watches who had just finished dinner gathered on the deck to join my watch to witness the sunset together. Amazingly enough, just as the sun exited our views, a green shimmer emerged- it was the green flash!!! After weeks of hoping to see the green flash, we finally had! I was so thankful to have been able to witness this marvel with my shipmates who were really starting to feel like family now.