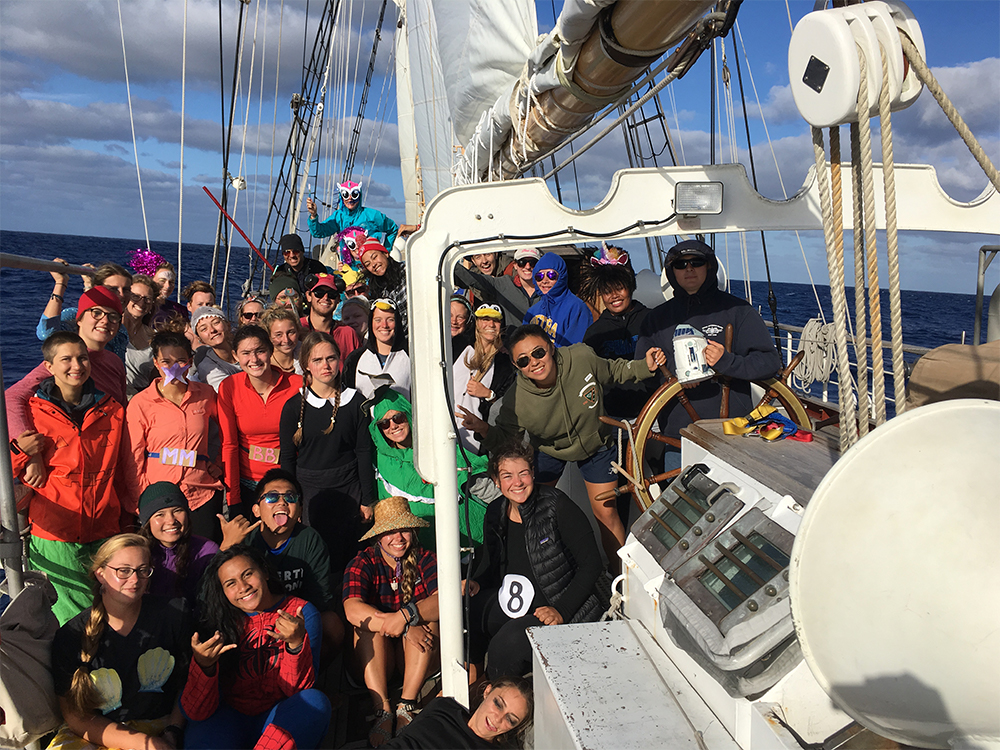 The crew and students, in costume in the late afternoon on the quarterdeck.

Wow! The crew really went all out today to create a haunted ship experience for us. Complete with leftover ground sausage, beets, and ketchup over the victim and villain in the galley, screams, spooky lights, someone floating in a harness suspended from the ceiling (wow Ava!), and a lot of other hidden surprises.

We started our story time around 7 o’clock on the science deck reading The Tell Tale Heart by Edgar Allan Poe and sharing unusual and unsettling stories from our home towns as it grew dark outside. Then our captain told us a story of how red over red lights sailing lights, back in the age of sailing meant the plague. Red over red: the Captain is Dead.  Never mind that now it means unable to navigate normally due to unusual circumstances (similar to the red-white-red we sail when we’re hove to for science deployments). I didn’t know that. But we were flying red lights tonight as we were hove to for Halloween festivities and the haunted ship below deck.

We started hearing the screams during our fourth story. Screams echoed out from the galley vent and other strange noises came from the dry lab. Slowly, a crew member would come up and take small groups of us down below through the decorated dry lab, the foc’sl, and the main salon.

What added to the mystique of the night was a real ship that came quite close to us right after sunset. If two red lights meant plague, did two white lights mean a ghost ship? The ship (which legit wasn’t answering its radio) approached within two nautical miles of us. Strange, since we hadn’t seen any ships since leaving Suva. Now, after traveling 903 miles from Fiji, on the night of Halloween, we all saw two white lights on the horizon growing larger and larger.

After crawling past a Ghost Ship warning sign in the colored LED lit dry lab and just passing before my classmates behind me got a jump scare out of the Foulies locker, I proceeded downstairs to additional impressive decorations. At the intersection of hallways, I found myself staring into the suspended, spooky cackling face our mate Ava.

In the main salon, we were met by a striking scene of people slumped over the tables in exposure suits (large full body suits meant to trap heat, provide floatation and sun protection in the case of an emergency), almost as if they were trying to abandon ship but were overtaken by the ghosts. A single yellow light flooded out of the entrance of the galley where we could see a horrifying scene of a villain standing over our screaming steward Sabrina (both in exemplary costume).

After everybody who wanted to had cycled through the haunted ship (the aft cabin was set aside and a movie was provided in case anybody didn’t want to participate), the crew brought out a basket of candy. There was a lot of laugher and impressed awe at the caliber of the decorations the crew had set up in the matter of an hour or two. The 600 foot “Ghost Ship” cargo vessel that had approached us in the night and that according to AIS was destined for Auckland, passed us (and eventually radioed), its lights fading into the night and the end of the excitement and costumes from today’s Halloween festivities followed, replaced by a deep satisfaction.

We’re now underway again and only a little more than five days out from Auckland. Crazy! We start our Junior Watch Officer roles tonight along with the last rotation of our watch officers. My two new watch officers are Ava and Farley – the suspended ghost and the villain in the galley. Oh dear! Perhaps it’s a good thing the students will be in charge of the ships daily navigation and science deployments from now on. We wouldn’t want to have any encounters with haunted ghost ships or uncharted ghostly lairs on the way to New Zealand