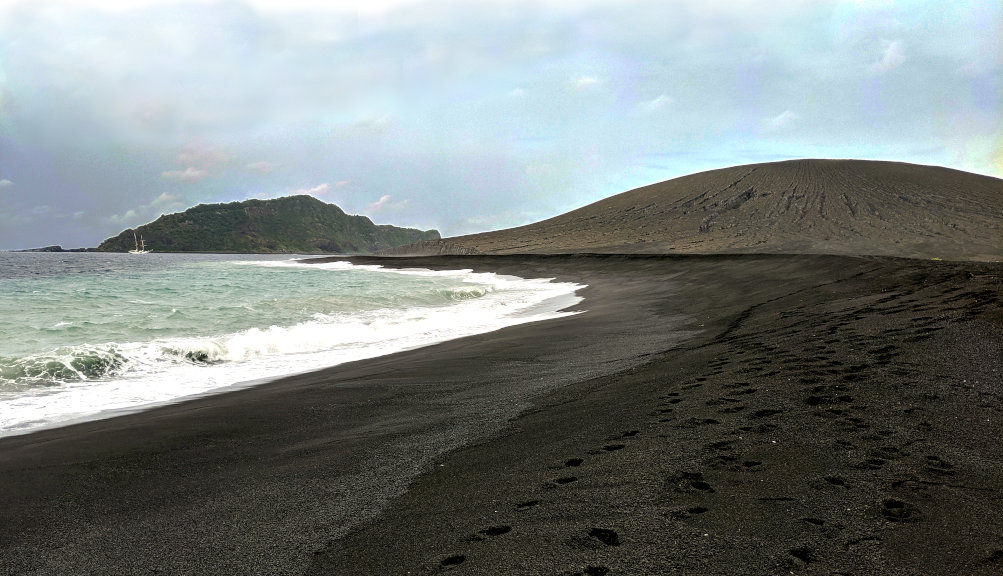 What a week! Having just finished an expedition to the earth's newest landmass, Hunga Tonga - Hunga Ha'apai (HTHH) in the Kingdom of Tonga a few days ago, I thought I'd write a few thoughts on this latest expedition to Earth's newest landmass. Shortly after the volcanic eruption that constructed this new island began in December 2014, we were alerted at NASA's Goddard Space Flight Center, and initiated collection of relevant satellite imagery. Closely following this over the next several months, we observed rapid erosion of the southern coast due to oceanic wave action, at one point breaching the crater wall and opening the crater lake to the sea. Based on observations to this point, we expected a relatively rapid and possibly complete disappearance of the new island, perhaps within months or at most a few years. But instead, the island has held on! 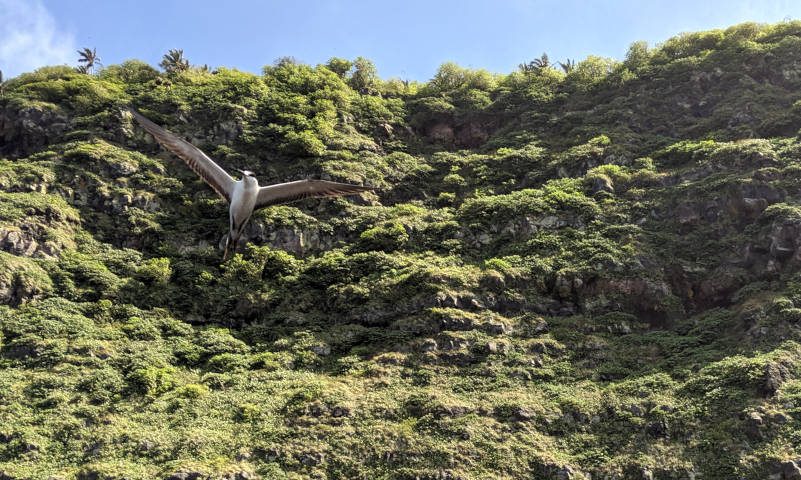 In mid-2018, with the island just over 3 1/2 years old, I was extremely fortunate to be invited to join a leg of the Sea Educational Association's SEA Semester/SPICE (Sustainability in Polynesian Island Cultures and Ecosystems) program cruise through the southwest Pacific that passes conveniently close to HTHH. That exploratory visit, one year ago, was extremely valuable to let us get our feet wet (figuratively and literally) in understanding the island system from the ground, instead of solely from a satellite vantage point hundreds of miles in space. We made many useful observations, collected some good data, and gained a more practical human-scale understanding of the topography of the place (such as that the adjacent pre-existing islands, and their rocky shorelines, are almost fortress-like in their inaccessibility). 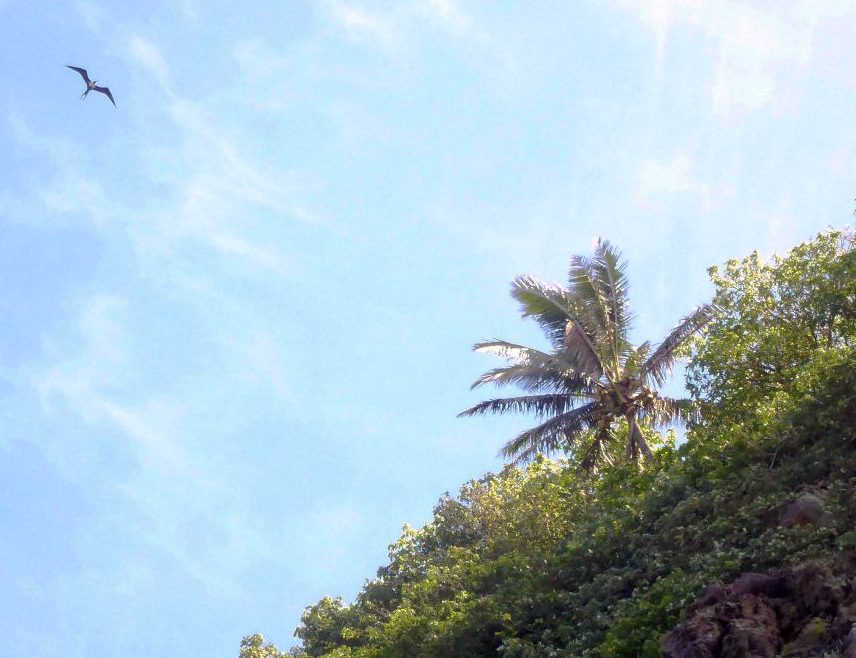 We also saw things not accessible from space, such as the hundreds of nesting sooty terns, and details of the emergent vegetation. My return this year was to extend and improve the observations we made last year, and to lay the groundwork for continued and new observations into the future. A significant advantage of traveling with SEA is the small army of 26 energetic undergraduates on board the ship, willing and able to help accomplish a wide variety of tasks we set for ourselves; without their help, much of what we accomplished would simply not have been feasible.

The core goal of these field expeditions is to improve our understanding of the island's brief evolutionary history and likely future. The island was formed by a surtseyan eruption, which is a relatively modest explosive eruption (compared to say, Mt St Helens or Mt Pinatubo) occurring in shallow waters. They are relatively common along the active Tonga trench (just over the past few days here, a smoke eruption has been reported further north in Tonga, sending plumes over 15,000 feet into the sky, and a magnitude 5.2 earthquake was reported to the east). 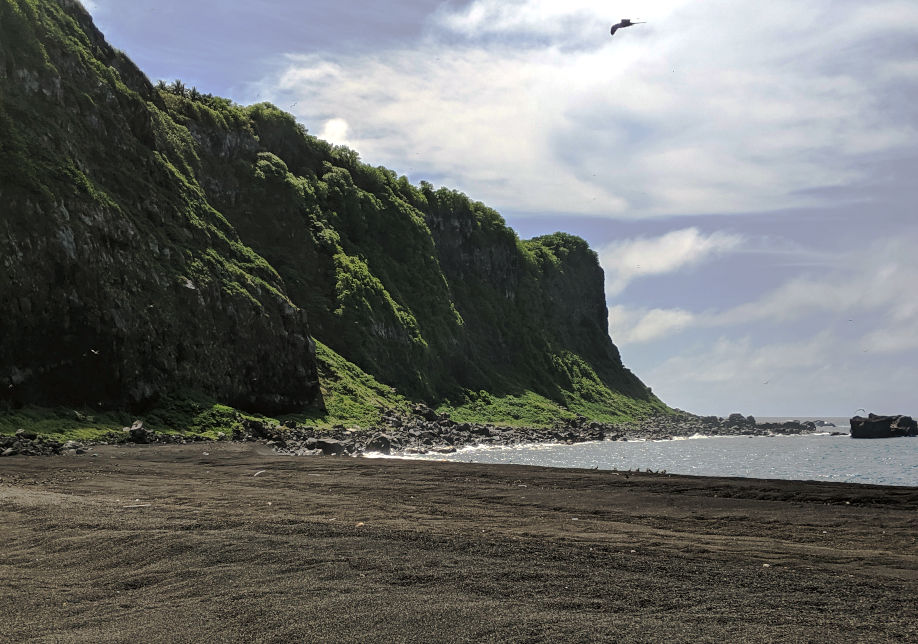 But it is less common for such eruptions to construct stable landmasses that survive for more than a few months. Over the past century, only two other surtseyan events have resulted in lasting edifices: Surtsey island in Iceland (erupted in the late 1960s; the type event), and Capelinhos on Faial in the Azores (mid/late 1950s). In Tonga, there are several examples of such eruptions forming short-lived islands over the past century, with the most recent erupting from the same submarine caldera as HTHH in 2009, only 1-2 km from the current cone; it washed away within half a year or so. The current cone may be persisting perhaps due to a larger volume of material ejected (giving it more time to stabilize before the oceanic wave action and pluvial erosion erode it away), or perhaps its position between the pre-existing islands has provided a level of protection against oceanic wave erosion.

In any case, the appearance of a new landmass (approximately 190 ha or 475 acres in size) has presented the unique and rare opportunity to study a rapidly evolving landscape from space, while observable change is occurring over relatively short periods of time (months to years). One key question to understanding its erosional past and future is to better estimate where erosion is occurring, at what rates, and to isolate pluvial-based gully erosion of the flanks from oceanic wave abrasion of sea-cliffs. Back home at the Goddard Space Flight Center in Maryland, we have been using high resolution stereo satellite imagery to provide one estimate of this, but the extreme relief (gullies and canyons with sheer walls up to 30m high) is difficult to accurately resolve with standard space-based stereo pair imagery. Thus, we deployed small commercial drones during our field visit to map the entire island at >10x the resolution of even the best commercial satellites. 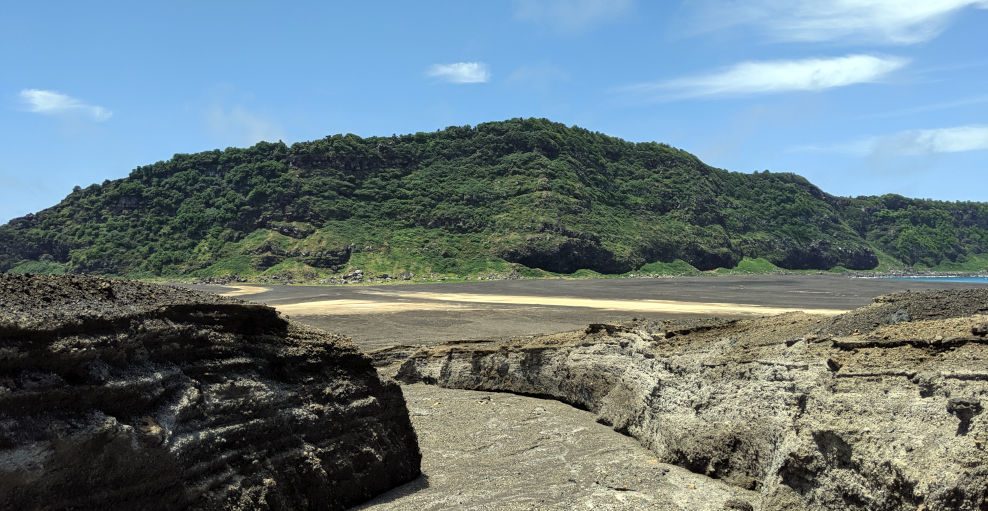 With more time and cooperative weather, we could have flown lower and achieved even finer resolution, but we did not want to risk flying the drone to a watery grave in questionable weather. The drone imagery will be processed using structure from motion (SfM) techniques that are better able to resolve the high relief topography than we can achieve with simple stereo pairs. We collected such imagery last year as well, so when processing and analysis is complete, we will have useful estimates for the quantity of erosion occurring in different regions, and from different processes (rainfall vs oceanic wave abrasion). As we also installed a precipitation gauge on this expedition, in the future we will be able to quantitatively model observed erosion as a function of rainfall amounts and rates.

The other key question about the island's future is whether a hydrochemical process termed palagonitization is, in the presence of heat and water, cementing the layers of ash into a much more durable substance, termed palagonite. If the core of the cone is slowly cooking into palagonite, it will be much more likely to resist erosional forces for many decades or longer. If this process is not occurring, then the observed erosional forces may reduce the island to little more than a shoal in a couple of decades. During our visits, we have collected small fragments of palagonite-looking minerals (lab analysis is needed to confirm), and areas exposed along the southern cliffs (where the rate of oceanic wave erosion is significant) visibly resemble exposed palagonitized zones on Capelinhos and Surtsey. A key finding from this expedition included areas of substantial subsurface heat, detected along the shore of the crater lake at depths from the surface to less than a meter. We had hoped to find cracks venting hot gases in places, and brought along an infrared camera to help detect such, but in the end, a student literally stumbled across this sub-surface heat. While handling a small raft (deployed for sonar analysis of the crater lake bottom), her legs plunged through the soft sediment at the edge of the lake to a depth of a few feet, and found unusually warm pockets. We confirmed temperatures of 100-130F in several zones around the lake, simply by pulling up the sediment by hand. In any case, this suggests residual heat is circulating near the surface, and therefore may well be doing so within the core of the cone, establishing a critical condition for the formation of palagonite.

Along with helping to answer these key questions, our visit facilitated exploration of other important facets of the island's evolution, including: bathymetric surveys of the crater lake and coastal shallows; surveys of the flora and fauna; and surveys of and collection of accumulated garbage.

One change that I found particularly striking from one year ago was the development of the vegetation establishing itself on the new land. In 2018, there were three primary patches of vegetation: two in depositional areas to the NW and SW of the cone (near the pre-existing Hunga Ha'apai island), and one on the western flank of the cone itself. Last year, the NW patch was heavily dominated by near mono-culture of beach morning glory, but this year was host to a much more diverse assemblage of plants (including morning glory, but no longer dominated by it). Conversely, the patch on the western flank of the cone appeared less diverse than last year. However, last year it hosted a boisterous colony of nesting sooty terns, while this year there were no birds present.

Which highlights another major change - in the distribution of birdlife on the island system. Last year we found nesting sooty terns in two large aggregations numbering likely 1000 birds or more in total in the center and west of the system. This year, however, those areas were entirely unused by the terns, while a smaller nesting colony was found far to the east, abutting the pre-existing Hunga Tonga edifice. We also observed rats, and owls, and thus suspect there may be more complex ecological interactions at play here (the terns nest on the ground). However, other bird species were more prevalent, including species not seen last year such as red-footed boobies, tropicbirds, and a good number of petrels and shearwaters. We also saw a much larger number of frigate birds (both 'lesser' and 'greater' species), than the few observed last year. Although we had a dedicated observer to survey birds (and plants) which helped substantially with bird identification (and relieved the pressure to do this myself, personally imposed as an amateur birder), it was still obvious to me that more species, and more individuals of more species (except the sooty terns), were present this year.

The bird life was particularly active around Hunga Tonga, which appears cut from an exotic island adventure film: mostly sheer cliffs rise up to over 400 feet, facing the black volcanic cone (which you could readily imagine emitting a column of smoke), and draped in thick tropical greenery. At Hunga Tonga's flat top, which appears entirely inaccessible without climbing gear, tropical trees and palms sway in the wind, while scores of brown boobies, noddys, frigatebirds, and tropicbirds soar and call. With the overhead avian cacophony providing the soundtrack, the scene of a lost tropical paradise juxtaposed against the new, somber and foreboding cone of the crater suggests a primeval landscape from a different age.