The Sights and Sounds of the Waitangi Treaty Grounds 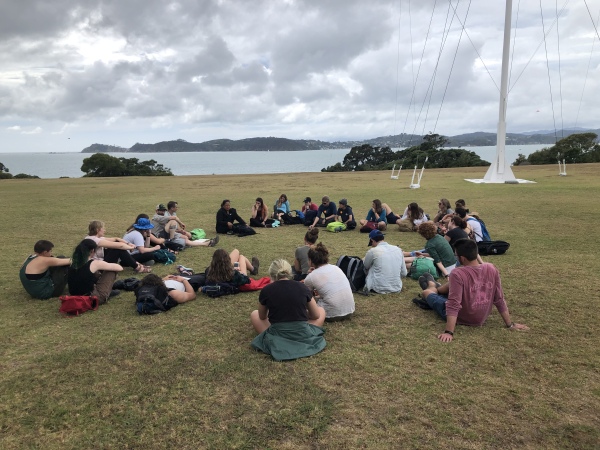 Gathering to speak with our tour guide and reflect on the day near where the signing took place. 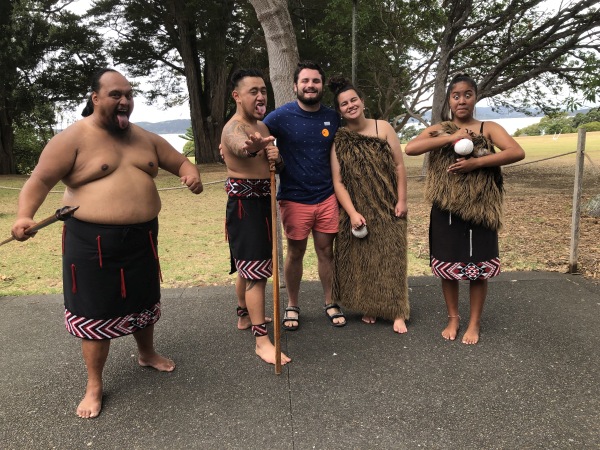 Greetings from the Bay of Islands! My name is Tom Rubino, and I am a junior at Carleton College. We have been at anchor in Kororāreka Russell Harbor since Friday at our first port stop. Consequently, this also marks the first time in 72 hours we have walked on a surface that doesn't sway. More than once, I have had to remind myself not to anticipate and brace myself for a swell!

Likened to United States' Washington D.C. or Philadelphia, PA, this area was where, arguably, Aotearoa New Zealand's most important historical event occurred, the ratification of the document that would lead to "the birth" of modern Aotearoa New Zealand. This document, named the Treaty of Waitangi, was signed in 1840, and declared, depending on the English or hastily crafted Māori translation, either full sovereignty of all lands to England and the Queen or merely governorship by England, assuring that all iwi (tribes) remain in charge of their people and all their rightful lands. Therefore, the benefit of the treaty is an interesting topic of debate in New Zealand.

Given that Waitangi Day (February 6th), a formal holiday annually celebrated in New Zealand since the 1970s, happened while we were on shore, this event was heavily discussed in our Maritime History and Culture class. This meant we had a much deeper appreciation for what happened here when we finally arrived.

Today, we took a rainy (thankfully short) ferry ride across Russell Harbor to Pahia, where we "powerwalked" 30 minutes to the Waitangi Treaty grounds. There, we were greeted by a tour guide who showed us around the grounds, giving us background from a Māori perspective of what happened over 150 years ago. Some of the highlights of the tour were an 800-year-old Kauri tree stump, the largest war waka (canoe) -at over 100 feet long- in existence, the newly erected Māori war memorial, and James Busby's house, the 4th oldest in all of New Zealand.

Next, we were greeted by a group of Māori performers. They welcomed us to participate in a cultural performance at the national Māori marae (gathering place), where we were offered song, dance, and a look at the practices Māori use to display hospitality to visitors. At first, I was unsure how to accept this welcoming. I wanted to remain respectful at all times. However, they were incredibly inviting and humorous, which quelled my worries. It was an honor to experience this from them directly, and I still get goose bumps thinking about how beautiful some of their voices were. Afterwards, the group welcomed a question period and allowed us to take pictures with them!

Our tour guide was kind enough to spend her free time with us to field more questions regarding Māori customs and the Waitangi Treaty from a Māori viewpoint. In picturesque fashion, we formed a circle under the flagpole displaying the British flag and original New Zealand Māori flag on bottom, and the current New Zealand flag on top, signifying the unification of the two groups to form one nation. This conversation turned out being incredibly insightful, and we were lucky to have a tour guide who was willing to go the extra mile (or kilometer) for us!

We finished the formal part of our tour by learning about and eating a Māori meal prepared in traditional fashion, a hangi. It consisted of kumara (sweet potato), chicken, pork, lamb, stuffing, and salad. It was delicious and made even sweeter when we were offered seconds and thirds!

Before we left the Treaty Grounds, we toured the official museum and saw the first facsimile of the Waitangi Treaty (the original was water damaged and mostly destroyed by rats). A couple of us thought the most fascinating part was comparing side-by-side the English version and the English translation of the Māori version of the treaty text and discussing some of the discrepancies/slight differences between the two.

Finally, we were free to go explore Pahia and Russell for a good part of the rest of the day. Overall, this excursion has been a personal highlight of the trip so far. Because of how deeply we studied this topic, I felt prepared to ask more questions and found myself generally more interested in the experience of being there and receiving more from this opportunity. SEA is the definition of "place-based learning," and I can see how much more actively engaged I am in the process of learning and gaining new experiences when I am actually here to witness them!