The Sounds of the Corwith Cramer 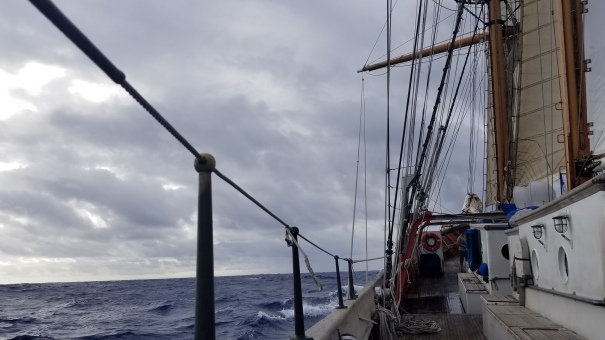 The Corwith Cramer during a sporty day. Sounds on this day: louder outside voices to be heard over the wind, water splashing on the hull, squeaky salty shoes on the deck.

Sail Plan
Sailing under the two staysl’s and a single reefed mains’l.

This was an idea given to me late last night while on watch, around 0010, by Betsy, a fellow C-watcher that will be greatly missed upon her departure in Bermuda!

There are many sounds on the Corwith Cramer, so many, that when I first got on board it was overwhelming, but in less than 24 hours they were all familiar and - comforting.

During boat checks, every hour, every space, every time, one gets incredibly familiar with the sounds and the smells of the boat, to ensure that nothing is amiss. And my bunk, is right in the corner of the main saloon (people could lean their backs into my bunk during meals if they wanted), so I really am in the middle of the action.

I'll just list a few - because I have a running list of these sounds in my journal that I think could fill a short novel. It sounds like water slapping on the side of the boat while I lay in my bunk. Or, the loud click-click-click of the chirp that mimics someone clicking their tongue against the roof of their mouth - but amplified to max volume. Or, the sounds of the heat blocks in the lab, beeping when they are "testing" or "not ok." And the low hum of the generator, and the loud whir of the engine that lulls the entire boat to sleep.

There's also the loud squeaking sound heard below deck, every day, twice a day, around 0950 and 2200, of the CTD getting pushed across the wet deck above. Then there is the meal chime, a triangle that is rung 3X a day for both first and second seating of each meal - probably one of the favorite sounds aboard. Though alarm clocks are not present, every six hours, you can hear someone on watch waking up everyone on the next watch, by saying their name, over and over, until they stir.

There is also the ever-present sound of call and response: "Hands to set the Jib!" said by one person. "Hands to set the Jib!" said by everyone in proximity. And there is the sound of hushed voices in the saloon, talking about star lines, herbal remedies, or favorite books on board. While there is also the sound of loud voices in the saloon when a meal comes out, someone makes a witty joke, or during field day. On field day - many of the sounds are the same, but there is also a new one that is only heard once a week, music. Music is one of the sounds I miss the most, and in turn, one of the things that makes field day so thrilling.

But, I think my favorite sound is being up on the bowsprit - dead ahead of the boat so you cannot hear any of the commotion onboard, just the waves crashing around the Cramer's bow as she rocks up in down in the ocean's swell.

As silly as it sounds, the SOUNDS of the Corwith Cramer all make sense and all are comforting in their own way (as long as everything is running smoothly). And I really wonder how bizarre it is going to feel to be in a totally quiet space again - I imagine it'll feel like something is missing.

(hello family!! and pals, Talia, Mecky, Julie, and Noah - I love and miss you! I will see you soon and can't wait to hear about your adventures.)