The Sun Is Still Up There! 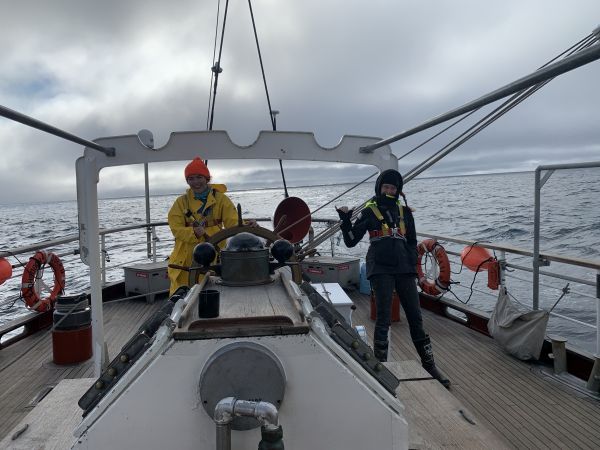 Becca and Calliope on the quarterdeck with the first glimpse of the sun and blue sky!

After a few days of total cloud cover, the sun (and moon!) finally made an appearance during morning watch. During my two and a half hours at the helm, the clouds parted and we got to see some patches of blue sky and stunning lines of silver where the sun illuminated the water on the horizon. Everyone was so excited to see something other than clouds that members of other watches came up from below to bask in the temporary sunshine (as the day progressed, we cycled through warmth to cold winds to light rain—I’m glad I wore my foulies). I got to be at the helm as we hove to for a science deployment, and from my station I got to see a sea lion playing off the starboard side of the boat! We’ve been able to see so much cool wildlife so far—mola molas, fin whales, dolphins, bioluminescent plankton, petrels, and shearwaters—and I’m really looking forward to all that we’ll see as we head into the gyre.

After being relieved from the helm, I spent some time with Cap (Rick) and Calliope (my watch’s mate) learning about the ship’s technology in the doghouse (where the maps, logbooks, radar screens, radios, etc., live), and got to send our weather observations to NOAA! I write this as I get ready for my midday nap— I stayed up late with my watch last night (“late” being about 2200 preceding a 0600 wake-up for watch the next morning!) eating amazing chocolate cookies made by Cookie, the ship’s steward, and playing a card game in the main salon. I’m so excited that we’re starting to make a home on the Seamans. My bunk is in the fo’c’sle, all the way forward in the ship, which means I get a front row seat to all the waves that we sail over. It gets loud up there (the big waves sound like bombs going off), but it’s incredible to be able to feel in my body the motion of the ship with each swell. All is well out here at sea!