There and Back Again, a Deckhand’s Holiday 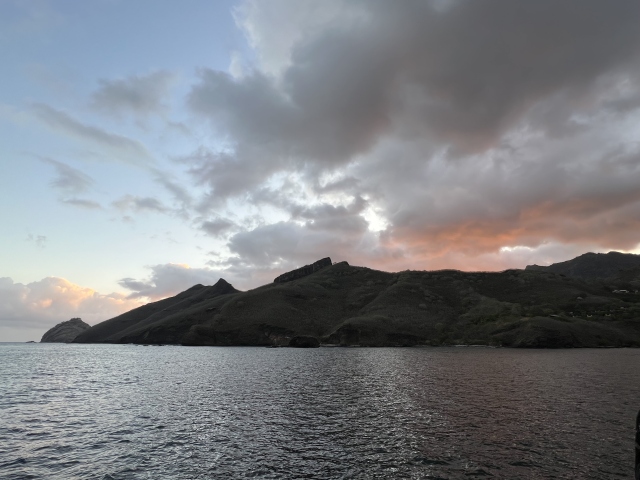 One wonderful thing about ship life is books and the chance to read. I only brought one book of my own that I have not yet opened. There are many great books in the ship’s library and my shipmates have brought along many as well and they pass them out to people who want to read them.

Three books have been lent to me and they were books that I otherwise never would have read. Anyways, one morning I wake up and there sitting beside my bunk is a copy of The Hobbit that my friend and shipmate lent to me. I haven’t read it for years and I am happy to be reading it again. I am about half through as I write this. 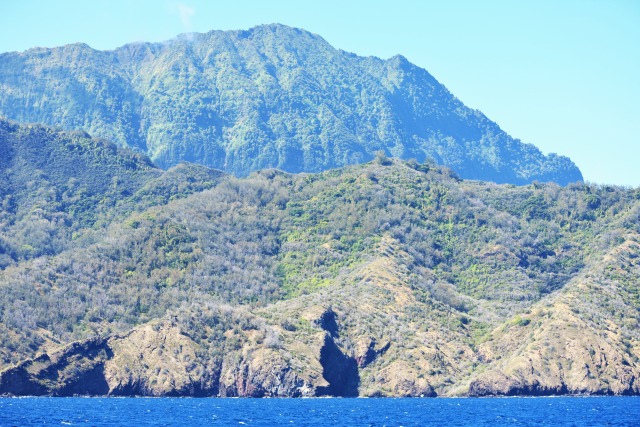 Today we sailed by an island called Kiva-Oa and seeing the rocky cliffs made me think of the mountains Whiteface, Passaconaway, Paugus, and Chocorua back at my home, stark and angular in the winter from the fire tower by my house on the East Coast of America in New Hampshire, so far from where we are now.

Being at sea with only the ocean all around feels sort of like I hadn’t left, but seeing these craggy islands appear out of the blue (pun intended) in the middle of the Pacific Ocean really made me realize how far we have come. The island that we anchored at is called Nuku Hiva and we put anchor down in the bay which is surrounded by the cliffs of the island.

The islands were first visible at sunrise this morning and they look as if they are straight out of Middle Earth. It was really an amazing sight that reminds one of the wonder of seeing new things and the magic of the world around us.

Now, I would like to draw the reader’s attention back to the title of this blog post. ⌠There and Back Again, A Deckhand’s Holiday.

This is a loving homage to There and Back Again, A Hobbits holiday, the book that Bilbo writes of his adventures. Today, as I sat on the house top on the deck and stared at the islands as we sailed by them, it occurred to me that this journey that we, as a ships company, are on has similarities with J.R.R. Tolkien’s The Hobbit. This trip also has things in common with the Lord of The Rings trilogy. So, I will draw from both in the analogies that follow. (Disclaimer: Certain plot points of The Hobbit and Lord of the Rings will be relived in the following post).

Our trip began in Woods Hole Massachusetts, a Hobbit hole of sorts. To be fair it is not Bags End but it shares characteristics with a Hobbit’s home, such as being a very comfortable place with lots of good food and places to eat, such as Pie in the Sky, Coffee Obsession, Seafood Sam’s, and many other fine dining establishments. 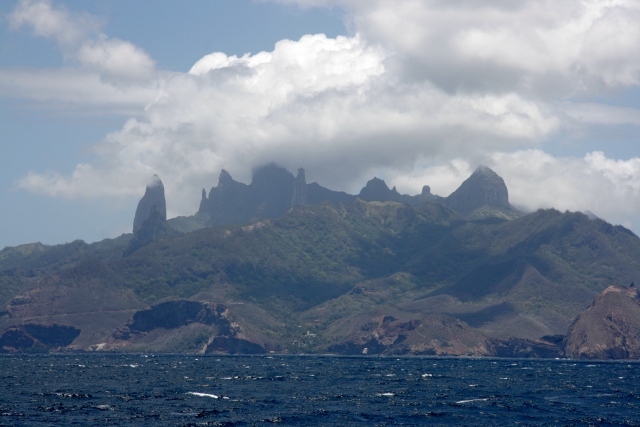 The line that we use to deploy science equipment over the side of the ship is made of a material called Dynema which I have been informed is stronger than steel. This is very similar to the Elvish rope that is described in The Two Towers (the second book of the trilogy), that is extremely light but highly durable. Samwise and Mr. Frodo were gifted this by the elves and use it as a leash for Gollum. We have not yet tied anyone up with it you will be relieved to hear. But we do have a Gollum Halloween mask on board, so stay tuned.

Frodo gets injured during his journey. He gets stabbed in the shoulder with a dark blade. Like Frodo, I too got a small injury (nothing to be concerned about though) I got stung by a jellyfish on a swim call. The sting was on my upper arm by my shoulder and I had a pretty cool mark to show for it but it is fading nicely and will not require Elf magic to heal.

Just as with Bilbo’s party where there is always a lookout posted when the group is sleeping we also always have a group of people on watch and a lookout stationed at the bow keeping an eye out for Orcs and other nasties that may appear from the waters beneath us.

People on board also bring to mind some of the characters that we all know and love, the most notable of which are the two engineers who make one think of Merry and Pippin. One morning, I went into the galley to find them sneaking a Tupperware full of salami out of the fridge. As he ate, Pippin talked of the similarities between the salami and the Elvish hard tack wafers (of which half a cracker could feed a full grown man. In the books, it was Pippin who ate three of these wafers at one point much to Frodo’s chagrin. I had to chuckle at that.

We here aboard the Robert C. Seamans are very food oriented. We partake in breakfast, morning snack, lunch, second snack, dinner, and a midnight snack. There are also, always munchies available for snacking such as ramen, sun butter, crackers, oatmeal, hot chocolate, and of course, tea and coffee. The Hobbits are fond of their meals as well, with breakfast, second breakfast, elevensies, teatime, supper and dinner. One morning I was on deck and I was enjoying a second breakfast of instant oatmeal (or instant porridge as a Hobbit would call it) and I mentioned this to the two people beside me in relation to the Lord of the Rings and as they both happened to be nerds (like me) they began talking about elevensies and tea time and supper and dinner and this gave me the idea for the post you are reading now.

Middle Earth is where the Hobbit’s journey takes place and I would like for you to consider for a moment that we are not very far from there at all. In fact, we were at the middle of the earth only a few days ago as we crossed the equator.

If I were in the Lord of The Rings I would probably be a Hobbit. Once, a few years back I fancied myself an Elf but I was both lovingly and accurately corrected by my brother. He reminded me that I am much too clumsy to be an Elf but I am the perfect amount of clumsy for a Hobbit and I must say that I agree with him.

After several weeks underway the watch groups are close and we have created little communities full of camaraderie and trust just as Bilbo did with the dwarves.

Our captain is called Kevo, which phonetically sounds like Frodo. Coincidentally, he is leading us all to Tahiti which is a volcano, just as Frodo led the fellowship to the volcano of Mordor.

I have a trusty knife. It is a Benchmade mini griptillian (all rights reserved) that I have had for almost eight years now and it is still going strong. It is similar to Sting, Bilbo’s Elvish made dagger. I haven’t noticed the blade glowing blue when goblins are near, so I guess that means that we can rest easy because there are not goblins on board.

The bioluminescence in the water that is visible as night could be misconstrued for Elvish magic that glows when Orcs are near. Another good reason for the lookout to keep a weather eye out for dangers in the water.

So far, I haven’t gotten wind of any all-powerful rings on board but I will keep an eye out for any crew members that begin to refer to themselves as ⌠my precious.■ We passed an island called Ua-Pou and it had rocky spurs jutting out of the tops of the cliffs, it really looked like one of the misty mountains or perhaps Mt. Doom. It was a sight to see these jagged rocks rising from the top ridge of the mountains. On the three islands that I have mentioned there have been small villages nestled into the dells between the cliffs, and they look just as I imagine the Dwarfish village of Dale nestled in the Misty Mountains to look.

Just as Gimli the Dwarf came to sense the ancestors of the Dwarves deep in the mines of Moria and how Aragorn accepted his role as a descendant of the ancient kings of old we too have been traveling into the past in a manner of speaking.

For the past 28 days (give or take a day) we have been on the ocean sailing on a brigantine using the maneuvers and calls and techniques that have been in use on the high seas for hundreds of years. We also have been sailing through waters that past sailors have traveled through for purposes such as whaling, exploration, and trade.

With nothing but water surrounding the ship, the world looks the same now as it did then with no fiber optic cables visible, no internet, and no motor boats (not including our motor which admittedly is used on occasion). What especially awes me is that we sailed through the doldrums and the equator, and this lends a feeling of connection and appreciation for all of the ships that have sailed here before, including, the Bounty, and the Essex and many others. It is really something to do what those sailors did and see what those sailors saw with only a distance of a few hundred years of separation.
As in Bilbo’s story, we are traveling far to get to an unfamiliar and faraway place but we will be back where we started soon enough with the help of flight, in our case, by the use of airplanes, and airports, and little bags of almonds. But in Bilbo and the Dwarves’ case I refer to the giant eagles that bring them back from the lone mountain. The journey to our destination, Tahiti, is a long one and some say that the journey is the destination (which it certainly is in our case) but whether or not Bilbo would agree with that sentiment remains in question.

At various points in the story, Bilbo thinks of his Hobbit hole and longs for a warm fire, and a hot cup of tea. Many of us also think of home often and of the people that follow along with our journey. The great thing is that we will see you all again soon as this is a story of going there and back again. And soon I will be looking at the mountains I grew up by and thinking of these mountains so far away.
Thank you for reading! This has been another segment of musings from Maggie.

Fair winds,
P.S. Hello family and friends, thanks for reading! Say hi to Tim for me ?
Maggie Grant, B Watch, Deckhand