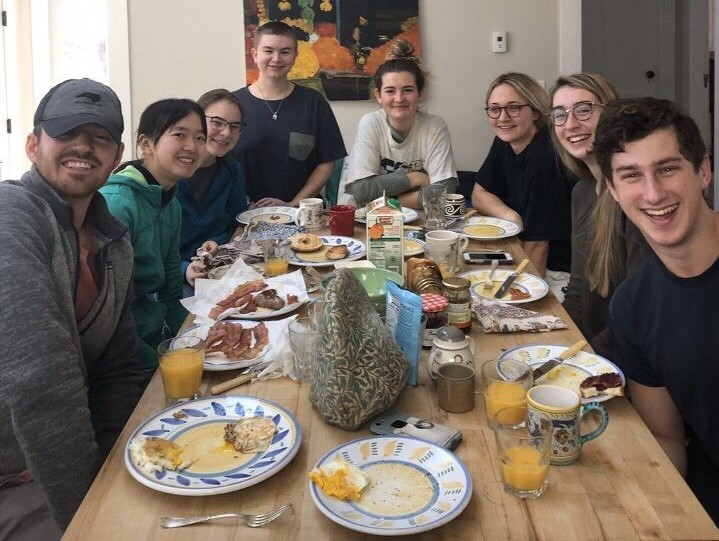 Students of S-290 enjoying a meal together, in-between difficult conversations about climate change.

As I’m writing this, we are halfway through our fourth theme week, on climate change, having just discussed ocean pollution last week. With every class we face a different, grim reality. In conservation and management, we learned that regulations are glacially slow to be approved compared to the pace and scale of pollution in the world. In Ocean and Global Change, we learned from one of the leading microplastics scientists out there, SEA research professor, Kara Lavender Law, that humans are ingesting microplastics and it’s coming out in our stool.

One of our most interesting, if somewhat horrifying conversations was when we talked about the Deepwater Horizon oil spill. The long term impacts of huge spills like that on fisheries and ecosystems are still being monitored, and there isn’t a large body of work on their effects, which is scary in itself. However, the scientists who calculated how many barrels the breached Macondo well was releasing every day were nearly silenced by British Petroleum, only to have their estimate knocked down in the courts by BP’s ferocious and well-paid team of lawyers. And besides those scientists, whose organization covered their legal bills, there are many other scientists who couldn’t afford facing down a massive team of corporate lawyers, so their data was disputed for essentially no reason other than corporate greed. The accident itself seemed to be caused by greed, at least according to the Hollywood movie: they were at least 40 days behind schedule and the “negative pressure tests” that the crew runs to check for the stability of the well, despite coming back ambiguous, were trusted anyway: to satisfy the executives on the rig.

Thinking about these issues, day in and day out, in the midst of a gloomy New England winter, are enough to drive a bunch of environmentally-conscious students into a depressive state. Every time we leave a movie on some environmental topic, the house I live in is silent for at least a couple hours, and if we’re not silent, we’re discussing the injustice of it all. How can people continue to fin sharks? Why does everything have to be made of plastics? Why couldn’t those BP executives have just paid a little more money and gone a little more off schedule to protect a priceless marine area?

Invariably, this conversation leads to thinking about my own culpability for the situation our planet is in: I never take a reusable thermos to coffee shops, instead using paper or plastic cups; I drive my family’s pickup truck in and around Wood’s Hole; I fly to and from my home school in Minnesota at least twice in a year; and I’m flying to and from New Zealand for this program. My emissions can go on from there, and the amount of plastic I use in my daily life is absurd. We truly live in a synthetic, plastic world. The issue’s scope is so far beyond single use plastic straws, which have blown up on social media over the past year. It’s in our clothes, our notebooks, our lungs, and our poop.

But what I’ve also learned over the past couple weeks is that my voice has incredible power. The corporate world is ultimately a democracy: if I stop buying as many things with plastic packaging, buy more local food, and increase my awareness of these issues, I have the ability to put pressure, even a miniscule amount, on a company that produces pollution and polluting products. Beyond my own habits, I can tell my friends and my family to change their habits. The human social network can take it from there, spreading the word far and wide; movements have been founded on less.

We’ve talked about using optimism as a tactic for science and conservation in our Conservation and Management Class. The world seems to know that we are facing a threat against our existence, created by ourselves, and that if we lose hope, we lose all progress and momentum that has brought us to this point in our policies and science. So I’m writing here to say this: we all need to keep thinking, talking, and voting. We won’t make any progress to save ourselves if we don’t believe we can do it. I believe, somewhat timidly, that we can save our earth.