To Nane and the Tongan Way 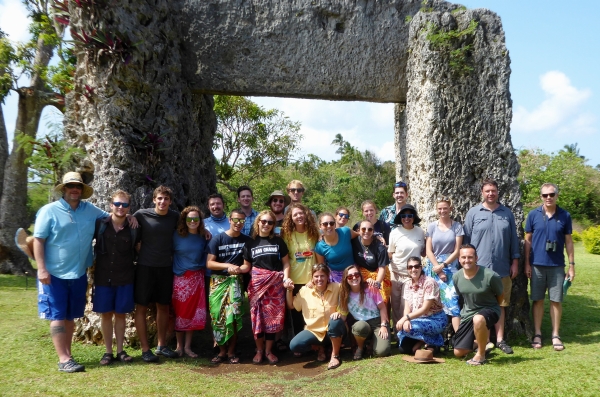 In front of Ha'amonga a Maui ("Maui's Burden").

O.K. we just departed the dock by the palace in under 20 minutes to make way for an emergency aboard an incoming cruise ship that needed our parking space. Captain says we done good. No makings for an Allstate mayhem commercial here, no sir.

Earlier today...after a morning at the local market, we left the "magic sailing school bus" we call home, presently, and ventured forth with swimwear in hand on an actual bus that took us to the langi, or cemetery. The most colorful places in Tonga are the langi as they are covered in flowers. My first glance at the 16th Century royal tombs was one of intrigue because I could not wrap my head around burying loved ones in sand, let alone the royal family. However, Nane, our guide, explained to me that Tongans view the body as sacred and that they want to safeguard its sense of place with little elemental contact so that the person can meet the afterlife with their full sense of self. Our next stop brought us to the Ha'amonga a Maui, a 14th Century limestone monument. Built by the 11th Tu'i Tonga, or king, to symbolically end his sons' feud, it weighs at least 55 tons and was hauled by Tongans up a ramp from the ocean to designate the political center of Polynesia. Much like Stonehenge in appearance, this monument has unconfirmed astrological significance as well. If this is how they play Jenga, I'm game. It is depicted in Captain Cook's visit to Tonga with men holding a wooden beam on the backs of their necks to symbolize how the top stone of Ha'amonga a Maui connects them in the spirit of brotherly love. This spirit is still found in Tonga today in communities of loving, generous, and Godly people. In the background of Ha'amonga a Maui there is another limestone monument. The Esi Maka Fa'akinanga ("Stone to Lean Against") was also erected by the 11th Tu'i Tonga as a protective barrier for him during battles. There was no Kevin Spacey in Phone Booth to hide from, but think of the weaponry of the time and how he would have to lay himself almost inside of this massive rock.

As the bus took us to our last stop, Nane told us about herself, her husband, and her son. She spoke about the importance of her family and how they stick together in tough times. Here, that means tropical cyclones and rebuilding one's life from the ground up. Moving from the ground down, we then entered Anahulu Cave, which was guarded by two rather large, bright yellow and black, banana spiders. Their abdomens alone were roughly the size of a Pinnacle golf ball. While there are flying foxes in Tonga, there were no bats in this cave unless you count the swifts and their bat-like chirps. After ducking a few yards, the cave opened up into this large subterranean bunker full of stalactites and stairs that had been carved out into the rock. Filled with fresh water, we jumped off the ledge into the bottomless pool and swam in the dim, artificial light. I felt like I was in a Gustave Doré drawing for a second, but the warm laughter of my shipmates soon lifted the dark back to light.

There is tremendous positivity in this place, Tonga. Everyone says hello with a smile and is prepared to give you the shirt off their back. It is an unfamiliar way of life for me, having been raised the New York Way, but it forces me to lower my walls and embrace the love of the Tongans. Nane told us she loved us when we got back to the ship. She sang a soul-touching song in her language to a bus of relative strangers and told us she loved us after her gracious and inclusive tour this afternoon. I gave her a big hug, Mom-raised smile, and reciprocated the sentiment. This is the Tongan Way. To the rest of the world, hug somebody. Thank you, Nane.

Remembering Gramps today and always, 10/11/2008. Love to my family and friends back home in New York, Colorado, and the rest of the world. Until we see each other again, I hope your lives are as much fulfilled right now as my own!