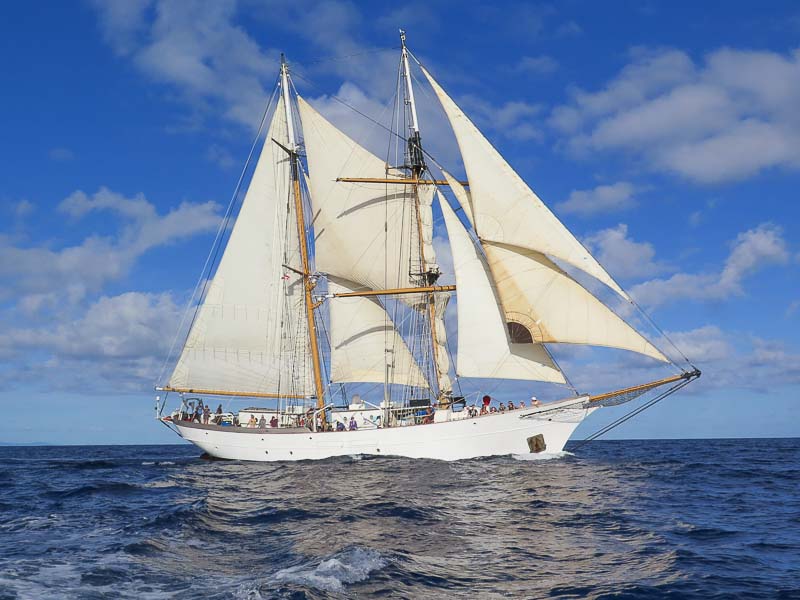 We started our three-day journey yesterday, so we have complete rotations between watches which have been messing with everyone's sleep schedules. For me (Jake), I had dawn watch at 0100 today until 0700. During the beginning of the watch from about 0130 to 0330 the others and I on deck and in the lab at the time worked on a scientific report for some of the data we had been collecting, and it took a while but we finished it. After we worked with the report, we had a quick break and tapped onto deck duty. I ended up steering the ship from the helm from about 0400 to 0600, where I was promptly relieved of helm and placed on lookout for the rest of watch.

Lookout was uneventful, and everything was as you would expect it to be in the middle of the ocean. Lots of water, the occasional wave, and sometimes you even got to experience the pleasure of seeing a bird. Sadly, not much of anything actually happened. Also the weather for the dawn watch was completely cloudy so we didn't even get to see that many stars.

Besides the watch today, we've been doing lots of cool deployments on the scientific side of things. For example, we've been doing four deployments at each scientific stop. We deployed a Neuston tow, a phytoplankton net, the carousel, and a meter tow. The neuston tow is something that basically skims the surface and collects lots of cool stuff. The phytoplankton net is a smaller net that we deploy while not moving to collect a vertical sample of the phytoplankton in the water column. The carousel is a bunch of funky tubes that start open and close at different depths in the water so we can sample the water at different depths and gain a lot of knowledge of some stuff such as salinity, temperature, and pressure. Finally, the meter tow is in my opinion the coolest one. We take a huge net and drag it behind us at a depth of about 70 meters deep. After about 15 minutes, we begin to pull it back in and can grab a bunch of deeper water biological samples. We ended up getting lots of cool stuff out of the meter tows, which included lots of small Medusa jellyfish, some of which were still alive.

It's about 1600 at the time of me writing this, so I don't have much about the end of the day, but it's been a long day for a lot of people and we still have 2 days left of nonstop sailing. I personally am slowly beginning to adjust to the six-hour watch schedule, but I can't really speak for the others.

PS: Hey madre and padre it's really cool on the ocean we should move to Vermont/Maine

PS: Hi Mom, Dad, Nico, and fluffers! I'm having an amazing time! I wish you were here with me, and I can't wait to tell you all about the sea component.