Too many things to look at 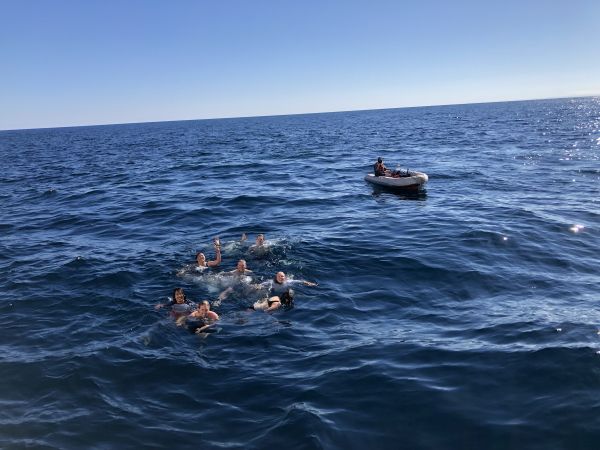 Now that we have come back into the California Current and gone past multiple marine sanctuaries, I find it very hard not to spend as much time as I can on deck. The immense amount of life in the California Current is a stark contrast to that of the gyre and the days of seeing only a few birds in one full watch are far behind us. Even though we have left the immense amount of birds and other life in the marine protected areas along the coast, so we can dump our food waste and sewage, there is still tons of life. 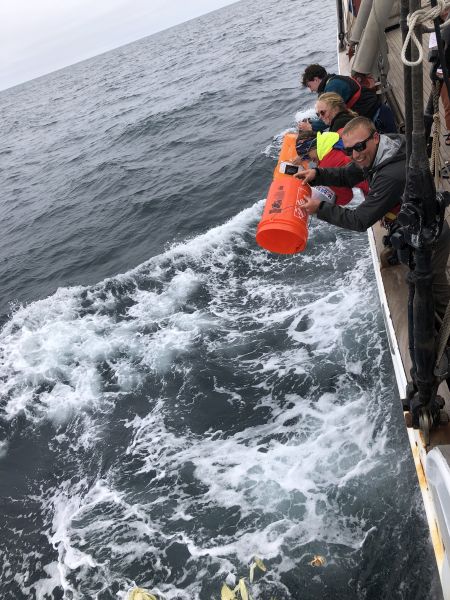 Kyla, Sarah, Ian and I, delighted after dumping four old food waste buckets into the ocean at the same time.

My day started out by being woken up by Christina at about 1:40 this morning to come see the full sky of stars that had decided to show themselves. While getting dressed, I had a few minutes where I thought I had slept through my wakeup for dawn watch and had to be woken up again, so I was a little panicky until I fully understood that I only had to go up on deck and enjoy the stars. When I stepped onto the deck I found that the sky had almost fully opened up, showing off multitudes of stars and even bits and pieces of the Milky Way. Most students were on deck enjoying the stars, despite the chilly air, which I combated by bringing my sleeping bag and pillow onto the deck so I could lay and watch the stars. After about 30-45 minutes the clouds returned so I dragged my bed back to my bunk and went back to sleep.

I then awoke the next morning extremely tired, but still excited to stand watch to see what the ocean would show us today. Of course the California Current lives up to its expectations and during watch turn over we saw a couple whale spouts off in the distance. The water was extremely calm and glassy, reminding me more of a small lake than the vast Pacific Ocean. The sun was also out most of the day, resulting in a very pleasant morning watch. Throughout the watch I saw many gelatinous organisms float by, three baby sharks swimming around under some floating kelp, multiple sea lions floundering on the surface, an albatross, and the one that is under the most debate: Orca Whales.

While hove-to (stopped) for a science deployment, Becca and I saw a strange, black, and tall fin shape appear way off on the horizon. After seeing it appear and disappear a few times, I grabbed some binoculars and tried to find the spot that it would reappear. Sure enough I watched the shape leave the water, reach a tall height, joined with some much smaller ones, and return back into the water. They would leave the water much like whales do when coming up for a breath and returning in a similar fashion. Furthermore, I am almost positive that I saw some white patches on the black bodies that I could see. For this reason, I am nearly 100% sure that I saw a pack of 3-4 orcas swimming together, one of them with a very distinct dorsal fin. I think I got the best look at them because I was the first to look through the binoculars and they disappeared for a few minutes, then reappearing further off when other people were looking.

That is one of my favorite things about the ocean, we are almost never positive about exactly what we see with our fleeting glimpses; maybe they weren’t orcas, but I am going to believe that they were.

After watch we had field day that ended with a small celebration of Haylie’s birthday. Cookie made some wonderful cupcakes and then we all received the greatest gift of all, a swim call! Even though the water was quite cold, 18° C, it was tons of fun. It was spent by many repeatedly jumping off the boat and then swimming straight into the queue of people at the ladder, trying to leave the freezing water. Another announcement made by Cap and Kelsey announced that we will be doing the fabled squid jig tonight at 2200. Between that, the swim call, and wanting to watch the sunset, I was worried about getting enough sleep before dawn watch. Luckily a 1 hour nap accidentally turned into a 2 hour nap when I slept through both seating’s of
dinner. A pretty good life when the thing I am most worried about in a day is getting enough sleep between all the excitement and good times.