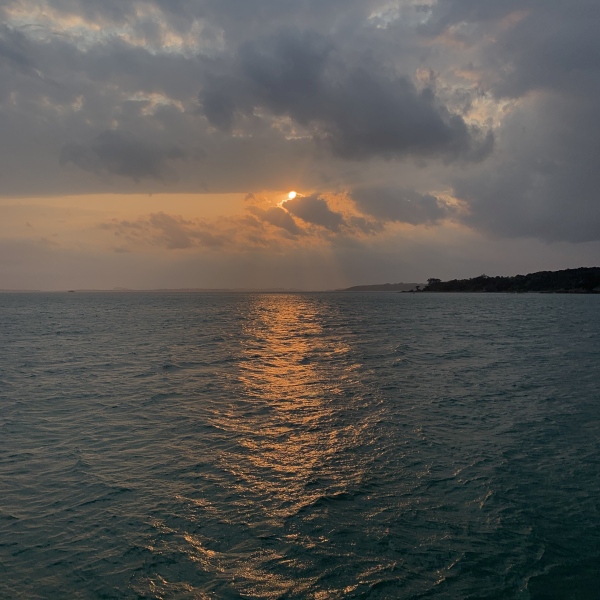 After a long dawn watch the sun comes up.

My day started out fairly normal with a wakeup at 12:30 am to start our watch at 1 am. I got up, put on my foul weather gear along with my harness, ate some cookies from the hutch, and headed up for our usual deck walk before relieving the previous watch group. There was a brisk cool air coming from the south west with temperatures being around 15˚C. For our watch this morning I was on deck; my first task was to be on helm and make sure we were heading on the course ordered.

About an hour into our watch, it seemed that we were headed very close to one of the islands and so my watch officer, Hila, made the call to jibe so we can steer away from the island. My watch mates made sure to position the Mains’l, the Main Stays’l, the Fore Stays’l, and the Jib were all set to proceed our jibe. As the helms person, I took charge of steering the ship to the course ordered.

As the hours go by, we all eventually switch roles, I was moved to lookout which is where I go to the head rig and stand watch for any other boats. On my last rotation for watch, the sun was coming up and it had brightened up increasingly. I was looking out, and it was around 5:30 am, I saw something move from the corner of my eye, I looked down quick enough to see what I hope I had seen, a dolphin!

I yelled out dolphin so that my watch could come and see for themselves. All of a sudden, most of us were standing on the edge looking out for more dolphins. As we kept staring into the water, it seemed that there had been two dolphins swimming across the head rig. I haven’t seen a wild dolphin swim so close to me. It was definitely a good end for my last round of lookout.

On my last shift at the helm; it was maybe around 4:20 am, the stars were coming out and the clouds were caving in. There was on particular spot that caught my attention. There was a “moving star” which one would automatically assume is a satellite, but the weird thing about this “satellite” was that behind it, there was a trail of 30 or 40 more going in a single file line. They just kept coming and coming, I couldn’t stop looking at all of them go by that I had completely forgotten about the helm and so I was about 20˚ off course ordered; Hila relived me from the helm so I can see the them go by. It looked crazier than it sounds but just seeing a line of white dots moving across the sky was ridiculous. There were a couple that were rouge that went into a different direction but it was still so cool to see. Our watch noted that if there were to be an alien invasion, then we saw it first. After a surprisingly eventful watch, it was time for some breakfast as well as bedtime!

Shout out to my family of course, I hope you guys are doing well! And don’t give the cat too much food please! And also I would like to give Ryan a happy birthday shout out! Happy 19!