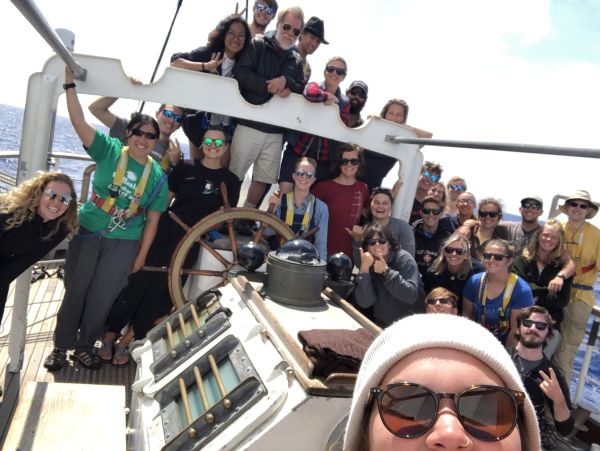 Hi readers.  I reckon that today’s blog title makes little sense. So let me explain; these are what I think should be the subheadings to fragment the past 24 hours. We’ll get to it soon. 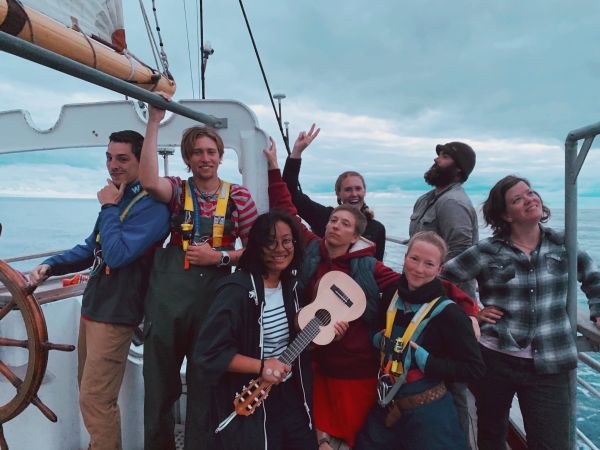 My newly formed band, the Velellalands, minus Torey who disappeared before this picture was taken.

The remainder of the sun’s rays quickly dissipated within minutes after our evening watch turnover. B watch had the deck. With the clouds hanging above us and the wind chill blowing onto our faces, we soon realised that some of us were dressed presuming it to be a fairly warm evening and especially expectant for another beautiful sunset. The promise of seeing the sun set is usually the motivation for B watch to finish galley cleanup as efficiently as possible – we often set a goal to finish by a certain number of minutes. But it was cold and the clouds were grey. Still, for B watch, the odds are high that something fun or ABSOLUTELY WILD would happen after we finished galley cleanup: the last time, we saw a triple rainbow and caught skipjack tuna just as soon as we were done.

I was exempted from galley cleanup yesterday as I was assistant steward and had already spent the whole day working in the galley (I made Japanese curry rice for lunch, my favourite dish). I found myself relieved from the helm and stood down from watch fairly soon enough (good job on cleaning B watch!). After going down below to fetch my mini guitar and our midrats – ginger molasses cookies – I returned to the quarterdeck. I ended up not practicing guitar but conversing with everybody on deck, including Cap, who I learnt was also a fan of my favourite jazz musicians Gene Krupa and Cab Calloway. Somehow, with the pleasant passing of the evening, we (me, Payton, and the staff Ava, Kelsey, Henry, Torey, Emily D., and Duncan) found ourselves being part of an imaginary band called the Velellalands, after the fact that we had been sailing through waters with SO MUCH Velella velella, and taking an album cover picture.

We had afternoon watch today. As per usual, we would have class wedged in during afternoon watch. Cap talked about celestial navigation and I was part of the demonstration as the ‘sun’ (funnily enough, I was also our scientist Duncan’s shadow for the day. The shadow has become the sun!), and we finally took a full S299 picture for the first time after a month being on the Seamans!

After class ended, the rest of watch went by like it normally would. But I’d like to talk more about what happened before watch. An hour before afternoon watch, B Watch had a watch meeting which comprised of (almost) everybody discussing expectations as Junior Watch Officer, but in a French accent (et aussi avec le français parfois) as per our new tradition as B for Baguette watch. We ended the watch distributing the chocolate we won for being the first watch to finish the lab checklist, but not before playing a round of ‘telestrations’ with four different sheets of paper. For those unfamiliar with the game, it’s basically a cross between Telephone and Pictionary. Someone starts by writing a sentence, the next draws a picture of it, and
the next writes a sentence describing it. Not sure how or why, but we ended up with two sheets involving a “keel laser”, even if the first sentence had absolutely no mention of it. Maybe it’s just our special little thing - I think that’s what makes our watch special. Keel lasers, and baguettes.

PS: A shoutout to all the people I know in real life reading this! I realise that I’ve made quite the blunder by just dropping a link without saying anything and then going off-grid. If you somehow made it here, congratulations and hi!