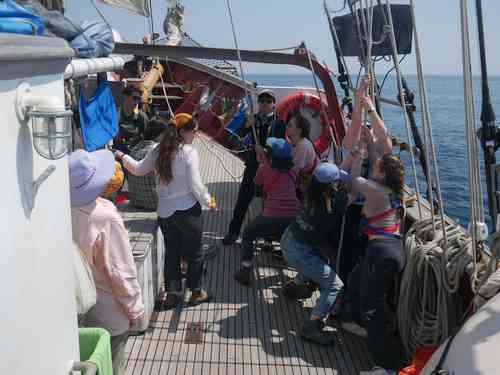 Isabella, Alex E., and Xiaoni prepare to haul away on the sheet alongside student hands and crew.

Man, it’s been quite a day. And it’s only 1333! That’s the nature of being on the morning watch for you. After eating the most delicious breakfast yet (shout out to the stewards for those smoothie bowls), B watch headed up to the quarterdeck to start watch at 0700. It was nice and hot outside, a first as of yet, with clear skies above us, another first given the Big Shrouds of Fog we’ve been dealing with so far. Once we pulled up the anchor and washed it down, we were ready to get underway. Today, our course is taking us to Stellwagen Bank, where we hope to spot some cool megafauna and collect lots of interesting data.

Today marked a big change for us—we’re using the sails! No more motor for us baby, we’re sailing. Getting the sails up for sailing, however, is... not so easy. We had so much to do on deck, we ended up pulling C Watch up to help us. Setting the sails was fine for the most part (my poor noodle arms and back an exception, of course) until we got to the tops’l. Now, the tops’l requires lots of work, using multiple lines from both the port and starboard sides. So, once you finally got your lines set and began to breathe your sigh of relief that it was over, you would have to move to the other side of the deck and do it all over again. As much as I like to complain about the back-breaking—and I mean that almost literally—work inherent to setting up the sails though, it’s probably been the most fun I’ve had so far on watch.

We also got to do a lot of science today! As part of science deck today, I got to make the magic happen firsthand along with some very knowledgeable and helpful scientists. First, we started with the Hydrocast. The Hydrocast is a carousel full of bottles programmed to shut at certain depths in order for us to collectinformation at different levels of the water column. This information can include salinity, temperature, chlorophyll A levels, etc.

After dropping her in and getting her back out safely, we collected samples of water from each of the levels, which we’ll be running tests on later.

Following the Hydrocast deployment, we decided to deploy a neuston tow, which is a net that collects zooplankton from the surface of the ocean. As we were washing the net, however, we were met with a surprise: whales!

Someone saw a Minke whale off in the distance, and everyone flocked to the side of the ship to look. I’d seen a dolphin with Kly a little earlier too, but the excitement of seeing the mega-est of megafauna never wears off.

The surprise whale sighting was soon followed by another surprise: Alex (E., for those of you keeping track), Flo, and I had to get up on the bow and help Karen with the jib sail. If you’re wondering why this is a surprise, it’s because the only thing supporting us while we did this was netting. Oh yes, no more deck for us. Netting. We all clipped in and made our way, a bit shakily at the start, to the positions we needed to assume to wrestle the sail down and fold it up. I made the brief mistake of looking down and seeing how far up we were from the water,  which I decided to ignore for the time being, with varying success. Karen guided us through folding up the net, which we tied up with some lovely square knots  (my favorite knots thus far; if anyone asks you, bowline knots are overrated). Looking out from the bow, I was met with the sight of yet another whale, which was in the process of feeding. Despite being terrified when I got onto the bow, that fear had gone away, leaving in its place excitement and joy. I hurried to confirm watch turnover with C Watch before heading down to have lunch (tacos!), all the while wondering what  would await me on my next watch.