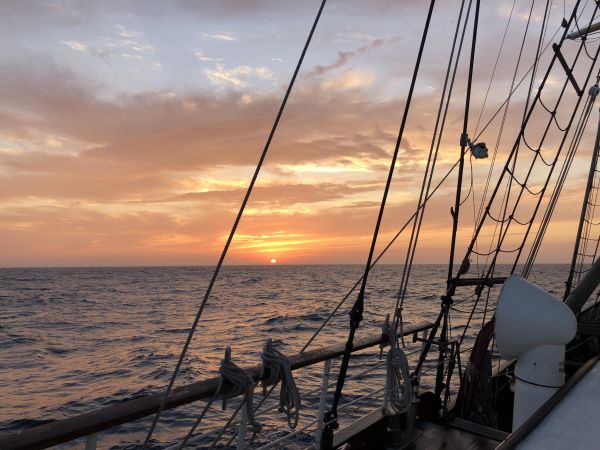 LAC high has mostly worn off. Crew morale was probably the highest it has been all trip. It was a lot of fun seeing people covertly bustling about to make their secret sailor gifts, with some being more tight-lipped about who they had, and others enlisting the help of their friends for information and whatnot.

I myself found a slice of familiarity in Wayne’s World, the little workshop up by the bow that can best be described as “cozy”. As I stood in there filing away at the small piece of pine set in the vise, a small part of me felt like I was back in my garage. I wish this trip was longer so I could spend more time in there and make more little trinkets for my crewmates. 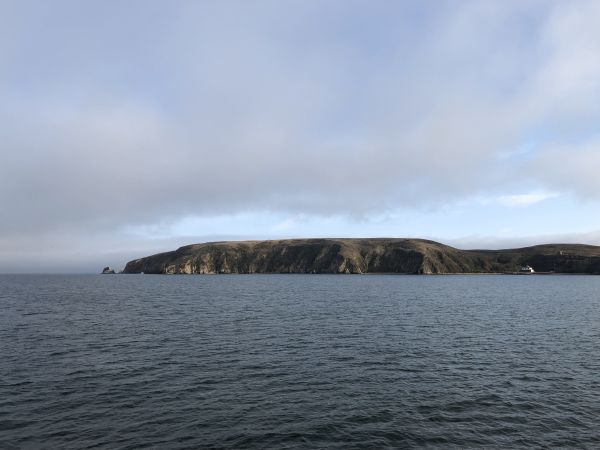 The skies were clear again on the 27th, and that evening many of us witnessed the green flash for the first time. When the last bands of the sun disappear below a crisp horizon, and for a moment the only thing that remains is a bright green sliver as the sun’s rays are refracted by the atmosphere. It was something I had been waiting for all trip, and I am very glad we finally got to see it. Since then, the weather has returned to a dreary gray. It has become much colder now that we have reentered the California Current, which pulls waters from up North. Even below decks it is difficult to escape the chill.

At the end of dawn watch yesterday morning (July 28th), A-watch was granted a momentary reprieve with one of the best sunrises we have had on this voyage. As the disk rose from the horizon, it lit the previously pink sky and clouds a magnificent orange, making it look like a forest on fire. The moment was only broken when someone began jokingly singing Circle of Life from The Lion King. The skies were once again overcast by the time breakfast was over. Despite the spray, pitching deck, and humidity that suggested our clothes wouldn’t dry at all, myself and two watch-mates decided it was the perfect time for a post-dawn watch laundry party, because we’re A-watch and we like to make our lives difficult.

Our wizard of a steward, Cookie (and her assistant for the day being our hilarious watch-mate, Lexi) once again cast a spell or something and conjured up an incredible butternut squash risotto with sweet sausage. It’s calories and warmth filled us up and prepared us for night watch, as we stepped on deck into a fog so thick that the sails and nav lights cast shadows through it. For about 20 minutes around midnight, the fog actually cleared up, and we were met with a canopy of stars and a pale yellow moon (I guess it really is made out of cheese). The fog quickly consumed us again, but it has joined the -other images that I will remember forever.

This morning was not much different. When I walked out on deck the fog was so thick that visibility was less than 200m. There have been numerous sightings of megafauna however, with a whale and a pod of playful dolphins appearing earlier, and porpoises and a single shark appearing within the past hour. This sudden increase in marine life is due to us passing over the Cordell Bank, which is a seamount in the California Current that experiences a lot of upwelling. We just did a science station over the Bank in a crazy algal bloom. The complete lack of visibility has complicated our LAND HO competition, where people were betting when we would first sight Point Reyes. Most calculations made yesterday for the contest have been rendered completely moot.

1030 UPDATE: My blog writing was interrupted by Nathan coming into the saloon to get extra hands to strike the main. We are 20 miles away from land with no wind, so it sounds like we will just be motoring our way in. Visibility was much greater when I was just on deck though, and the sea had this strange silvery look to it.

UPDATE: LAND HO! The cliffs of Point Reyes were sighted around 1230, making Becca Cox the winner of the bet with the closest guess of 1200. She will have the honor of being the first person to set foot on land tomorrow. We furled the stays’ls and continued motoring towards the cove. Marine life became even more abundant. Birds flocked by the dozens, jellyfish floated by, and a few humpbacks made appearances. While the cliffs were visible, the Point Reyes lighthouse was obscured by the low hanging fog. 3rd Assistant Scientist and Professional Viber Duncan Jackson’s parents greeted us as two small specks waving a flag atop the cliff.

As we rounded the Point, we could see the beaches where hordes of elephant seals lay. There was an opening in the sky right above the beach which, once we anchored, expanded to a full blue sky. Chief Engineer Henry and First Mate Ava set out in the rescue boat to find us a suitable landing spot for tomorrow. We had our first “all hands” dinner on the Quarterdeck since San Diego. It was nice to not eat on gimballed tables for once. I found myself staring at the cliffs and admiring their features. The rock layers, sparse vegetation, and different stone colors gave a level of crisp detail that we haven’t seen in 33 days (the last time we saw land). As much as I don’t want this trip to be over so soon, I am just as eager as my crewmates to see something other than the ocean horizon and set foot on solid ground (and as my friend and watch-mate Sophia stated: “Walk more than 100ft in any direction”).

PS: Another shout out to my grandfather Bill McKay! You are the reason I am on this ship, and I can’t wait to get my pictures developed and show them to you. I have many stories to tell and I regret not writing them down. I will have to start that so I remember even the more mundane parts of our voyage. I wish my camera could capture the