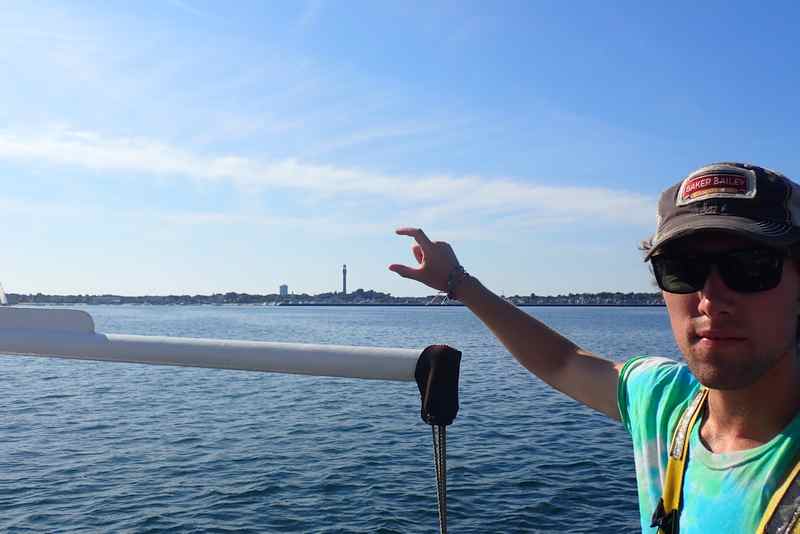 Matt (C297c RA [shore] and Deckhand [sea]) attempts to take a cool photo of a building on the Provincetown Coast. It does not work.

Description of Location
Anchored off of Provincetown

Today we started our first “real” watch rotation! We’re not in A, B, and C watches yet, but we’re easing into the routine. We’ve been split into starboard and port watches, and during the day we got to take care of the deck and lab. Midway through the first watch (Starboard) we passed through Cape Cod Canal. It turns out that we are a very popular ship. Lots of motorboats and small vessels would pull up next to the Cramer and take footage. On the second watch (Port), we carried out a Neuston Tow, and caught a lot of zooplankton. Some favorites were Larry the Lobster, Herb the Pipefish, and a particularly large Isopod that we referred to in hushed tones as “the arsonist” (they were two centimeters long!).

We also trained to go aloft the foremast. We got up to the first platform. Some people took to the activity well, and others were shivering their timbers. As we dropped anchor in Provincetown, we came across a familiar looking tall ship The Roseway. Communications were attempted, but they proved to be unreasonable people, going as far as to ask us “What’s good” on a whiteboard. When we responded “Chillin WBU?” they had the gall to respond “chillin WBU.” Morse code communication was in order but they all scuffled below deck at 1800.

We settled in at evening to listen to Amy, our 3rd scientist aboard the Cramer, talk about her experiences conducting research in Antarctica. It was very interesting, and we had time to connect parallels to our research training onshore and the neuston tow we conducted earlier in the day. Overall, today was exiting and we hope tomorrow brings more.