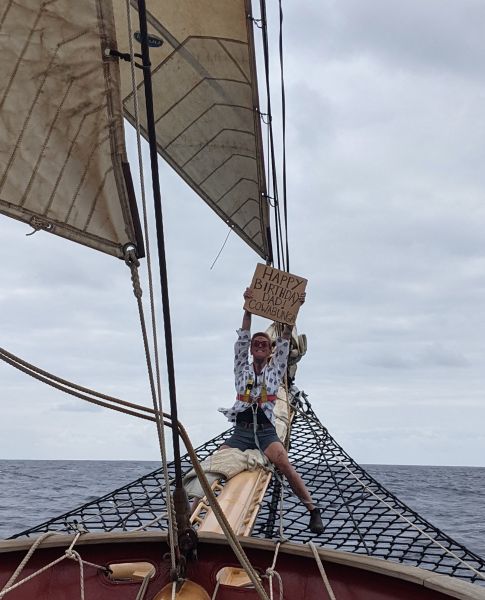 First thing’s first: Happy Birthday, Dad!!! I hope it’s a wonderful, peaceful day that brings you near the water and that the cake is, undoubtedly, delicious. I love you very much. This writing’s for you!

I have spent the last few days wracking my brain about what this blog post would have to say; I wanted to evade the obvious, the aspects of this particular voyage that have become a trifle pedantic as we voyage heroically through what is, seemingly, an endless sky of stratus clouds and a sea of bluish grey, pockmarked by the occasional Shearwater or floating piece of plastic debris, but these tones have colored our experience thus far. Onboard, we joke we will title our first album “Shades of Grey;” it will be composed of a series of atmospheric tracks without vocals, a hushed and muted journey broken by the occasional song of a whale, a distant Finback, but, do they even sing, do they even make sounds? Note that for later research when land and Google regain normality. We all long for the vast, endless sea of stars that a cloudless night brings the sailor over 1000 nm from shore, to shoot the moon and stars with a sextant and gaze in awe and wonder at the billions of stars above. We know they are there. They will be there for a very long time.

Yet, the stratus clouds persist, they are constant companions this journey, broken only momentarily. And, within their persistence, myself and the students onboard contemplate the inky blackness of another dawn watch, the cool breeze of another day, and, as I stood in the shower (a shower on a boat continues to be a unfamiliar and welcome gift), I realized what I would write about, what rings true for this particular voyage; no matter the weather, we are doing something not many people have done before and, more than that, something a hell of a lot of people would have absolutely no interest in doing at all. And yet, here we are, having a jolly good time, sailing this unfamiliar boat full of unfamiliar people into the middle of the Great Pacific Garbage Patch to research micro plastics, teach students how to sail handle and stare at stratus clouds. How very odd!

I have a panache for doing big, vast, interesting things only once, and then moving on to some other big, vast, completely unrelated thing. I have always been like that, since I was a kid, and my shower-musings realized that this is something I like about myself, my relentless curiosity and constant desire to see “Just Around the Riverbend,” to quote Pocahontas.  This trip has hardly been replicated even by Sea Education Association itself and, for me, since I have never worked for SEA before, or tried to sail anywhere with scores of young people, teaching them things, represents completely unfamiliar territory, an unexplored place that I have never been and may never travel again. It is within that realization that, no matter the weather, I can find true value in the raw, baseline experience, and realize we will all, undoubtedly, look back after this voyage and say, at the very least, “Well, I’d never done that before!”

In a world where it is becoming increasingly difficult to find things, and places, that remain unexplored, I am proud of our strange and oddball voyage to the center of the Garbage Patch. We have covered over 2000nm in our first two weeks of sailing and, with no port stops whatsoever on the itinerary, man, how we sail! We have topped out at 9.5 knots so far this passage, careening and flying along in our path to the unusual, charting a course through the starless nights to the center of an unfamiliar sea.

When I was a kid, my Dad and I would undertake “Great Adventures” in our sea green Chevy van, eating pancakes and plotting courses among the sand dunes of the Outer Banks, North Carolina, and my Dad has raised, and championed, my adventurous spirit my entire life. Three cheers to all Dads out there who supported their daughters and sons coming along on this strange adventure, honoring their curiosity and saluting their bravery, and, again, Happy Birthday to my own Pa. May the adventure continue!