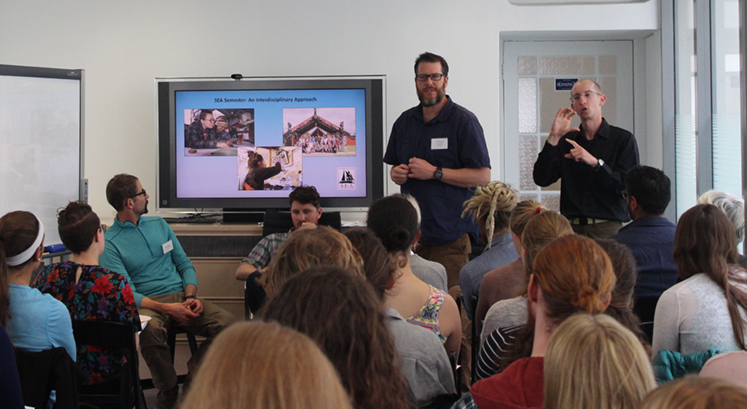 In the fall of 2019, SEA Semester will launch a new program called Climate and Society in New Zealand. According to the course description, this new semester “takes a human-centered approach to climate change informed by the humanities and social sciences, and explores possibilities found within social and political institutions, economic markets, cultural practices, and the creative forces of art, literature, and design.”  Dr. Jeff Wescott, Assistant Professor of Anthropology, explains…

Q: Why was there a need for this program?

A: Recently, we met with faculty from several of our sending institutions to discuss new directions for SEA program offerings. They described the broad interest in climate change across social sciences and humanities majors. We already have an excellent SEA Semester program with a climate change focus, called Oceans and Climate. But that program is geared toward science majors. Our discussions with external advisors, and our own internal deliberations, led us to develop a new program that appeals to non-science majors.

There are courses at Yale, Northwestern, and many other universities that explore the intersections of climate change and human lives, and a full master’s Program at Columbia called Climate and Society. I think the timing of our new program is just right, identifying a trend in how institutions of higher learning are taking an increasingly multidisciplinary approach to the problem of climate change.

Q: How did you get the idea?

A: On the first day of every SEA Semester program, the faculty and staff at SEA attend a program orientation, where we meet our incoming students. We go around the room to each student and they tell us something about themselves—where they’re from, their reasons for coming to SEA, and so forth. We’ve found that in these introductions, many students reveal their desire to understand how contemporary environmental problems affect human societies. This has been true of our programs that focus on the big issues of ocean health—sustainability, biodiversity, and climate change. The Climate and Society program at SEA responds to that interest. Our approach to climate change is rooted in contemporary problems that affect human lives and societies, such as coastal resilience and food and freshwater security. This approach fits well within an experiential learning platform such as ours.

Q: What are the goals of the program?

A: The new program has three primary goals:

The first is to identify climate change as a novel problem that cannot be fully understood, let alone addressed, without the coordinated efforts of scholars across disciplines—the sciences, the social sciences, and the humanities, including the arts.

The second goal is to help our students get a sense of the broad scope of effects that climate change has, and will have, on human lives and societies. Climate change has the power to reorganize economies, politics, human demographics, and everyday ways of living. Climate scholars and stewards need to identify and articulate these many and diverse changes.

Third, we want our students to develop and improve their communication skills. I’ve just described how climate change is both novel and pervasive. Climate scholars need to bear in mind these aspects of climate change—its novelty and its widespread effects—as they educate and inform each other and the public. To be effective scholars and stewards in the era of climate change, our students must become skillful storytellers.

Q: What do you mean by “human-centered approach to solving challenges presented by global climate change?”

A: There are many ways to identify and measure the impacts of climate change in the ocean environment, ocean acidification and sea level rise among the most recognized. But how are these changing marine conditions revealed in the everyday lives of people? A human-centered approach examines changes to the world’s oceans and climate in their social, cultural, economic, and political contexts. But such an approach also recognizes that human societies, our technologies, economies, and practices, have contributed significantly to the current climate problem. Consider the notion of “The Anthropocene,” the age or epoch of humans: the idea that our industries and our habits are written into the natural environment, including the atmosphere.

A human-centered approach then recognizes opportunities, the possibility that if we broke it, we can fix it. Of course, the idea of finding blame and responsibility in ourselves as a species reveals certain assumptions that a human-centered approach to climate change needs to consider: for example, the possibility of shared ethics or morality that assumes blame and responsibility; the differences in the sources of climate change and its impact according to gender, ethnicity, and economic and educational opportunity; and the role of religion, art, philosophy, and media in shaping people’s ideas about what is possible, what can we change, and what is perhaps inevitable or considered a matter of fate. These are fundamental questions to a human-centered approach to climate change.

Sea Education Association is pleased to announce the winners of the inaugural Navigational Star Awards. These awards recognize individuals [...]

SEA Professor of Oceanography Jeff Schell has been named the inaugural recipient of the Henry L. and Grace Doherty [...]

For Immediate Release, Woods Hole, MA, April 11, 2022 This spring, students from colleges and universities around the country are sailing [...]

After more than eight years at the helm of Sea Education Association (SEA), President Peg Brandon has announced that [...]