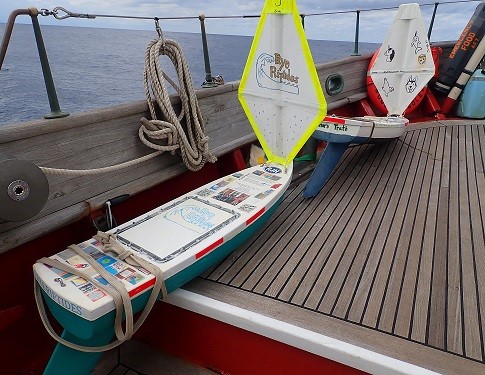 Two miniboats on the deck of the SSV Corwith Cramer prior to launching.

RYE, NH. A 5.5 foot long uncrewed sailboat (miniboat) built in 2020 by students at Rye Junior High in New Hampshire, was recovered in Smøla, near Dyrnes, Norway on February 1, 2022. After 462 days and 13,412 km of traveling across the Atlantic Ocean, the deck and cargo hold were the only remaining pieces of the boat, but the messages inside have sparked a new friendship between schools.

Educational Passages, a nonprofit organization based in Maine, whose mission is to connect students around the world to the ocean and each other, has been working with Rye Junior High School (rjh.sau50.org) since 2018 on this project. The boat, which arrived as a kit (educationalpassages.org/start), was built by the students in Ms. Sheila Adams’ science class as a way to learn about ocean currents, science, and math. “This project tapped into so much more than the science curriculum,” Ms. Adams said, and continued, “The students needed to use their writing skills to inform others about their miniboat project, describe our school and town to people of other languages, just in case, and write requests to get the boat deployed. The students were getting excited seeing it all come together and were about to decorate the boat when COVID sent the students home for the rest of the school year, but they continued to collaborate and see the project through.”

While students were learning virtually in May 2020, Ms. Adams worked with the director of Educational Passages, Ms. Cassie Stymiest, to decorate the boat in a safe and inclusive way. Ms. Adams asked all the students to submit a piece of artwork for the deck of the boat. Each student sent in a piece of artwork that was scanned, printed out, and adhered as a collage on the deck. The boat was ready to sail before the school year ended. “Over the summer, we worked together to try and find a deployer for the vessel that could take the boat out to sea beyond the Gulf of Maine, but found it challenging with all of the restrictions in place,” Ms. Stymiest said. “So we waited until fall and introduced the new 5th grade class to the project virtually. Since they hadn’t built the boat, we found ways to connect them by asking them what color to paint the bottom, and what messages to add to the cargo hold. We also talked about ocean currents and where the boat might travel. I felt connected to the project as well because the students were so welcoming, and I was glad to connect them with SEA Semester to launch their adventure into the ocean,” Ms Stymiest also said.

The Sea Education Association (SEA) in Woods Hole, Massachusetts volunteered to launch the boat alongside another miniboat called Sojourner’s Truth from JFK Middle School in Northampton, Massachusetts. They took the miniboats aboard the SSV Corwith Cramer, which launched the boats on October 25, 2020 as part of the C-294 cruise, “Atlantic Odyssey and Ocean Exploration.”

Captain Sean Bercaw and Chief Scientist Dr. Jeffrey Schell facilitated conversations between the crew and the students over email during the six-week voyage to Florida.

Dr. Schell, after hearing the news about the recovery in Norway, said, “My students really appreciated sending messages back to students onshore and building a connection. Any human connection after all the COVID isolation of the previous year was welcome! I remember October 25th well, we sailed across the Gulf Stream tracking the current magnitude as we went. Once we found the fastest part we sailed back to the chosen spot for launch (about 4 knots of current pointing due east) and gathered everyone to the quarterdeck for the big event. When Rye Riptides and Sojourner’s Truth hit the water there was a raucous cheer from the crew as both mini-boats caught the wind immediately and certainly appeared to be sailing faster than we were onboard the Corwith Cramer.”

After 10 months at sea, the GPS (Global Positioning System) on the Rye Riptides miniboat began reporting intermittently during hurricane season and then not again until September 30, 2021. On January 30, 2022, however, it reported once more from a small uninhabited island in Smøla, near Dyrnes, Norway. Thanks to connections made on social media, the boat was recovered by the Nuncic family who lived nearby.

The boat had been dismasted, and the hull and keel were no longer attached. The majority of the deck, with the cargo hold embedded, was intact and sealed. After cleaning off barnacles that had grown on the boat during its voyage, the family brought the boat home. Karel, who is also in grade 6, brought the boat to his school, Smøla barneskole, the next day. There the students opened the cargo hatch and found the messages and trinkets that the students in the US had added nearly two years before. The moment was captured and shared on the national news in Norway.

“What I find so special about Educational Passages is that it combines education with the mystery of a message in a bottle and the hope of making a human connection across the sea,” said Dr. Schell after hearing the news of the miniboat’s recovery in Norway. He continued, “It is a powerful and effective model and certainly grabbed the attention of my students. Even when our voyage ended in Key West the crew all stayed in touch and periodically shared news of the whereabouts of ‘our boats’. The connection had been made and we now cared about the fate of these mini-boats. So, it really is such great news to learn that Rye Riptides has safely returned to shore, though a bit battered, but its mission an undeniable success.”

Educational Passages and Rye Jr High School are now planning video connections with the school in Norway, and plan to continue building this new relationship to learn from each other and about the shared Atlantic Ocean between them. To read the full story and see what happens next, visit educationalpassages.org/boats/rye-riptides/ and follow other miniboats at sea from educationalpassages.org/events/atsea/.

Educational Passages is a 501c3 non-profit organization whose mission is to connect students around the world to the ocean and each other. Teachers purchase kits with boat parts and supplies, and students build them, fill them with messages and trinkets, install the provided GPS, and send them out to sea to ride the ocean currents and wind. Students follow the track on the miniboat’s very own webpage, and teachers integrate ocean currents, geography, and other topics into their curriculum to connect the miniboat mission. When the boats land, the sticker on them says to bring the boat to a nearby school and connect classrooms. Since 2008, Educational Passages has worked with teachers and students around the world to launch 161 miniboats and reaching at least 29 countries to date.