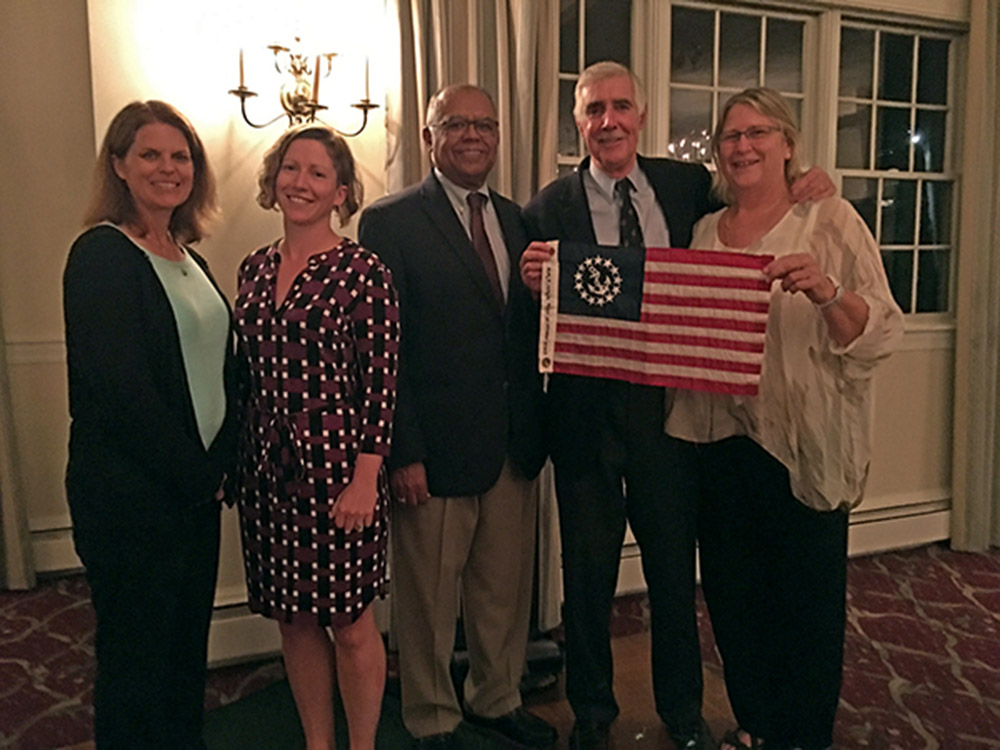 Rich Wilson presents yacht ensign to SEA. His circumnavigation inspired both the SEA audience and 750,000 school children around the world.

Ever since Rich Wilson completed his solo circumnavigation in the Vendée Globe 2016 ocean race in February, his friends at SEA have been waiting to hear the details of this inspiring adventure.

Wilson, a longtime SEA trustee and overseer, obliged them last Sunday when he addressed the SEA Semi-Annual Dinner at the Coonamessett Inn in Falmouth.

Wilson was the only American to compete in the race as well as the oldest participant. He completed the race in 107 days. His 60-foot boat, Great American IV, twice achieved frightening surges in excess of 30 knots as Wilson sailed through the stormy Southern Ocean. Throughout the race, Wilson said he averaged just five hours of sleep in a 24-hour period, usually through short naps of 20 to 45 minutes each.

Following his talk, Wilson presented a yacht ensign flown aboard the Great American IV during the race to SEA President Peg Brandon.

Wilson's sitesALIVE! educational program reached 750,000 students in 55 countries during the race, through daily ship's logs and audio reports, weekly essays, Q&A, photos, videos and webinars, all based on a 15-week curriculum. All of the content was provided in English, French, and Simplified and Traditional Chinese.

Law and Jearld, together with SEA Professor of Oceanography Dr. Jan Witting (not in photo), served as experts who contributed essays and answered student questions. Law and Witting each led webinars, attended by students around the world, one on microplastics in the ocean and one on climate change. Other educational topics focused on history, geography and math, as well as perseverance, preparation, and goal-setting.

Zike was the sitesALIVE! Program Manager and maintained the sitesALIVE! website and social media channels to connect students around the world to this unique educational opportunity.

The ensign will be displayed in SEA’s Madden Center in Woods Hole.