3 Hours as a Shadow 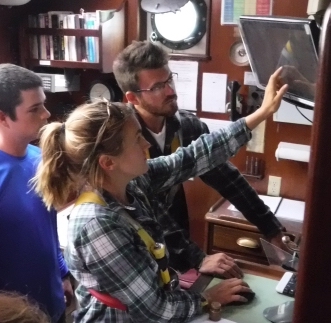 Julian looking at the radar as a shadow with our watch officer, Kate; Ashby looking on.

When applying to SEA Semester, I thought that I would be missing out on the experience to be surrounded by a new culture and language to the extent that those studying in non-English speaking countries have. However, I quickly realized that living on a tall ship does require learning a new language of sorts. For the first few weeks I was completely lost when the mates would talk about different sailing terms, lines, or locations on the boat. While I knew it would take some time to learn the new language, I never thought that I would know it well enough to call out the commands for striking the jib or creating a schedule for who fulfills each role during watch. However, these are the exact things that we are now doing as shadows. Shadows are the second stage of leadership where for half of a watch one student is the mate’s “shadow.” During this time, the shadow makes entries in the logbook, creates the schedule for the rest of the watch’s duties, is in charge of the turnover for the next watch, and overall spends the three hours learning everything they can from the mate.

During my first time as shadow, I was excited yet also overwhelmed by the amount of responsibility that I had to the rest of my watch. The shadow is largely responsible for making sure that everyone is continuously rotated and all important tasks are adequately completed while also ensuring that the mate is informed of everyone’s whereabouts as well as general morale. While I enjoyed my first time as shadow and learned from many aspects of it, I was most surprised by the amount of trust it takes. After checking in with the watch and telling people where they would be stationed for the next hour, I simply had to trust that I conveyed the information correctly, it was heard correctly, and that it would be carried out. Despite the fact that I usually have complete confidence in my watch to successfully carry out their responsibilities, the moment I had more of a leadership role, I found myself wanting to repeatedly check in and make sure I had told them what their next job was despite having just told them. However, during my first time as shadow, every task was completed. This result is a testament to not only the people in my watch group but also the sense of responsibility, independence, and integrity that SEA Semester both fosters and requires. As a result of a successful watch, my trust in my watch group only grew. While knowing that you can trust those around you is important in any situation, it is especially crucial when everyone is standing on the quarterdeck at 3 am when it is dark and raining, there are strong winds, and big swells. In environments like this, knowing that you can trust that those around you are looking out for you, just as you do for them, is particularly reassuring.

Overall, the shadow stage is a time for learning about your own leadership style as well as creating a greater sense of trust and unity within a group. Over the course of my time on this program, we have discussed and read about leadership in one of our classes, Leadership in a Dynamic Environment (LDE). In LDE, the main focus was preparing us for different leadership styles, thinking about what makes a good leader, and discussing how we would respond to certain situations in a position of leadership. After spending weeks taking this class, having the opportunity to directly apply it has been great. In general, what makes SEA Semester so special is the ability to apply what you learn in the classroom in other scenarios. Leadership is perhaps one of the most valuable to consistently work on. It is an experience unique to SEA Semester that I think will serve us all greatly throughout life.