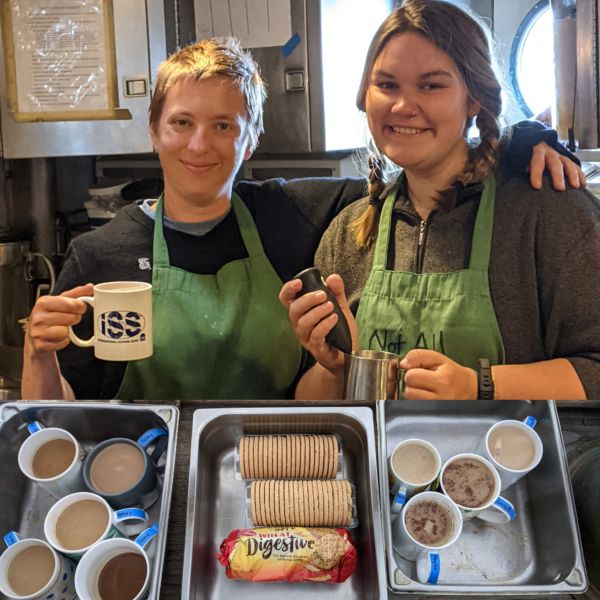 Today was a mighty fine day. Mentally preparing ourselves to reenter the Great Stratus Cloud, we were blessed with another day of sunshine.  Students began to go aloft for fun on their own today, with Andrew, Sarah, and I going up around 11 am today after rolling out of bed. Now that is what you call a top-tier morning routine right there. Roll out of bed, grab a couple of cold pancakes and a handful of trail mix, take a hoved-to shower (meaning that we are doing science deployments and going a screaming 0.8 knots which by extension means you don't have to brace yourself in the shower in order to not fall out of the shower stall, trust me life is all about the little things), and then climb up around fifty feet and watch the clouds roll by. Me oh my am I living the lavish life.

There were a couple of photographs taken (more than two but less than five) but unfortunately were on a disposable camera. Kelsey, our Chief Scientist, also went aloft but unlike the students, proceeded to quite literally run up the rigging to the topsail yard which wayyyy too far off the ground and spend some nice quiet time up there away from the hustle and bustle of daily life down below. Noah and Sophia also went aloft in the afternoon and were thoroughly enjoying themselves as we were sailing along at a nice clip.

In other news, all students took the real deck practical today (after the fake deck practical turned swim call last Thursday) which consisted of written questions which either prompted students for a written answer or a task to be completed. I must preface that before we started the practical, Cap told a story that was "100% true except for the percentage that's not" about the most epic naval battle between the British and Napoleon in the Battle of Trafalgar. The intent of the story was to illuminate the true meaning of the phrase "I am going to go get my brown trousers." Armed with this new found knowledge we all went to our respective starting questions that were posted around the boat, looked at the first question, and all wanted to go get our brown trousers from our bunk, regardless of whether or not we brought brown trousers with us. All that aside, it was a pleasant, mild day outside and we got to eat some savory lemon blueberry scones afterwards which, in my opinion, makes any practical exam worth it, even if we would have received the scones if we had taken the exam or not. As wise men say, timing is everything.

We all know that the world is hooked on caffeine and much to my chagrin, the Robert C. Seamans has yet to lift off like the Jolly Roger and take us to Never Land, so we are no exception. However, this does not mean that there is low quality caffeine being served on this boat. Students and Watch Officers on morning watch today all received "Fancy Coffee" courtesy of Cookie and Emily. Each person sent in an order with directions that would make a Starbucks barista want to grab their brown trousers but Cookie and Emily were up to the challenge and surpassed all expectations. Above is a picture from this endeavor.

Having a lovely time Helming and Hauling,

P.S. Hi Uncle Scott! Kyla here. Just wanted to wish you the happiest of birthdays. Love you and miss you loads