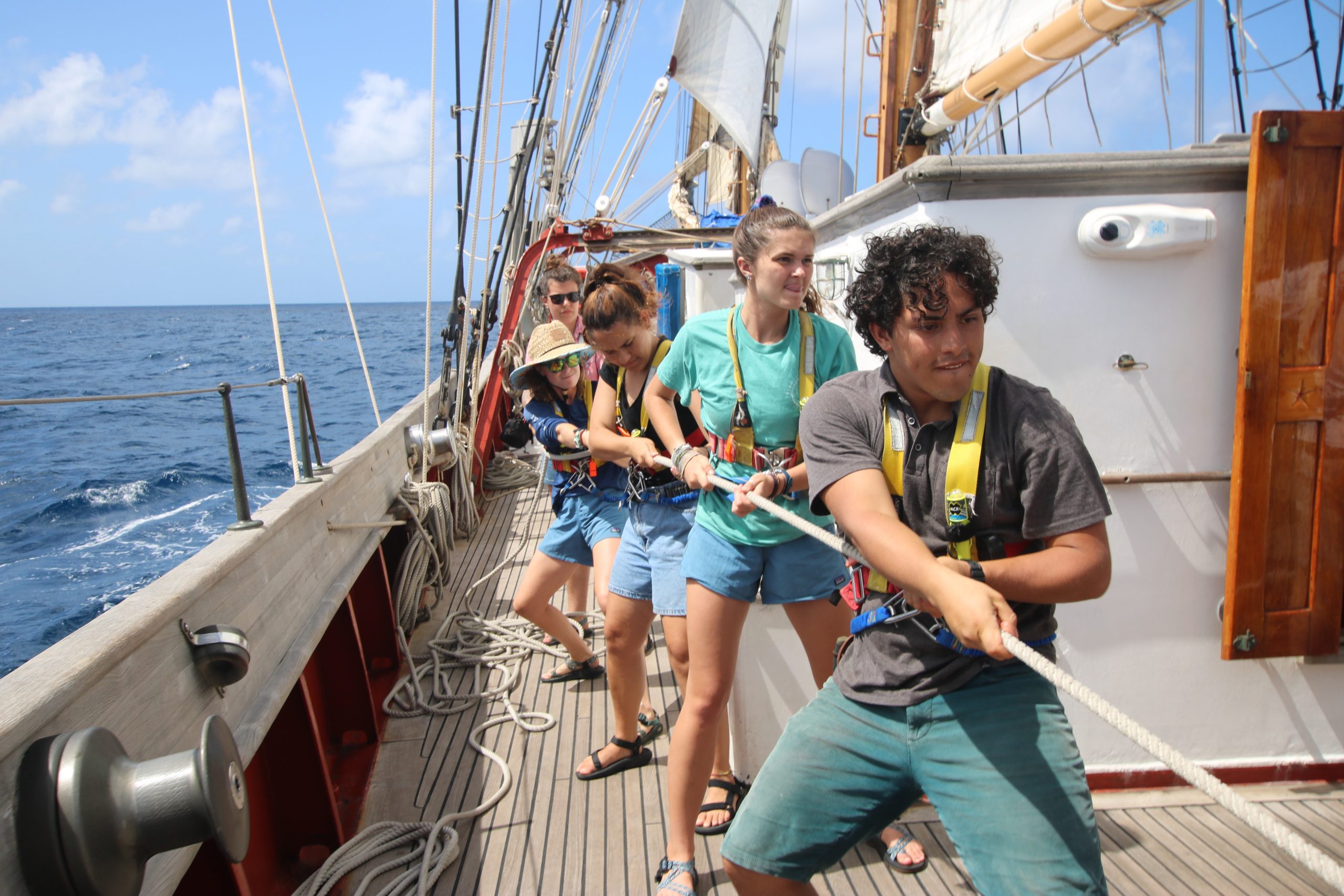 Surveys. I think most people actually despise them. So much that sometimes they try to get out of participating. But try as they might to escape my pestering, I tracked down (nearly) everyone onboard for this one.

As our program comes to a close, we have already begun to send off and say goodbye to dear friends (Sophie, Peter, Savi, Ela, and Leena we miss you already), and I think there’s only one way to sum up this trip of a lifetime, and that my friends, is with a highlight reel…

I meandered through the ship asking every person I saw, sometimes more than once, what their highlight, or favorite moment from this trip would be if they had to choose. Most people said, “woah, that’s a heavy one, let me think about it.” After everyone got a chance to think about it, they came to me with these special (and hilarious) moments:

Crew:
(Captain) Allison Taylor: “I liked sailing fast, like that one time we were doing almost 7 knots after leaving Bequia.”
(Chief Scientist) Jeff Schell: “Sargassum, always sargassum…”
(Maritime Studies) Craig: “The first round of A.H.H. (Atlantic History Hour).”
(Teaching Fellow) MJ: “When Fiona was narrating my actions as I walked around on deck during a whale sighting.”
(Chief Mate) Kevo: “Ryan Seashell and Jordan’s birthday celebrations!”
(2nd Mate, Bosun) Megan: “Standing in the chart house, listening to the watch plan how they would split up the chores, and watching them slowly take over the responsibilities of running the ship. I also really enjoy teatime under the moonlight.”
(3rd Mate) Biz: “Operation Black water… a multi-department cooperation in which we had to drop 2 tanks of black water within 20 minutes and about a mile long drop zone to do it.”
(Mate in Training) Geoff: “Catching ‘Kevo’ the butterfly-flying fish!”
(1st Assistant Scientist) Bonny: “Seeing sea-spiders for the first time.”
(2nd Assistant Scientist) Jordan: “The positivity, enthusiasm, and resilience of this group of students was my highlight.”
(Engineer) Dylan: “Catching the mahi mahi, and seeing yellow fin tuna and lots of other fish! My low was all of the sargassum we caught on the lines (sorry Jeff!)”

Students:
Courtney: “the watch meeting with A-watch when we sat on the bowsprit outside of St. Martin in the middle of that regatta.”
Ela: “The silence of anticipation that takes over the deck while we were waiting for whales to breach.”
Will: “Climbing aloft when we were out at sea and seeing nothing but ocean for 360°.”
Kaitlyn: “Jumping off the bowsprit during swim call.”
James: “Listening to Sophie, Megan, Savi and Adam playing music after our first art gallery off the coast of Guadeloupe.”
Jess: “Manifesting dolphins!”
Anna: “Being on the helm during our sail through Sir Francis Drake’s Passage and seeing the beautiful blue waters, all while trying to avoid spring break traffic.”
Jessie: “Climbing aloft with Savi during the sail through Sir Francis Drake’s Passage with the tops’l up!”
Savi: “Dolphins and whales interrupting class and everyone abandoning the quarter deck to watch them. We all completely forgot about class time for a second and just shared our curiosity and wonderment of the natural world. Everything was exciting, potent and we all share that memory together.”
Greta: “The art gallery outside of Guadeloupe.”
Dillon: “When people come up on deck and play music while you’re on the helm, so you get to just stand and listen in.”
Molly: “Being on the bowsprit and watching the sunset after a long, hard watch.”
Leena: “Sunset by sunset, all of the people who never believed in ‘the green flash’ have begun to take interest and believe in it!”
Henry: “Exploring the Fisherman’s Hut Ruins in St. John.”
Fiona: “Forming lifelong friendships with students and crew alike.”
Kate: “C-watch’s hot chokky (hot chocolate) dawn watch tradition!”
Zoya: “Being silly with your watch mates when you probably should be serious.”
Oscar: “the various ways in which my shipmates move their left arm clockwise in a circle and their right arm counterclockwise in a circle and nod their heads up and down.”

As for my highlight of the trip, it was the night of our Super Moon party off the coast of St. Lucia. We dropped the hydrophone in the water so that we could listen for whales while we all sat out on deck under the huge, full moon. It was the first time that C-watch hung out together outside of our time on watch and it was completely voluntary! That moment made me realize how close I had become with my watch, and how lucky I was to befriend them and the rest of the 35 people who call Cramer home.

There is no perfect way to sum up a trip like this. Unfortunately, you cannot record every second or every detail. When we go home, we’ll all try to explain this amazing adventure to our loved ones and friends, it might be pretty challenging, and they’re going to think we’re crazy. But when you reach out to friends with different experiences and perspectives, you can slowly begin to piece together the story of C-290 and then, it might be slightly easier to explain to others…

I think I can speak for every student on board when I say that the journey of C-290 wouldn’t have been so special if it wasn’t for our amazing staff and crew. They were able to make the best out of a situation that was far from our original plan, and they managed to boost the morale of everyone on board just by being themselves. A highlight reel will never be able to fully sum up the C-290 trip, but it can give you a glimpse into the special, meaningful, and hilarious moments from our trip of a lifetime!

Ps: Shoutout to my family and friends who helped me get here! I can’t believe it is almost over? I couldn’t have done it without your support and love! See you soon!