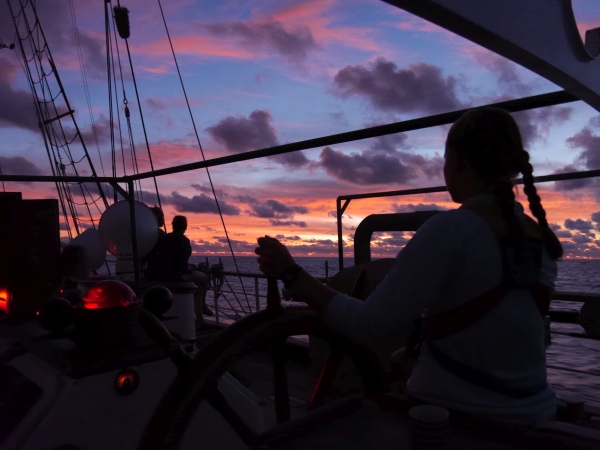 The Robert C. Seamans experienced moderately high winds and seas during the first couple days of our trip, but weather over the last few days has calmed significantly, with wind from the east north easterly direction dropping to a Beaufort force 2 yesterday and sea swell in the range of 3-6 ft. Previously, light winds had led us to use the engine to supplement the sails, but today the wind increased to a really nice force 4 for most of the day—just what this ship loves—and this allowed us to sail without the aid of the engine. It also gave us students more opportunity to learn sail handling (raising and lowering sails, adjusting sails, gybing, etc.). 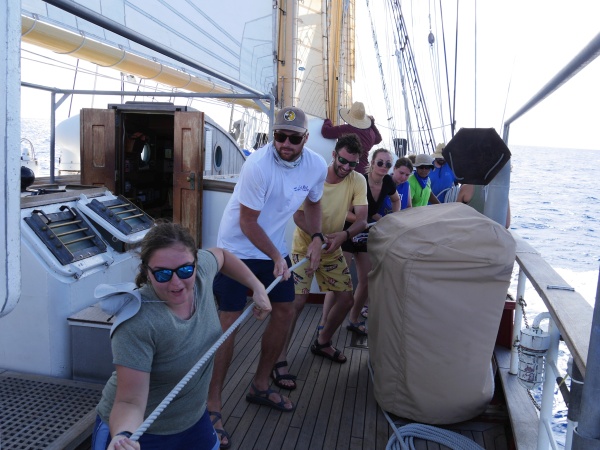 Sheeting in the main during a gybe

My watch group (A watch) was on duty this morning from 0700 to 1300. I was assigned to the lab—my first time at this station. While the rest of A watch got the ship hove to (sails backed, ship drifting sideways with the wind), we deployed a Secchi disk and the Niskin carousel. The Secchi disk is basically a weighted white plastic disk that we lower into the water until it just disappears from our sight, which helps us determine how far light penetrates the water—since it must reflect back to us in order for us to see it, we infer that the light is penetrating to twice the depth at which we can just barely see the Secchi disk.

The carousel holds a ring of bottles that are programmed to close at different depths, giving us a sample of the water at each depth, which we then measure for pH, chlorophyll-a, nitrate, and phosphate. After these were done, A watch got the ship moving again at a steady 2 knots in order for us to do a Tucker Trawl. A Tucker Trawl is 333 micrometer mesh net with a rectangular mouth and a small bottle on tail end. It collects planktonic (non-swimming) and small nektonic (swimming) organisms, and is especially interesting to us because students have been monitoring tuna larvae in PIPA, which is one of the things that this net catches.

Keeping the ship at a steady 2 knots during the science deployment was made possible by skilled watch officers and quick sail handling. After our watch ended, we had pad thai and papaya salad for lunch, courtesy of our awesome steward Lauren and her student assistant for the day, Carol. A long morning of doing science deployments in the tropical sun meant I was sweatier than usual, so I went out on the foredeck and took a series of saltwater showers. In between my showers I watched a Masked Booby (a type of seabird named for the black bands around its eyes) circle the ship, which was now underway at about 6 knots.

The nice steady wind we were experiencing called for more sails to be put up in order to take advantage of it, so during the afternoon B watch raised the fisherman, which is a large sail that goes above the Main Stays’l and between the two masts. The Jib Tops’l had been raised by A watch in the morning, so now we had all the ship’s in-line sails (as opposed to square sails) set for the first time on the trip. When we raised the fisherman the ship’s speed jumped about one whole knot, and for a while we were sailing at 8 knots under sail power alone! When I was on the foredeck I could see the bowsprit, which is a ~15ft power pole-sized steel pipe, quivering under the pull of the Jib and Jib Tops’l that are attached to its tip. That’s a lot of wind power!

For our afternoon class, Cap had us practice gybing, which is when a boat changes tack by turning downwind till the wind comes over the stern and then over the other side of the boat. Each of the three watches was assigned to a section of the deck—quarterdeck, waist, or foredeck--and we all coordinated to “pass” the sails from one side of the boat to the other during the gybes. The lines on this ship are attached to metal pins in the railings, and each line has a designated pin where it can be found. I was glad that Adam (also in A watch) and I had put in a good study session on the pin rail diagram last night by headlamp: today, when the mates were calling out orders, we remembered where the lines for different sails were and what they did.

I’ve been enjoying the feeling of being more used to life on the ship. We are all, for the most part, no longer seasick, and we are quickly learning how to sail and maintain the ship and conduct science data collection and processing. I imagine in a few weeks it will be satisfying to be more coordinated and skilled in these jobs. I am also glad that I have found some time to soak in the incredible wonder and beauty that surrounds us.

It seems strange how familiar the sea is starting to feel, and once in a while I remember that these views are rare. I have a feeling that seawater showers on the foredeck will become a regular routine… I am sending love to my family, and feeling grateful to everyone who has helped make this trip possible.