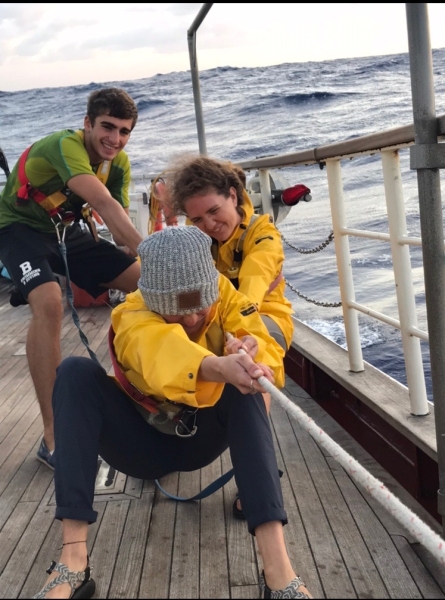 B Watch Setting Sails In the Swells.

B Watch started the dawn watch (0100-0700) this morning remaining  “hove to”.  We all arrived on deck to observe the ten foot swells and 30 knot wind speeds occurring since early yesterday afternoon.  We began the watch with the routine hourly boat checks, checking the status of the ship while looking for any new messes the massive swells have created below decks. Surprisingly, everything seemed to have stayed secure. This was a relief as yesterday the number of spills in the galley and saloon were near comedic.

While the wind was still blowing strong, the dawn watch was rather peaceful. All crew except the eight on B watch were awake, leaving the deck and below very quiet. The moon became extremely bright as it punched through the slowly breaking cloud cover. The ship rolled and swayed, and the surrounding water and the deck were fully illuminated in the silver light.

At 0630 the sun crept over the horizon and painted the sky with vividly contrasting blues and reds. The waves and the winds began to wean off enough that the decision to sail again was supported.  We passed the stays’ls and corrected the rudder to begin sailing towards Vava’u again.  We can expect to see the island group possibly tonight and expected to dock late tomorrow afternoon. I am excited to experience the cultures and customs of the Tongan Kingdom.

As B watch briefly worked the ship, I couldn’t help but notice the confidence in sail handling our watch was displaying. Many of our active sail handling had only begun a few days ago, and the ability to learn has been impressive.  Today at 1430 we put this knowledge to the test during the Line Chase. The Line Chase was a competition between watches to test the knowledge each student has of all the lines on deck. Due to our superior sailing and line knowledge B Watch dominated the event thanks to stellar performances by Glenn and Gabe.

It is currently a few hours before we start the Evening Watch. Sleeping has become an unusual event on the ship. There is no regular sleep schedules as the three watch groups rotate over the four 6 hour periods.  I hope to catch a few more Zs prior to our 1900 to 0100 watch tonight.

Much Love to Friends and Family,