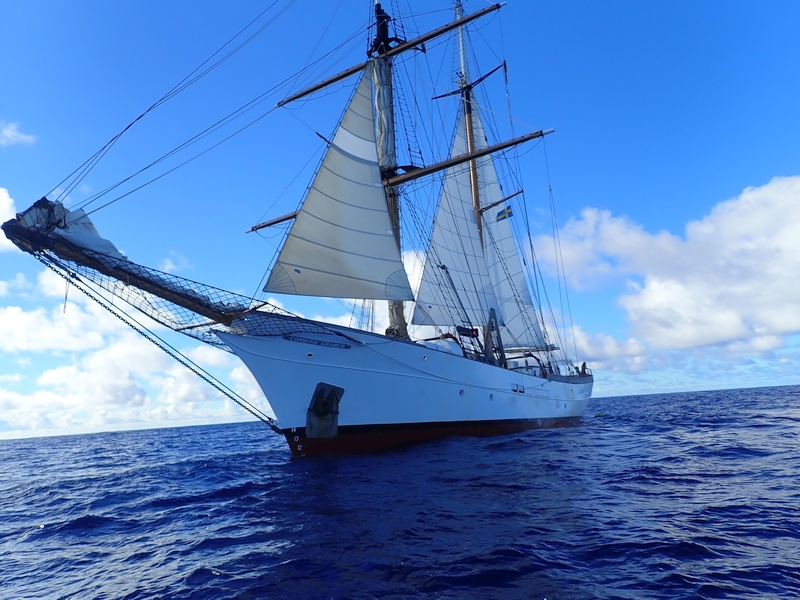 The Cramer sailing under the morning’s clouds

I woke up this morning at around 9:30 and took a shower, which I thoroughly enjoyed after a few days of sweating in the hot sun and in the galley. I then went up on deck and walked straight to the doghouse, where I scrolled around on the GPS computer to check how far we had gone overnight. We were east of South Carolina and passing by Bermuda, which was about 135 miles west of us. I walked up on deck and the sun was blaring. It was scorching hot out today, 30.5 degrees Celsius, or about 87 degrees Fahrenheit. The clouds were amazing, patchy cumulus clouds scattered across the blue sky as far as you can see. The seas were calm and a beautiful shade of blue. I was pleased to find out we were yet to deploy the Secchi disk, so I could still place my bet. I bet 40.5 meters, which ended up being relatively close to Lucia’s winning bet which was a perfect 43.5 meters. 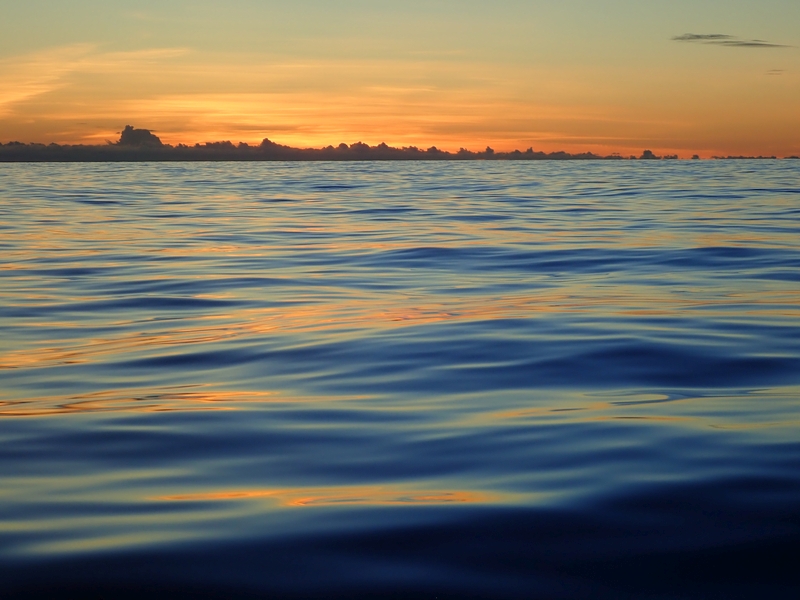 The sun setting over the calm seas.

Out in the distance we could see a large container ship, which a watch learned through the radio was going from Charleston to Hamburg and was in fact carrying containers. It had been over 48 hours since my last deck or lab watch. My last watch consisted of helping out J.C. to check the Cramer’s pipes for leakage, as well as dealing with any other mechanical issues we came across. Yesterday was a long but amazing day in the galley with Adam and Katey, a day full of laughs and onions. Katey and Adam made cornbread, sausage, and banana bread for breakfast. We made molasses granola bars for morning snack, fish tacos with chili rice, purple cabbage slaw, corn salsa and a sriracha aioli for lunch. We continued by putting the finishing touches from our morning’s work, Colm’s birthday cake, a chocolate lava cake that yes in fact, was shaped like a volcano. To top that all off we prepared a beef stroganoff and a kale salad for dinner to go with a French onion soup that spent hours on hours cooking until it had almost more flavor than I could handle.

I had afternoon watch today, which is my favorite watch. Unlike the other watches, you never really have to be woken up early, or be up late, plus there’s always a lot of people on deck, and there’s always a conversation to be had. I was on deck today, and we began our watch like a normal afternoon, waiting for the science deployments to finish up.

During times on deck when I had nothing to do I found myself staring at those cumulus clouds that just seemed to put me in a trance. I’m from the inner city in Boston, so I usually don’t spend much time looking up at the clouds. But when on a boat in the middle of the Atlantic, I find that I am easily by the simpler beauties of our planet, such as the waves that pass the boat, sunsets and sunrises, and the clouds. After science finished up we continued south, motoring, as there was not even enough wind to cause any rippling in the water. We then had class at 1400, and were back on watch at around 1530.

When I did return to watch it was my turn to steer the boat for an hour. At 1600 we were given our afternoon snack, which was refreshing slices of watermelon. When Becca relieved me at the helm a half an hour later I built up a sweat scrubbing the deck to clean the ship that has treated us so well up to this point on our voyage.

The next couple of hours for me consisted of boat and engine checks, before we saw yet another incredible sunset. This was the best sunset we have seen so far in my opinion as it was not just the sun, but once again the clouds that made it so spectacular. The setting sun let of a warm yellow glow which beautifully highlighted the edges of the cloud’s to its right. It was the first time today I could really see the depth and the true 3D form of those clouds. I stared, hypnotized for minutes as the sun finally nestled itself under more clouds on the horizon. Behind us was an almost full moon, which had a reflection that glimmered off the ocean’s glassy surface for a while before the sun even began to set. As the sunlight began to fade, so did our afternoon watch.

For the last hour of watch I went on lookout. For that hour I stood at the bow, looking forward, to see nothing but water, the sky, and the light from a small looking boat in the distance. At 1900 we went below to enjoy the tomato soup, cheesy bread and salad that Katherine, Adam and Katey cooked us. After dinner I spent a little while talking to Aidan, Adam, Becca, Katey and Megan, before I began today’s blog. I have already learned so much on the Cramer, but my lesson for today was that too often we take the beauty of simple things for granted, for example: clouds.

PS (From Max): Hello to any friends or family who are reading this. I miss you all and I’m excited to tell you more but also I’m just as excited for the second half of our voyage. Everyone onboard has been great, the food is awesome, and I’m having a wonderful time. Although it’s a couple days early I just wanted to wish everyone a very spooky and happy Halloween!

PS (From Campbell): Happy birthday Finno! I love you and miss you so much, and wish more than anything I could see you. I hope you have an amazing 21st, and I hope your present made it to you in time! Also we’ve started a D&D campaign on the boat and it’s tons of fun and I’ve decided we absolutely have to play one together sometime. Have the best day ever, you’re now by pretty much every standard (except car rentals) an adult.