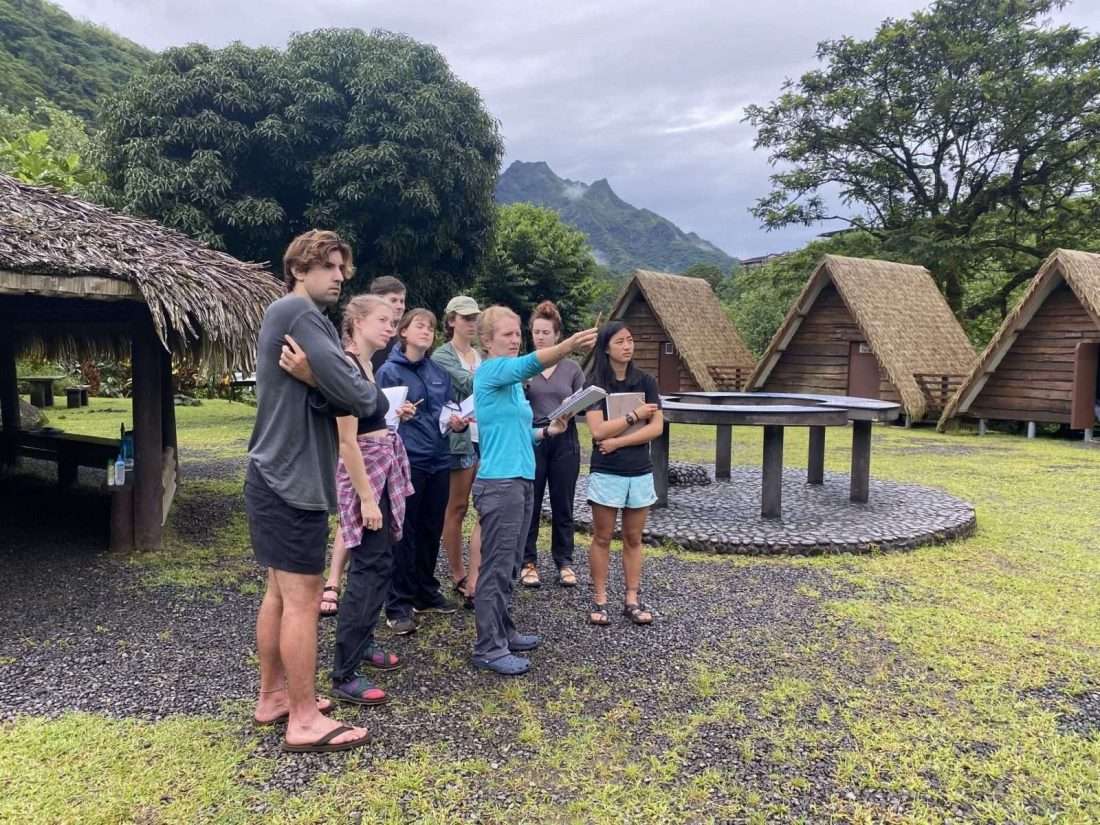 This morning we were up and at breakfast by 7am. Everyone got more sleep than usual, as it was an early night for us yesterday with no after-dinner meeting. We had leftover stew with corned beef, potatoes, carrots, rice and broth. It was still very good! The vegetarians had eggs with rice. and corn. We always have coffee, hot chocolate, tea, baguettes, and fresh fruit available as staples. We’ve been really enjoying a french vanilla black tea.

After our breakfast we spent the rest of the morning participating in an art lesson with our Captain, Allison on perspective drawings and watercolor landscapes. There was a lot of scenery to take in around us, it was the perfect location for such an activity! We drew and painted our little triangular houses, the various plants, and the layers of hills, mountains and peaks. Collectively people were having fun, feeling relaxed, frustrated, and ultimately it was quite rewarding.

Afterwards Allison had us do a quick written reflection on the lesson as well as our time in Fare Hape as a whole. One of the questions was “What has stood out to you as surprising during your time here in Fare Hape?” to which I wrote several things: we were all surprised to learn about the floods that have happened here this month. They have taken the lives of five people, a loss which the community is grieving very much. Roads that lead here have been closed which have altered the plans for the festivities this weekend, which means it will just be those of us who are already here, we have not woken the ancestors, and we are preparing less food. I also wrote that I am surprised that Moohono has instructed us to help fix several maraes, archeological sites made from stones to honor generations of past ancestors. As we are the first group of American students to study here, I did not expect to be interacting firsthand with something so spiritually and culturally meaningful. It has been quite a privilege and honor.

After our reflections, we had baguette sandwiches and fresh pinapple for lunch around noon. Afterwards we had a meeting led by Sayzie to learn about provisioning food for our time on the ship. She told us about a market in Moorea (Mo-o-rea) where we will go before the ship. We focused especially on produce. We will try to consume things in order of how long they will last. We learned that water, heat, and air are enemies in the process of preserving food. We will clean all the produce before we take it on the ship to ensure we don’t bring on an extra insects, such as earwigs which we learned like to live in bananas. The slides with this talk put a lot into perspective, as it showed very large quantities of food laid out in the lot in front of the ship. One photo had probably over a hundred eggplants for example!

After this talk we went on a walk all together to gather some foods in preparation for our feast tomorrow. We searched the grounds for fallen coconuts, ripe enough but not rotten. The sound of water inside is a good sign. So many of them were full of insects. We gathered banana leaves, which we were warned could stain our clothes black with their sap. They were huge, Kamryn held one up for a picture and it was almost as tall as her! We picked Purau leaves as well, which we used to make plates. I have loved so much the ways we have been using various leaves for weaving and other purposes. The palm leave baskets we made yesterday have been put to good use, holding bananas, breadfruit, and Hei (which means garland) which we wove out of leaves as well. Josiane wove a very cute bowl out of palm leaves.

It’s all been so delightful! We returned to our camp and began to do some food prep. We learned to husk coconuts, which was hard work but I felt it was satisfying work. Jack was pretty good at it, he definitely got into the zone. Katie and I peeled and cut up squash for a dish we are making tomorrow, Marley and Frankie prepared Fafa, and Kamryn prepared Auti, two plants used to make parcels for holding things. They look like little presents wrapped up in leaves. Once we opened the coconuts, we were able to try the fruit inside! The sprouted coconut was the most exciting. As a late stage coconut, it has a sweet bit of flesh inside the middle, as well as some coconut cream. I remember Sayzie talking about how fond she was of it, “I would kill for some sprouted coconut!” she had said as we were collecting them.

After those few hours of work we got an hour to do with what we liked. I took a shower and then some of us were reading out books all together in the middle of camp. At dinner we had a chicken and rice soup with carrots. We also had fresh Papaya and more baguettes! Yolanda works here in the valley and has been cooking all our meals for us. I just wanted to also write about how kind she has been to us. She teaches me new words in French and Tahitian everyday. Her birthday is coming up on the 20th, and we are thinking would like to do something for her before we leave here! Tonight, Josiane told me she has been enjoying having students in the valley again, and that it has brought her some joy in the wake of the flooding and loss of life in the community.

I felt very warmed to hear this, as I think we were initially feeling as if we didn’t want to come at the wrong time, to impose ourselves / presence here… luckily it has been the opposite, we have all been doing better together! We are incredibly grateful for the hospitality, especially during a time like this. Josiane, Moohono, Papa and Yolanda have made this so wonderful for us. I have also been feeling a lot of gratitude for Jan, Sayzie, Allison and Jen, for creating one of the coolest programs we could imagine, and helping us navigate through it, with all the highs and lows.