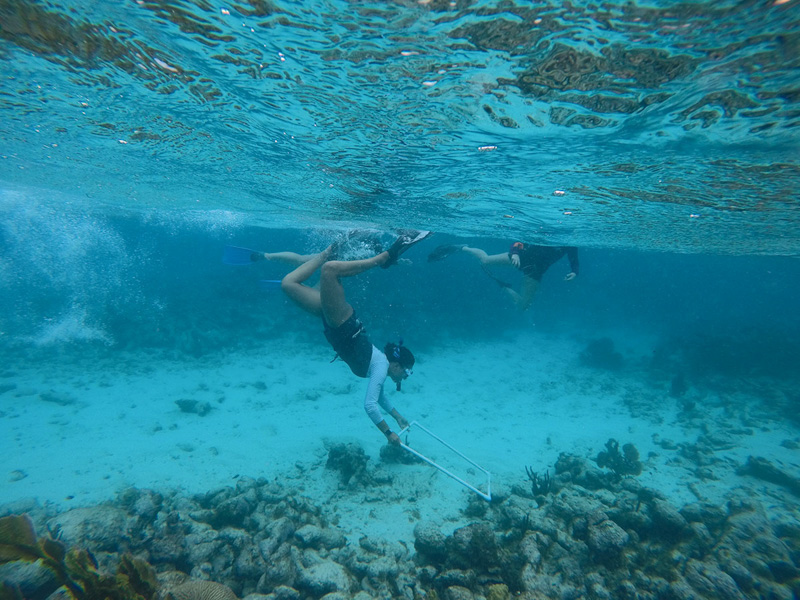 Weather / Wind / Sail Plan
Force 3 winds from the East, seas of 1-2ft from the ENE

Location
Hove to in the waters beside Martinique

While on land in Massachusetts, C-301 chose policy topics to take a deep research dive, writing multi-page policy briefs and developing a presentation you may have attended last month. We chose to examine ridge to reef policy in St. Croix, zeroing in on watershed policies and waste management practices and considering their impacts on marine systems.

Once on the ground in St. Croix, our student community had the opportunity to interview a handful of policy makers and experts who allowed us to ground-truth much of our research.

One of the most striking opportunities to examine watershed policy was the purchase of the Limetree Bay Oil Refinery, which occurred during our last days on shore mid-November. In our research, we found Limetree Bay Oil Refinery to be the primary polluter of St. Croix waters. Located on the southern coast of St. Croix, Limetree Bay Refinery occupies what once was a biodiverse lagoon containing the island's largest mangrove forest. In its long history on the island, Limetree Bay has been found in violation of many laws and EPA regulations, including the Clean Water Act.

With each violation, the EPA hits the refinery with a large fine. Limetree pays it easily, promises to be better next time, and continues business as usual. While an incredible polluter, Limetree Bay is also an economic powerhouse, generating billions of dollars and once holding the title of the world's third largest refinery. Slaps on the wrist proved futile, and in 2011, Limetree Bay was found to have leaked millions of gallons of crude oil directly into the island's sole aquifer. It was closed for many years after, before reopening in February of 2021.

In May of this year, unrefined oil rained down upon the low-income neighborhoods west of the refinery, filling water cisterns with crude oil and covering gardens, businesses, and homes. The plant, once again, announced closure with no plans of reopening.

While we were in St. Croix, Limetree Bay was put up for auction. Three potential buyers bid on the oil refinery; two buyers wanted to scrap it for parts while the third buyer planned to continue oil refining. The result: the refinery will reopen and restart operations next year. It is likely that this cycle of EPA regulation and lack of response by the refinery will continue until another large oil disaster occurs again.

This decision to resume operations at Limetree Bay Oil Refinery in St. Croix came after we met with the crew at the East End Marine Park Visitors Center, eager to hear their professional opinions on the status of the refinery. They hoped the oil plant would be purchased by the bidders wanting to dismantle it, allowing the environment and people to heal from its trauma. However, they did acknowledge the fact that the oil plant does provide jobs to much of the island and the economic boost it provides to the island, especially during the pandemic when tourism, the island's number one industry, was at its lowest point.

After meeting with two employees of the East End Marine Park (EEMP) who work both in policy proposal and marine research, we left with one main conclusion: St. Croix marine policy is inherently reactive. Issues are addressed only once severe damage is done.

One of the park employees, Caroline Pott, mentioned she cannot write policy fast enough to account for the new ways humans find to use and abuse environmental spaces. She noted this leaves the marine environment in a constant state of damage or recovery. This can be seen in the recent case of wastewater management before and after hurricanes Maria and Irma. EEMP employees noted that one of the leading polluters during the hurricanes was wastewater and sewage systems. These systems were constructed during the 1970s and have undergone little to no upkeep. Unsurprisingly, they failed during the storms and were allocated much of the disaster relief funds to mitigate the damage. But it was too late; marine systems were flooded with raw sewage, failed by reactive policy.

Matt Warham, another EEMP employee, noted that while the sewers were repaired, wastewater management in the USVI is still poor and Virgin Islands Waste Management Authority (VIWMA) lacks the funding to update its systems to prevent future damage. They mentioned disaster relief has two parts, the mitigation before and the reaction after. However, funding is only for the latter portion.

We heard another example of this pattern from Dr. Waddell of the University of Virgin Islands, St. Thomas. He noted the island's primary funding for environmental protection comes in the form of disaster relief, distributed only after massive distress has occurred. He mentioned in the age of climate crisis, a disaster relief model will fail islands, stressing that much of this money could be focused on mitigation. Mitigation stands in stark contrast against the reactive nature of St. Croix environmental policy but key in preserving the island for future generations. Much of Dr. Waddell's work focuses on early education in marine science and climate. He seeks to bolster the next generation of land stewards and stresses that this early education component is key in shifting St. Croix policy from reactive to proactive.

We would like to thank Caroline and Matt of the East End Marine Park, as well as Dr. Kim Waddell, for their time and insight into the realities of ridge to reef policy in the Caribbean. These perspectives have been invaluable to us, and we will continue to emphasize local voices in understanding environmental issues.