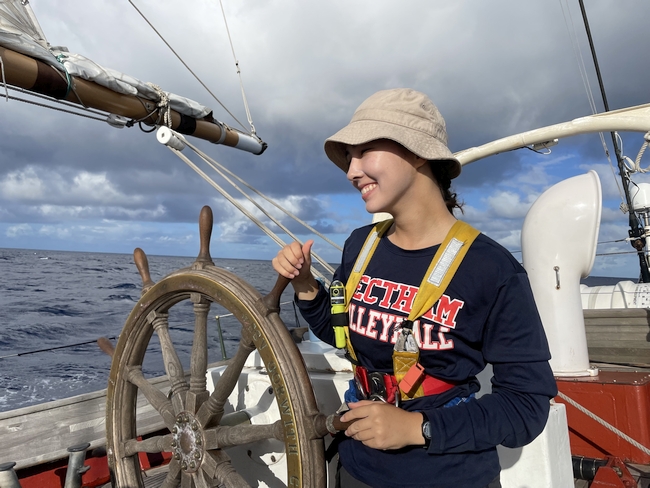 Currently, I am sitting in my bunk in the main salon, chocolate chip scone in hand and in stomach, waiting for our B Watch meeting to begin at 1145. We just had our evening watch last night, and it was probably one of the more enjoyable watches I've experienced! We gybed like four times, suffered through some squalls, and gave each other our "hot takes" during down time. Despite our struggles of being down a member (miss you, Kate!) and half of us feeling seasick, I feel confident saying that B Watch is rockin' it. I love the mini community we built and the amount of support we give each other.

One of my favorite positions in watch is the lookout spot. I love clipping myself in on the black metal bar and letting my weight hold me back like an upright hammock as the waves rock me and the boat up and down. I mentioned in my last blog that it felt like a never-ending rollercoaster, and at the time, I wasn't sure how I felt about it because I don't like rollercoasters. But I think being at the bow so often made me enjoy those extra high rises and falls that make my stomach drop! I also have been singing the Moana soundtrack (thanks to us watching the movie the night before boarding, it's been stuck inside my head ever since) because it seems so fitting. The sunset and sunrise lookout times are the best, followed by the starry night times. Everyone's been talking about the beautiful stars and constellations in their blogs, and I could not agree more. One of my goals is to learn and be able to identify as many stars and constellations as I can, while I can still see all of them (thanks, light pollution back home.). 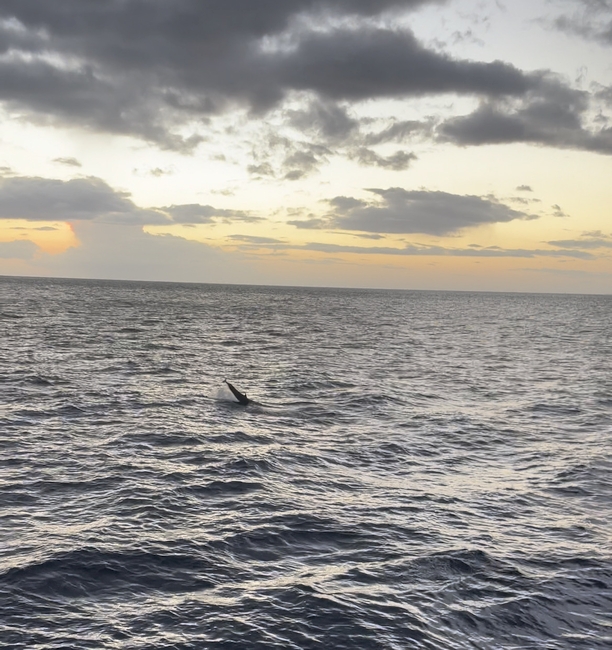 A cool snapshot from the video I got of the dolphin in the distance flicking his tail.

I'd had some days a few days before today when my spirit was at a low. Not for any particular reason, they were just some of those days. But there was one afternoon that completely changed that and filled my "stoke-meter," as we say on the Cramer. After class, Captain Kevo called for a swim call in front of Guadeloupe, which we were stopped at for our science deployments. It was beautiful - the sun made the small houses and trees brighten, and there was a small rainbow at one of the ends of the island. (Fiona took pictures of each of us swimming in front of it.) The island slowly turned even more beautiful when the rainbow extended to almost a completely filled arch around Guadeloupe! It was so beautiful and magical, and it reminded me exactly of Neverland. I remember thinking that I probably won't see something like that again.

After our call I was heading to sleep before my dawn watch when someone yelled "DOLPHINS!," so naturally I made my way on deck. There was a whole group of dolphins swimming next to us at the bow, and they were so close to us! We even saw a baby dolphin swimming next to their momma. I managed to get a video of the dolphins, and I even got a cool shot of one in the distance flicking its tail in the air (right before my phone shut down!). The main event of the night was definitely the two whale sightings. As soon as we saw the blows in the distance, we knew immediately what they were, and called our whale-loving friend Hux to come on deck to see. It was amazing! After a couple minutes of blows and dorsal fin sights, one of them flicked their tail in the air, signaling its departure from the ocean surface. Eli got some cool shots of the tail, and Fiona got a video as well, capturing the cheers from all of us as the whale went down under.

I don't even remember how many days it's been since we first boarded Cramer. It feels like just yesterday, and at the same time feels like we've lived on this boat for ages. It's also so weird to think that we only have a few days left out at sea; I don't think I'm ready to let go of the sailor life that soon.

I was just thinking the other day about how, when I don't think about it, it feels so natural that I'm here and sailing on a tall ship far from home. Then, I really take the time to actually think about it and I'm almost shocked at how I ended up here - I've never been sailing before, so it's almost like an anomaly in the timeline of my life. I'm also so grateful that it is now going to be a unique part of my life. My life plans have always been changing as I grow up, but ever since I was little I had one concrete goal for life - to go on as many adventures and have as many different life experiences as I can. And I think I'm slowly achieving that! A week and a half after SEA ends, I'll be on a plane to Paris for my spring semester. So wild to think about. And so happy to think that I'm making my younger (and present) self proud.

I wish I had more time and energy to share every single thing that's happened to you all reading! Unfortunately, our 6-hour watches and our final research papers take up all of the time we are not sleeping. But don't worry family, you'll hear about everything when I come back.

P.S. Hey fam, doing well! Weird to think I'll be seeing you guys in a week. It feels like I just left. Miss you all! Also, I went aloft! There were many pictures taken, so you will see them when I get back.

Also Aud, I kinda want to build a gingerbread house when I get back. Do with that what u will xoxo