I can see all the clouds to ever exist, or so it feels 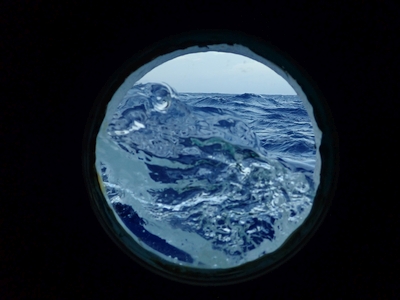 The library porthole, where I am writing the blog

The library porthole, where I am writing the blog

0000: The moon was nowhere to be found, I could not see anything up on deck, and the beginning of November 1st was an early one for C Watch. At midnight, Taylor and I threw in the Neuston net in the water, and by 0018 we were collecting our surface station to measure chlorophyll-a, pH, nitrates and phosphates. Science never sleeps and at times it feels a bit insane, but by now I have had enough practice to be able to put away the Neuston net in the darkness and tie it off with the right knot. At the same time, we were both really tired and found pouring water from a bucket absolutely hilarious, but other than wet socks this had no consequences - we managed to gather all the samples we needed. 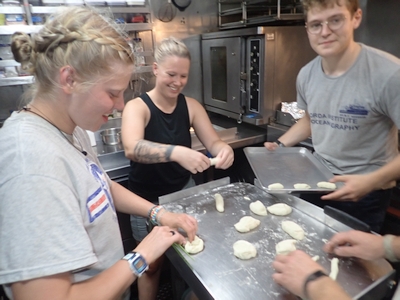 Will (Steward) and Joey (Engineer) make pretzels in the galley for midnight snack.

0100: After watch turnover, we all headed down below to get some sleep. Whenever this moment of rest comes we are typically very exhausted - picture someone laying down on the bench and eating an oatmeal cookie to get the energy to get to bed. It is all so worth it - we really get the hands-on experience pulling on lines, making lab plans at midnight and digging through Sargassum. We battled the warmth of the inside of the ship with little fans in our bunks, and soon the corridors of the Cramer were mostly silent, only lit by the red lights that help maintain your night vision. Up and about was A Watch, making sure our boat checks look good and the scientific mission is fulfilled.

0700: At seven, I got an unexpected wakeup from the 2nd Mate Colin. - Zuza, Zuza, Zuza - Yes? - There is yoghurt for breakfast. It was dark in my bunk and unpleasantly warm. At first I thought I would sleep through breakfast, but when I found out it was yoghurt I got up to get some granola - if there is anything I am known for on this ship, it is that I really like yoghurt. As I stepped out of my bunk, the sunshine was peeking through the hole above the ladder to the chart house. The first meal of the day was great, even though I do not remember much because I was still half asleep. 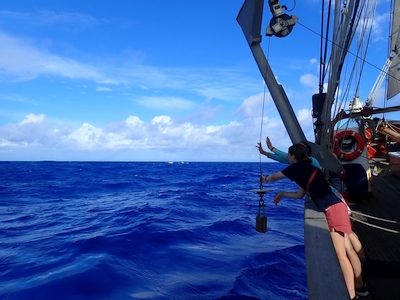 1030: After rolling back into bed for a couple more hours of sleep, I woke up again. This time the ship was fully alive. Up on the quarterdeck commands were given to set a sail, in the main salon a couple of my shipmates were enjoying the last muffins from afternoon snack, and some people were on deck, soaking in the sunshine. Taylor and I did take advantage of the weather, too, but in a different way - we soaked not only in the sunshine, but also in soapy fresh water while doing some laundry on the foredeck. It was windy and felt busy as Ava, Allen, Kayla and other A Watch members set the jib.

1220: We all gathered up for lunch, and by 1240 we were heading up to the quarterdeck for our next watch. We are in the process of switching watch officers, so today we got to stand watch with Captain Allison and Schelly.

1300: It was dish day for me, which means I get to wash all the dishes throughout a six hour watch. It is more fun than it sounds - you get to be in the galley for most of the watch! Oftentimes, it is difficult to find the time to meet with people from other watches because of our schedules, but I got to hang out with Megan, student steward for the day, and talk to everyone in the main salon while putting away dishes.

1430: Instead of class today, we received feedback from our mates and scientists. We meet with them every two weeks to check on our progress towards achieving Junior Watch Officer goals. In between meetings, I got to talk to Camilla and Paige - we all have the same struggles as we dig through all the data for our oceanography projects. Whenever I feel like my project gets overwhelming, all of the sudden there is something new and cool happening, either a new sample or task to be done, and I get really excited to get back to work.

1600: At 1600 I was back in the galley to get some more dishes done. While going up through the lab to gather up any remaining snack dishes from deck, I saw Aida, Brier, and Schelly dig through hundreds of pieces of Sargassum from the Neuston, Taylor spraying the deck with water and the rest of my watch mates scrubbing the deck with brushes (picture us in the place of skeletons from the Pirates of the Caribbean, except it is sunny outside and unfortunately we don't get the background soundtrack). Sometime around 1830, I took a quick dish break and discussed low and mid clouds with Stephanie up on deck. When there is nothing obstructing the horizon, you can see all the levels of clouds near and far away - it is one of the most beautiful things about living on a boat in the middle of nowhere.

1900: By 1930 we were done with dinner, and now I am here writing the blog. This new sleep and work schedule is really hard to put into words because I can barely tell when today started and when it finished. I am sure if you asked any other person on the boat they would tell you something else about November 1st. Perhaps they were up when I was asleep, they were in lab instead of dish, or are just about to start their day as I finish mine.