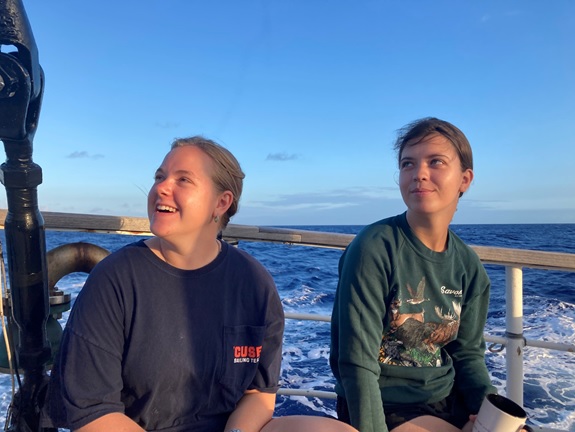 Hello everybody. I’m not sure where to start-so much has happened and it’s all been wonderful. For the past few days in between watch and sleep (which happens less and less now) we’ve been sitting up on the doghouse watching the ocean and stars if they’re out, talking about how we’re all so grateful to be here and reluctant to be leaving one another soon. It sounds so sad when I read that over but I promise it’s not (yet, and to my people at home, who would I be if not prematurely nostalgic? More of that to come.) We still have a handful of days on the ship and I know we’ll make the best of them.

I woke up at 0645 and thought my watch must be broken (no one wakes up that early after evening watch), so I asked Abby, who bunks below me, for the time. A few minutes later I was on the quarterdeck with a cup of coffee listening to Henry say we were likely within sight of land but the dawn sun was too bright on the horizon to see it.

He was right. Within a few hours, the big island of Hawai’i came into view. C Watch  sailed us towards it while I wrote the discussion section of Hillary and I’s paper on diatoms and dinoflagellates, so that by the time my watch (A Watch) took over for the 1300 - 1900 afternoon rotation the big island was well within view with clouds towering over it. We’re in Junior Watch Officer phase, which means students are now leading lab and deck watches by calling deployments, sail handling and, for me today in lab, organizing processing. We processed chlorophyll, pH, and alkalinity samples, scrubbed the deck, struck the mains’l and climbed out on the headrig (big net thing at the front of the boat) to capture a runaway sail tie. In the lee of the island, the waves, which had been knocking us around for a few days, subsided and everyone came out on deck to enjoy the sun.

These days are moving fast, and our final week on the boat is closing in on a slew of deadlines, JWO debuts, late-night conversations (with friends or yourself to stay awake on night watches) and games of how-long-can-I-go without showering without being a complete menace to the boat family?

Last night on Evening Watch lookout, Emily and I were talking about not- normal things that have become normal, every day occurrences on the ship.

Things like waking up to the sound of Nate or Katie or Abby’s voice telling me about the weather at 1a.m. before watch, watching the dinner table swing back and forth as waves knock against the hull and knowing things won’t spill, hearing someone say “turn off the poop” on the daily, that swimming with (small) sharks when you have the opportunity is exciting and encouraged, announcing my arrival in dark places, wearing a bright-orange waterproof jumpsuit, seeing bioluminescence in the waves outside my ‘window’, knowing that at the end of a six hour squall-soaked watch in the dark nothing makes me more excited than going to lab before bed to see what’s sitting in a bucket in the sink (very cool sea creatures).

I still can’t get my mind around the part where someone, daily, hands me the spoke of a wheel half the size of my body to steer a ship carrying 34 people through the open Pacific and says “do your best.” 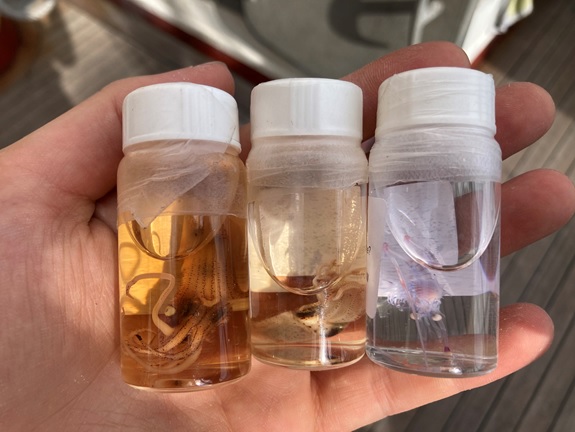 Two squid that were caught in the Neuston tow and a mystery creature that no one can figure out. Not pictured: a bright purple, very pretty jellyfish, tons of tiny zoea (crab larvae, very cute), two tiny nudibranchs (pretty blue sea-dragon/lizard looking things), the Portuguese Man of Wars we’ve been collecting, I could go on.

I’m allowed to do that? And we’re not going to die?

As you can likely tell by now, there’s a lot going on out here. A lot to remember and plenty that I don’t have good words or images to explain.

I’ve been thinking a lot about photographs lately, specifically the ones I haven’t taken. Not in a “be in the moment! Don’t ruin it with a photo!” type of way, but as in there have been so many moments at sea when I find myself suddenly looking at or in the midst of a situation that’s so special I either know a photo won’t capture it or that if I go looking for my camera I’ll miss it. So I’ve been keeping a list. Here are a few: 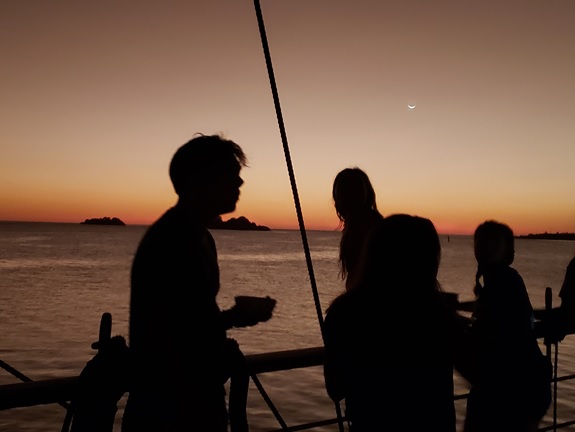 That’s all for now. Thank you to all of the families of my shipmates for the wonderful people you helped bring here.

Mom, Dad, Sarah, I love you and can’t wait to call you after we dock.

Allegra, Viv, Mel, Helen, I have so much to tell you and miss you all tons.