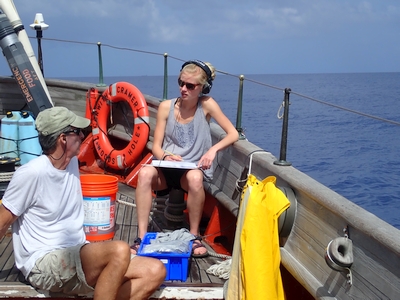 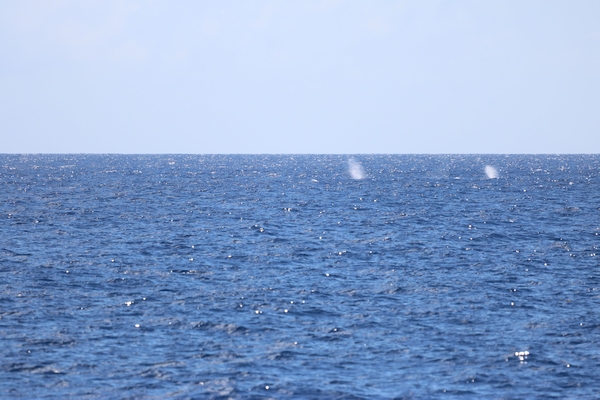 As a SEA alum and former sailing intern/assistant steward aboard Cramer, I feel incredibly fortunate to have had the opportunity to spend the past three weeks sailing with the students and crew of C-290 in a new capacity. With a background in music and environmental studies, I have always been fascinated by sound and most recently by underwater soundscapes and marine mammal communication. Having first heard whale song aboard the Cramer three years ago, I was eager to explore ways of incorporating these sounds into my own musical performance.

My hope is that through multi-media performance, artists, musicians, and scientists can collaborate to advocate for an increased appreciation and awareness of underwater soundscapes while providing a context for marine sound pollution and the ways that it is impacting marine mammal communication. My work aboard Cramer will culminate in a number of multimedia performances with my string quartet (the Halcyon String Quartet) throughout Maine and New England. We will explore whale communication and marine soundscapes through a combination of audio and photography from the C-290 voyage, instrumental interpretations of whale song, images from Peter Stone's book "Waltzes with Giants," and live music. 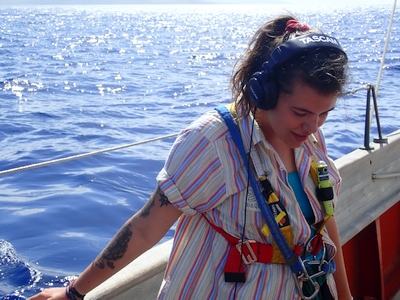 Three weeks ago, I joined the Cramer in Grenada and we set off sailing north through the Caribbean Sea. Throughout the passage, we have made hydrophone deployments at nearly every morning science station. The hydrophone is a small ceramic-encased microphone that is deployed on a ~10-meter cable beneath the ship's hull. By plugging it into a recorder, we record ocean sounds while listening real-time through headphones and speakers. As we sail north, whales and dolphins have become a regular part of the underwater sound world. We first heard whales (we think Humpback) off the coast of Dominica, twice more offshore of Guadeloupe and Montserrat, and, hove-to in the Puerto Rico Trench with over 7,000 meters of water beneath our keel, and most recently under a full moon a few miles off the coast of St. Kitts. The sounds we hear are faint but distinct, and having spent at least ten hours listening on the quarter deck, I've come to recognize a number of patterns and sound profiles. 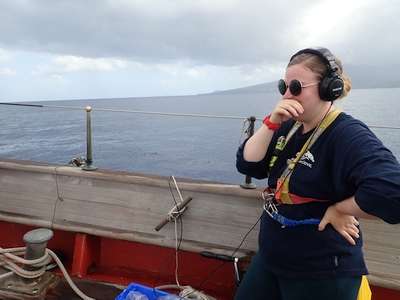 The most common and regular sound I've heard is a sequence of four notes: two upward whoops in quick succession, followed by two more drawn-out lower calls where the pitch bends and drops at the end of each note. This call has been nearly continuous throughout many of the recordings, and is often augmented by other higher pitched whistles (imagine cat-calls), and mottled, more sustained notes that remind me of loons. In each recording, you can hear the hum of Cramer's generator and exhaust fans and usually the regular ping of the CHIRP - an instrument we use to collect bathymetric profiles and water depths. Sometimes we pick up water noises, the sound of rain hitting the sea surface, or the vibrations from strains on the rope which deploys the hydrophone. Other sounds are mysteries we are still trying to solve (the most peculiar so far sounds like horses trotting and clacking along in the distance, perhaps a crustacean attached to the hull of our ship?). The background noise is troublesome but indicative of the challenges of marine sound pollution. Our ship is low-impact in the global context, but it still transmits sounds that mask the soundscape of the ocean around us.

Listening back to the recordings, I've been able to isolate a variety of whale sounds using the Raven Lite and Audacity software programs which create spectrograms of each sound and allow you to amplify or mask different frequencies. Below are three of these sounds - the most common up-call and down-call pattern, a series of whistles and cat-call sounds (both of these clips were from a science station off the coast of Montserrat), and finally, sounds from our anchorage in Grenada where you can hear what anchoring sounds like underwater. The snapping sounds in the anchoring recording (imagine crackling bacon!) are snapping shrimp.

(Audio files are forthcoming once we reach port and can send large files through email).

The past few weeks have been full of learning and observing. We've seen whales, dolphins, blows, breaches, fish, green flashes, stars, a full moon, strong winds, no wind, stunning sunrises and sunsets, and all within the context of sailing this ship that has become a collective home for us. I am so grateful to have been welcomed into this smart, thoughtful, enthusiastic, and funny community - learning to listen, observe, and explore a landscape and soundscape that most people have no real reason to experience. Watching the expressions of students and crew as they listen to the whales, many for the first time, is something I hope to see many times. There is something wonderful and surreal about sitting on the quarter deck listening to sounds that inhabit our oceans - sounds that few people hear or know exist.